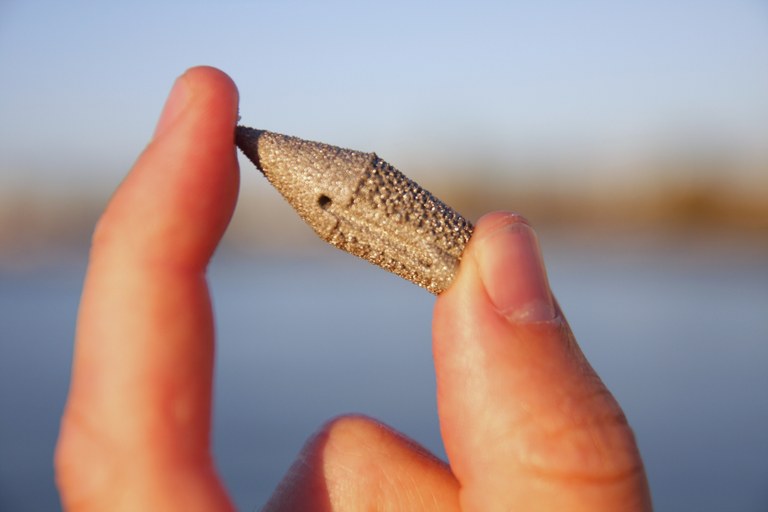 
The new tips are printed from titanium by CSIRO, the Commonwealth Scientific and Industrial Research Organization, of Australia. The prototypes are then shipped to Tasmania, where marine researchers are evaluating them for their potential use for long-term tagging of large fish like sharks, marlin, tuna, and swordfish.

As mentioned, the tag tips are printed using titanium. Titanium is chosen as a key requirement as it resists corrosion, is strong, and is biocompatible with living tissue.

The reason 3D printing was chosen for this project is because traditional prototyping could take months, as each new tip would need machined from a single block of titanium. This created a lot of waste and long turn-around times. Using 3D printing, CSIRO can provide numerous iterations of a given tip design in a matter of days, which greatly speeds up the R&D phase.

“Our early trials showed that the textured surface worked well in improving retention of the tag, but we need to fine-tune the design of the tag tip to make sure that it pierces the fish skin as easily as possible,” says John Barnes of CSIRO’s titanium technologies research team.

Fish tagging is a useful research technique as it allows scientists to follow fish over a long period of time, recording such things as its movements, water temperature, etc.  “A streamlined tag that easily penetrates the fish’s skin, but has improved longevity because it integrates with muscle and cartilage, would be of great interest to our colleagues conducting tagging programs across the world,” said CSIRO marine researcher, Russell Bradford.

Tracks of selected fish, tagged by CSIRO and partner agencies can be found on the CSIRO Ocean Tracks website.