From the Department of Chemistry at the University of Copenhagen:

Dirk Müter is an assistant professor in the Department of Chemistry’s NanoGeoScience research group. He headed the project, which is now now published in Acta Biomaterialia under the title, “Microstructure and micromechanics of the heart urchin test from X-ray tomography”.

Heart urchins (Echinocardium cordatum), also known as sea potatoes, measure up to 5 cm in diameter, are heart shaped and burrow in sand. They extend a channel to feed upon organic particles from the waters above their burrow. Like “regular” sea urchins, these “irregular” heart urchins are soft creatures that use their calcium carbonate exoskeletons to protect their otherwise edible bodies from predation. And as it turns out, their shells are unexpectedly robust.

The idea to study heart urchin shells dawned upon a vacationing Müter while he was walking down a Croatian beach. The paper-thin urchin shells were washed up onto the beach, and Müter observed that they had astonishingly few blemishes despite being so thin.

To understand the sturdy calcium carbonate shells, Müter and his colleagues used a relatively new technology called x-ray microtomography. The technique was used to create three-dimensional images of the material contents, without having to break the shells up into pieces. The x-ray images are so fine that it is possible to distinguish structures of less than one-thousandth of a millimetre. This ultra fine resolution proved decisive in coming to understand the shell’s strength.

Anyone who has ever broken a piece of chalk knows that calcium carbonate is fragile. And, heart urchin shells consist of more air than chalk. In fact, as one gets up close to the shell material, it begins to resemble soapsuds. The material consists of an incredible number of microscopic cavities held together by slender calcium carbonate (chalk) struts. There are between 50,000 and 150,000 struts per cubic millimetre, and in some areas, the material is composed of up to 70% air.

Calcium carbonate can be many things, from unyielding marble to the soft and somewhat brittle chalk that we use to write with. While heart urchin shells and writing chalk share a similar porosity, the urchin shells are up to six times stronger than chalk. Müter’s studies demonstrate that heart urchin shells have a structure that nears a theoretical ideal for foam structure strength – a must for a creature that has evolved to withstand life under 10 metres of water and an additional 30 centimetres of sand.

Müter explains that to their great surprise, heart urchin shell strength varied between shell regions due to greater or lesser concentrations of struts within specific regions, not because of thinner or thicker struts.

“We found an example of a surprisingly simple construction principle. This is an easy way to build materials. It allows for great variation in structure and strength. And, it is very near optimal from a mechanical perspective,” states Assistant Professor Dirk Müter.

Müter and his NanoGeoScience colleagues expect that their new insights will serve to improve shock- absorbent materials among other outcomes. 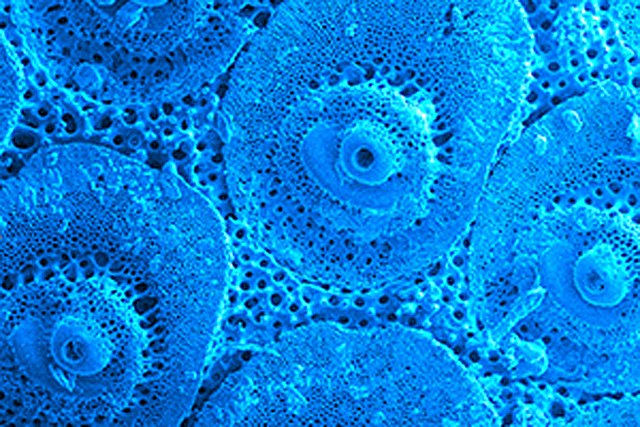