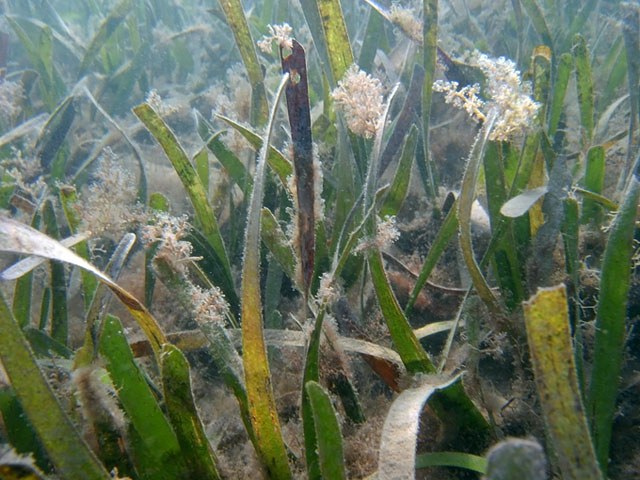 The finding may also suggest that using macroalgae or true marine plants (like seagrass) in reef aquaria systems can potentially increase coral growth rates, especially for aquarists running calcium+CO2 reactors.  Of course, there are many complicated variables involved in closed systems that may not mimic natural environments, so more research is required to understand how macroalgae and plants affect captive environments.

New research could save coral reefs from extinction

New pioneering research by Swansea University could help to preserve the world’s most beautiful and fragile coral reefs from extinction due to ocean acidification.

The research, which is to be published as a paper in the Open Access Environmental Research Letters journal, found that the high photosynthetic rates of seagrass meadows can make seawater less acidic and potentially enhance the growth of nearby corals.

The research was conducted by Dr Richard Unsworth, Research Officer at the Centre for Sustainable Aquatic Research, College of Science, Swansea University in collaboration with scientists at the University of Oxford, the Northern Fisheries Centre, Australia, and James Cook University in Australia.

Explaining the background to the study the author Dr Richard Unsworth said: “Highly productive tropical seagrasses often live adjacent to or among coral reefs and photosynthesise at such rates you can see the oxygen they produce practically bubbling away. We wanted to understand whether this could be a major local influence on seawater and the problems of ocean acidification.”

Rising atmospheric carbon dioxide (CO2) in the air, primarily from human fossil fuel combustion, reduces ocean pH and causes wholesale shifts in seawater carbonate chemistry. Over long-term timescales, this change in seawater carbonate chemistry is likely to cause coral reefs to start to disappear as the rate of erosion starts to exceed growth rates. Coral reefs house thousands of unique species that are found nowhere else on the planet. They provide physical protection for small island communities, and provide food for millions of people globally. Losing these reefs would have serious negative economic and food security consequences.

Dr Unsworth explained that their research models have shown remarkable results. He said: “Our analyses show that in shallow water reef environments coral calcification downstream of seagrass has the potential to be 18% greater than in an environment without seagrass. It illustrates the importance of keeping seagrass meadows healthy and offers a potential tool in marine park management to offset the impacts of ocean acidification (depending on local conditions and habitats)”.

He added: “Not only are seagrass meadows important to hundreds of millions of people worldwide who are dependent upon the food resources that they supply, our novel study suggests that they could potentially, in the long-term, have the added benefit of enhancing the growth of coral reefs under threat of extinction”.