Seeking More Than a Fish Photo

It's the detail in this shot of a Melichthys vidua that makes the image work.

Whenever I photograph fish, my first goal is to get a good, sharp photo of the whole fish with a relatively clean background. Once that’s accomplished, I work to capture something better.
This past January I visited Rick and Terry Loewen of Tropical Reef Corals, Orlando, FL. In their display, they have a beautiful Pink-tail trigger (Melichthys vidua). The body color on this fish is rather plain, but the fins and tail more than make up for it. Triggers tend to be relatively easy fish to photograph because their bodies are large and rather stiff. The tough part about photographing this fish is to retain detail in the body without blowing out the white at the base of that striking pink tail. 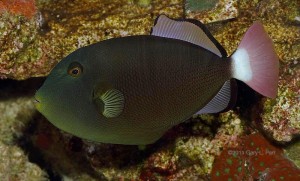 Once I had the “full-fish” shot (left), it was time to capture something better. The “something better” was this “head” shot (above). This shot is, obviously, cropped from the right side. I had to do that because the dorsal and anal fins were showing in the upper and lower right corners and, because they are such a bright contrast from the main body, pulled the eye away from the head.
With the distractions out of the way, I like this shot for several reasons. The primary reason is the detail I was able to capture. The scale pattern, tack sharp eye, visible “trigger,” and the teeth are all things I enjoy. But my favorite part is the pectoral fin and, in particular, the way you can see scales behind the fin.
Here are the technical details. Head shot: 1/200 sec. at f/10, ISO 400, 7D, 135L w/ext. tube, flash. Full-fish shot: 1/200 sec. at f/11, ISO 400, Canon 7D, 135L w/ext. tube, flash.–Gary L. Parr, www.gparr.com, www.reefthreads.com