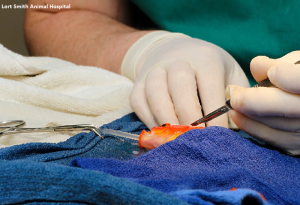 I mean, if it was one of the Personatus angels I could understand, but to each their own. George is a 10-year-old goldfish residing in Australia. His owner had grown so attached to him over the years that she was more than willing to fork over $200 for a 45-minute surgery to remove a life-threatening tumor. Honestly, that doesn’t sound all that expensive, but I’m not well versed in goldfish tumor removal. ABC News reports he’s recovered and “as good as gold”. He should live happily ever after for the remainder of his life (which let’s be honest, is probably another year or two). This reminds me of a hamster I had as a kid that was coming towards the end of her time here when my parents took her to the vet. They came home and told me the vet was doing everything they could for her, that she was on IV getting fluids. In hindsight I realize that probably wasn’t true… RIP Cookie. Glad to hear George is doing well!