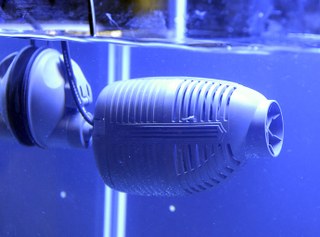 
Seio set out to design a plug-and-play pump with integrated wavemaking functionality.  The Surge Pump features an integrated 4 stage wavemaker which automatically cycles the flow rates between preset “low flow, medium flow, medium-high flow, and high flow” to create a wave-like ramp effect.  The wavemaking hardware is built into the pump itself, so there are no external controllers nor even an external power supply (the power cord plugs directly into your wall outlet).  The pump on display definitely put out a lot of flow and was inaudible (granted, it was in a big public space).

Seio currently plans to release 2 models in the near future, with more smaller models possibly to come.  The largest Surge Pump model (the S10K on display) is expected to retail for less than $100.  While there is clearly a market for higher-end circulation devices such as Ecotech Marine Vortech, Tunze Stream, Sicce Voyager, Hydor Koralia, and Coralife DC wavemaker pumps, we see Seio’s Surge Pump as a promising, cost-effective alternative for the budget-conscious aquarist.