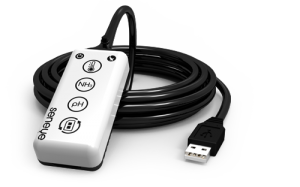 The Seneye aquarium monitor has been all over headlines for the past couple of weeks. After a detailed conversation with Tom Crosswell of Seneye, even more information about what this exciting new product can do has been released. This revolutionary small device is designed to monitor key water parameters of your aquarium, and predict if those are going to be a problem so you have time to take suitable action in advance. This however is the simplest of explanations and as you will discover, it’s got much more up its sleeve and is much more advanced than anything else we have seen released on the market before.

The Seneye device can be programmed to work with any aquarium type though and is fully customisable. For ease of use eight types are pre-programmed. 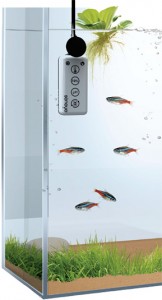 Key parameter ranges for all of these aquarium types are very different, so the device operates differently for each. Seneye are releasing three different models of Seneye device, each programmed differently to meet the requirements of that fish keeper. Each model is designed so that you can select one of these biotopes to use and it will automatically adjusts its ranges to suit it. You can also adjust any of the parameter ranges to suit your own custom needs. The seneye is 100% flexible!

The Seneye monitor is designed to track several key aquarium parameters, and the most important of which is free ammonia (NH3). Many hobbyists overlook testing for ammonia, but it truly is one of the most important things to monitor and plan for in the aquarium. Free Ammonia is in a constant state of flux in all tank systems as it’s produced and consumed, and should be tested regularly at best. Many people simply stop testing for it after their cycle is over assuming that it will never peak again, but they continue testing for nitrate assuming that it is more important. Nitrate and nitrite is the final product of ammonia, so when nitrate or nitrite peaks, ammonia has already peaked and done its damage. Many times it’s assumed that the nitrite and nitrate or dangerous to the fish and cause deaths, but it’s the lingering effects of the ammonia that are usually to blame. Small amounts of ammonia can also be the cause of massive die-off within biological filtration which in turn can snowball into a bigger problem.

Tom brought up something very important about the way the Seneye monitor tracks ammonia. It measures free ammonia (NH3). The common test kit measures NH4 which is actually the less dangerous form, and then attempts to calculate how much of the real danger, NH3, is in the water. Depending on pH though, the proportion of NH3 to NH4 can change, so the test may not truly show how much danger is in the system. Seneye directly monitors NH3 all the way down to 0.005 ppm, lower than any other device, so it can see the free ammonia before it becomes a problem. It’s this extremely low range monitoring that allows the device to act pro-actively rather than reactively. 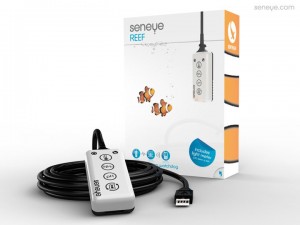 It’s this pro-active care that really makes the seneye different. This device is not just a replacement for water testing; it monitors the water constantly, uses its incredibly low range accuracy and complex algorithms to predict what that means for the future and advises the hobbyist on actions to take. The Seneye monitor uses these predictions to alert you in just about any way you could want including flashing lights, SMS message, email, iphone and just about any other way you can think of. 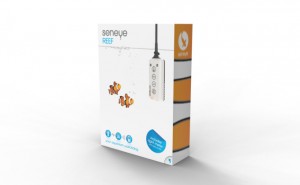 The Seneye monitor is only designed to track critical parameters, so things like calcium, alkalinity and magnesium were not included in the design, but the list of what it can do is still VERY long. Currently they have released the following list of parameters that it can test:

The inclusion of light measurement is the biggest revolution I’ve seen in any device. These parameters control whether massive amounts of life lives or dies in your tank which can in turn save your entire system from massive ammonia spike due to die off. Things like Lux and PAR used to be reserved to those with expensive monitors that rarely exist in the hobby, but with the Seneye, they are just a part of the package. Additionally PAR meters which aquarium hobbyists typically use are actually designed for greenhouses and monitor the sun. They typically utilise a Cosine Corrector to compensate for the movement of the sun, but in an aquarium we are only interested in the light coming from our aquarium lights and not ambient light, this can often lead to incorrect readings. The Seneye device doesn’t use a Cosine Corrector so you get much more precise light readings from your aquarium lights. This list of parameters monitored has already got some very interesting points, and I got the impression from Tom that this may simply be all they’ve revealed yet and that it will most definitely be expandable in the future based on customer feedback. 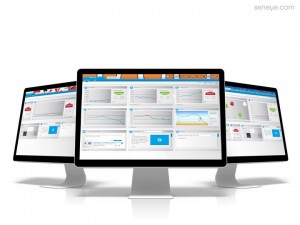 The Seneye is powered by USB, so it can be plugged into a computer or power adapter. This USB connection is what will also allow it to be incredibly expandable. In the future it can be easily updated via the USB connection and controlling other devices by USB may also be a possibility. As Tom explained, “We want to build products people will love to use, so it will be good to see what people want after they have a Seneye device.” They left the seneye device very open to upgrades based on customer feedback, so this should only get better with time.

With a launch price of around $190 in the US this will be a fantastic product that every aquarium owner should have. Seneye are yet to appoint a U.S. distributor, so there may be additional shipping costs to get one over here. 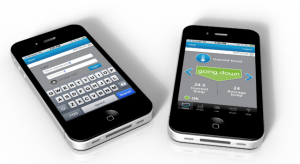 The beta phase signup is happening now! If you would like to get involved, visit their site at: http://www.seneye.com