Shark Attacks On Camera This Week In California And Hawaii 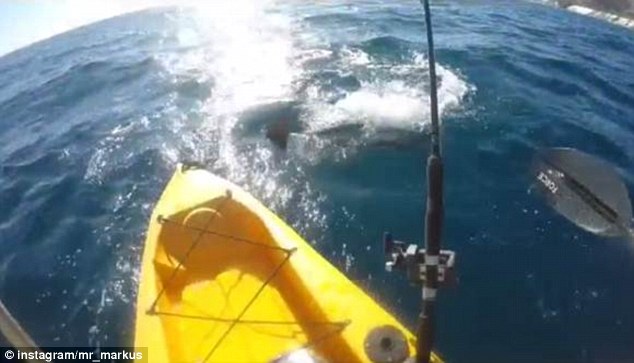 Just a day after the official end of summer, and two more shark attacks occurred in the United States, both of which were captured on video. Despite the spate of high profile shark attacks over recent months, I swim in the ocean at least once a week in hope of encountering one of those beautiful creatures. Yesterday, Mark McCracken, a kayaker off the coast of Goleta, California, armed with a go-pro and paddle, had a harrowing encounter with a hammerhead shark. McCracken said: “I was trolling for bonito yesterday when out of nowhere this tweaked out hammerhead started ramming and biting my kayak. I had to hit him over 20 times before he finally gave me some space but still stalked me for a half mile all the way back to shore.” Watch the incredible video here.

Hammerheads, once rare to see in the waters off California, are now more common. The Hammerheads are following warmer water fish that are moving into California. Meanwhile, in Honolulu, a spear fisherman, Braxton Rocha, was bitten in the leg by a tiger shark off the coast of the Big Island. Rocha was able to swim to shore after the attack and filmed a video of his wound as he was being carried away by paramedics. “I just got attacked by a tiger shark,” Said rocha in a very gruesome video posted to Instagram. It is believed a 13 foot Tiger Shark bit his leg. He was airlifted to the hospital and the last reports indicate he is in critical condition. MORE