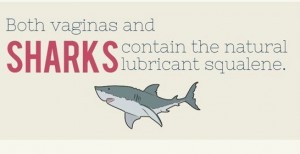 Yup. Squalene, more specifically , which Wikipedia kindly points out is not to be confused with the hydrocarbon and triterpene derived by hydrogenation of squalene, “squalane“. They’re also both extremely dangerous and generally misunderstood.

This biochemical precursor to the entire family of steroids is a 30-carbon organic compound found in shark liver oil. It’s also a natural lubricant found in certain parts of the female anatomy. Actually,  it happens to be one of the most frequent lipids produced by human skin cells, and can also be found in nasal sebum (but that’s not as fun, is it?). Sharks also are suspected to be resistant to cancer due to high levels of squalene in their tissue (they’re not, however, completely immune). Squalene anti-tumor activity in certain animal experiments do suggest cancer-risk reducing properties of the compound (ladies, I wouldn’t take this as license to start bragging about your cancer-curing magical nether regions if I were you, it’s merely a suspicion, though they do act as a tube slide for babies, so that’s pretty awesome).

On another note, since I love to Wikipedia it up, you should donate to keep their site up and independent without running ads. They’re reaching out this week to their readers for teensy donations for this invaluable tool. 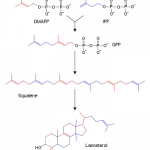 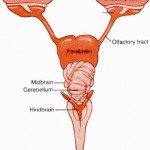 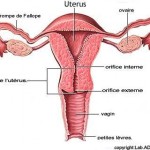