Striped bonito and yellowfin tuna made their grand entrance into the new I & J Ocean Exhibit at the Two Oceans Aquarium in Cape Town yesterday.

This new exhibit has been in the making for two and a half years, so there was much happiness and excitement when the first fish were introduced.  There will still be giant guitarfish, rays, Yoshi the resident loggerhead turtle (a favorite with the kiddies), and many more species introduced over the next few days, but for now, we have very happy striped bonito and yellowtail…and aquarium staff! 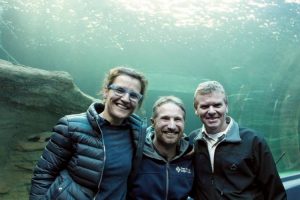 “This is indeed a dream come true for us,” said Dr Pat Garratt, the Aquarium’s retired CEO. “I am very excited because not only do we get a state-of-the-art new predator exhibit, but we’re also able to change our current predator exhibit into a dedicated large shark display. Given that sharks are one of our strongest draw cards, it will be fantastic to show our visitors different species of these impressive and majestic animals.”

Michael, the current CEO is equally enthusiastic about the expansion. “I am absolutely delighted that our plans have come to fruition and that we will be able to separate the fish, rays and turtles from the large sharks. The water temperature in the new exhibit will be maintained at a minimum of 21 degrees Celsius, which will allow us to include some sub-tropical species as well as species from the southern Cape coast. This means that we can showcase a greater diversity of species from the waters off southern Africa”.

Building an aquarium this large is not to be taken lightly and there are many things to consider in order to ensure that it is a safe and habitable space for marine animals.  Watch this space for details of how they did it!