Shed Some Varied Light on Your Reef 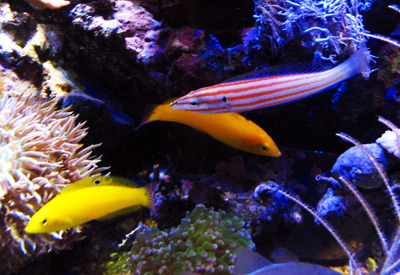 The pair of yellow wrasses attempting to spawn after the lighting change in my aquariumThe other night, as I was watching the debate on TV, I noticed that my reef tank got darker. Just a little, but it was darker and yellower. I opened the front (it is in a wall) and noticed that half the LEDs were out. “Okay, no problem,” I thought. “I’ll fix it in the morning.” The lights were about to go out anyway. As I watched, I noticed that my pair of fire clowns, which have a love-hate relationship, looked like they wanted to spawn. The larger one was trying to entice the smaller one into a bottle “cave.” The smaller one eventually followed, and the pair spent “time in the bottle” (reminds me of a song), swimming very close to each other, although I couldn’t hear what they were saying.As I was watching the clowns, I couldn’t help noticing that my pair of bright yellow wrasses was also attempting to spawn. MORE