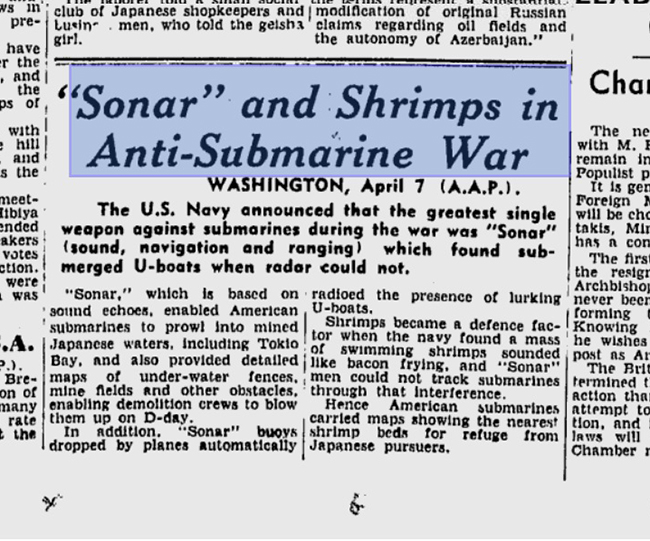 We all know that Pistol Shrimp are very, very loud, but I never knew they had military significance.

I really enjoy podcasts, and there are few I enjoy more than WNYC’s Radiolab for its mixture of wit, science and excellent production.  If you’ve never subscribed, I really recommend it.

Earlier this week, I was listening to an episode called ‘Bigger than Bacon’ and was amazed to hear that Pistol/Snapping Shrimp, en masse, could create enough of a cacophony that a reef rich in them could hide a WWII submarine!  I’ve put a link to the article below, it really is fascinating and also goes into detail about how Alpheids make their signature noises.

If you’re not familiar with Pistol shrimps, here’s a refresher:  Pistol or Snapping Shrimp have one oversized claw that, because of some clever internal anatomy, can close at a remarkable speed to produce a loud ‘crack’ that can scare aware predators, stun prey, and help the animal communicate with other shrimp.

It was always thought that the noise was created by the two halves of the claw snapping shut, but research in 2000 using shrimp filmed with ultra-high speed cameras revealed that one half of the their claw travels so fast, it creates a bubble of air that, due to the speed and pressure involved, implodes to create the noise. As it does so, the gas inside the bubble can, for a very brief moment, reach temperatures close to 5,000 degrees.

This effect is known as cavitation and can be quite damaging; boat propellers, for example, can be damaged from cavitation, caused by nothing more than bubbles.

Alpheid bubbles also create a very brief moment of bioluminescense, that is measured in nano or even pico seconds, due to the superheated gas becoming a plasma. The noise itself has been recorded at over 210 decibels, louder than a gun shot.