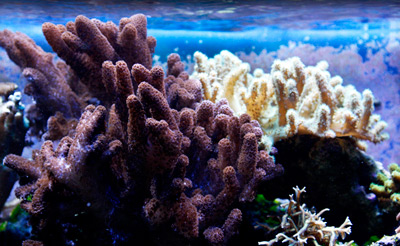 Some soft coral species, such as Sinularia, are well-known for their chemical warfare tendencies

Since corals and other sessile invertebrates are more or less stuck in place and can’t chase away competitors or run from predators, many of them—particularly among the soft corals—have evolved the tactic of exuding toxins into the water to prevent other inverts from encroaching and to discourage predation. As you can imagine, this “chemical warfare,” known as allelopathy, can become problematic in closed aquaria, because even the largest tank can’t remotely approximate the ocean’s capacity to dilute these noxious chemicals. Some inverts subjected to these toxins in an aquarium may be unaffected, others may remain in a contracted state, while still others may become stunted, suffer tissue necrosis, or even die as a result of the exposure.

Of course, there’s no practical way to test for these toxins, and all sorts of environmental issues can cause similar problems in corals, so the challenge from the hobbyist’s standpoint is determining when issues with invertebrate livestock might be attributable to allelopathy versus water quality or some other environmental problem (e.g. inappropriate lighting or current).

Here are some signs that might indicate allelopathy is to blame:

1. Your tank contains a lively mix of soft and stony corals. In the typical “coral garden” tank stuffed with all different kinds of soft and stony corals, it’s not so much a question of whether allelopathy is going on but to what degree it’s going on. In this setting and assuming water parameters and other environmental factors check out okay, “chemical warfare” is often the best explanation for the odd coral refusing to open up for prolonged periods or the occasional inexplicable death or necrosis of specimens.

2. Your tank contains species known to be toxic. Some corals are just notorious for creating allelopathy issues. For instance, among the soft corals, various Sarcophyton, Lobophytum, Sinularia, and Lemnalia species are well known for their toxic tendencies MORE