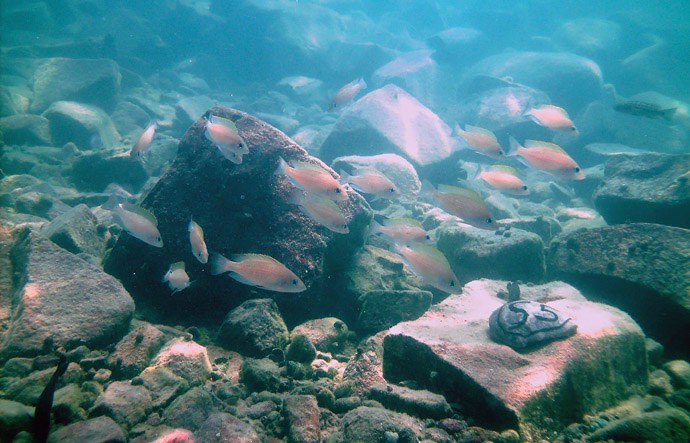 
The manner and routes of dispersal vary with the species and the ecological conditions. Many fish form shoals to avoid predation. Shoaling with familiar conspecifics affords the fish an even greater advantage by increasing the benefit for relatives. This promotes the continuation and future spread of an individual’s own genetic information.

Franziska Lemmel-Schädelin, Wouter van Dongen, Yoshan Moodley and Richard Wagner from the Konrad Lorenz Institute of Ethology studied Neolamprologus caudopunctatus, a species of cichlid fish endemic to Lake Tanganyika, Africa’s second largest and the world’s second deepest freshwater lake. Lake Tanganyika has a surface volume of about 33,000 m², which corresponds to the size of Belgium. The researchers studied the influence of sex and size on dispersal and shoaling behaviour.

Lemmel-Schädelin and her field assistants carried out a number of dives in October and November 2008 to study the dispersal behaviour and relationships of over 900 cichlids. The divers collected DNA samples from the dorsal fins and documented the body size and sex of the fish. An analysis of the data showed that over the course of their lives the females dispersed farther from their parental nesting sites than males.

“To avoid inbreeding and resource competition, it is usual among many animals for one sex to disperse farther from their place of birth than the other. Male-biased dispersal is more frequently the norm among mammals, with females remaining near the original nesting area. Among the cichlids we studied, on the other hand, it appears to be the females that disperse,” says ethologist Lemmel-Schädelin.

Kin-shoaling promotes the spread of an individual’s own genes

The researchers discovered another phenomenon while studying the familial relationships within the shoals. Small – and therefore probably younger – females tend to shoal with female siblings. Small males do not, instead preferring to shoal with non-sibling males. Larger – and therefore older – fish no longer exhibit this preference for kin-shoaling.

Richard Wagner explains this behaviour as follows: “Females disperse around eleven times as far from their parental nests than males. This naturally involves a certain risk for the females. We observed that females tended to shoal with their female siblings. They probably do so in order to minimize the risks of long-distance dispersal and to increase the chance of at least one member of the family making it.”

“Cichlid research is especially interesting from an evolutionary perspective,” says Lemmel-Schädelin. “Africa’s three largest lakes – Lake Victoria, Lake Tanganyika and Lake Malawi – are home to cichlids that are believed to have emerged from a limited source population. The ancestral animals followed the rivers to enter these lakes, where they found a number of ecological niches in which they began to develop in different directions. This makes it possible here to look at evolution in action, so to speak, and to research the emergence of new species and a rich repertoire of different behaviours,” Lemmel-Schädelin explains.

The article “Sex biases in kin shoaling and dispersal in a cichlid fish”, by Wouter F. D. van Dongen, Richard H. Wagner, Yoshan Moodley and Franziska Lemmel-Schädelin was published in the journal Oecologia.

[via University of Veterinary Medicine, Vienna]