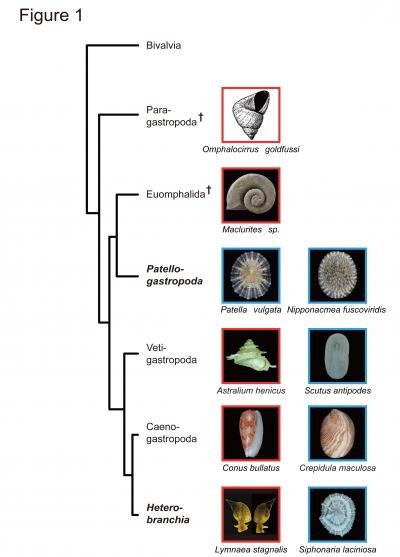 
There are many hundreds of different kinds of gastropods (slugs snail and limpets) – second only in number of species to insects. They have adapted to live on land as well as in fresh water and marine environments, and have altered their physiology to survive in different habitats and to exploit different niches. The ancestral snail is thought to have had a coiled shell but during evolution some snails have lost their shells to become slugs, and some, limpets and false limpets, have independently lost the ability to coil their shells.

In order to find out why some gastropods have straight and some have coiled shells researchers from the University of Tokyo looked at the pattern of Dpp during shell growth. Dpp was first identified in fruit flies where it is necessary for the correct development of limbs, wings and other organs – decapentaplegic describes the 15 things missing in the absence of the gene dpp. Dpp is also found in the shell gland of gastropods, an early structure which begins to form a developing shell. However its presence in the mantle, which takes over shell production as the animal develops, was unknown.

In all four animals tested, limpets Patella vulgata and Nipponacmea fuscoviridis, and the right-hand coiled pond snail Lymnaea stagnalis along with a sinistral coiled lab-developed snail, dpp expression matched shell shape. There was also a Dpp protein gradient spreading away from this which was also symmetrical in limpets but had left/right asymmetry for the pond snails, matching the handedness of shell coiling.

Keisuke Shimizu, who led this study, commented, “This molecular mechanism driving for shell coiling persists from early developmental stages though adult life as the shell is replaced. It also provides an explanation for how shell coiling has been lost several times during the evolution of gastropods by the relatively easy loss of asymmetric Dpp.”