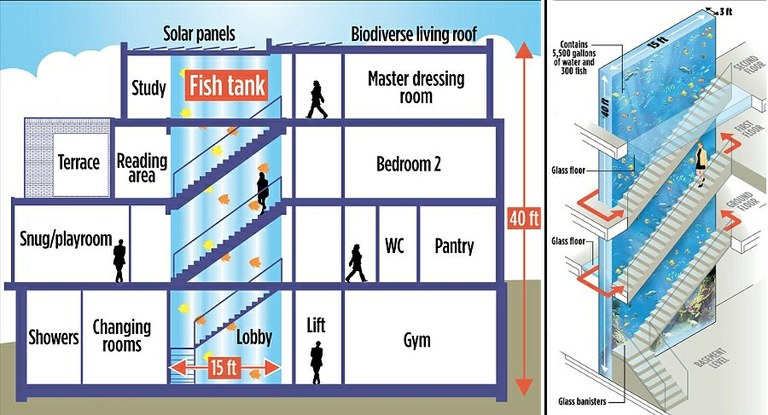 
Talk about a tank build!  As mentioned, Thierry Henry is planning to install this massive 5,500 gallon aquarium into his £6 million London home and is willing to spend £250,000 to do it. For those of you who don’t know who Thierry Henry is, he is a world class French footballer (soccer player) that currently plays as forward or striker for the New York Red Bulls soccer team and has been with them since 2010.

When completed, the aquarium will span four stories and will be built in four sections to give it the illusion of being one massively tall tank. The current planned dimensions for each of the four tanks will be 15 feet long by 3 feet wide. It is also estimated that the systems will be able to house a combined total of 300 fish and will cost £12,000 a year to run, with the bill for fish food reaching £2,500 per year.  He will reportedly have about 2,000 different species of fish that he can choose from for his aquariums: smaller breeds of shark and rays to clownfish, yellow tangs, blue tangs and parrot fish.

Each of the four aquariums will be built out of Perspex acrylic and each will have their own filtration system making the aquariums easier to take care of than one massive system. Obviously with his schedule he will not be maintaining this himself. Instead he will be paying an aquarium service £50 an hour for weekly inspections and tank maintenance.

We look forward to following how this tank build progresses.