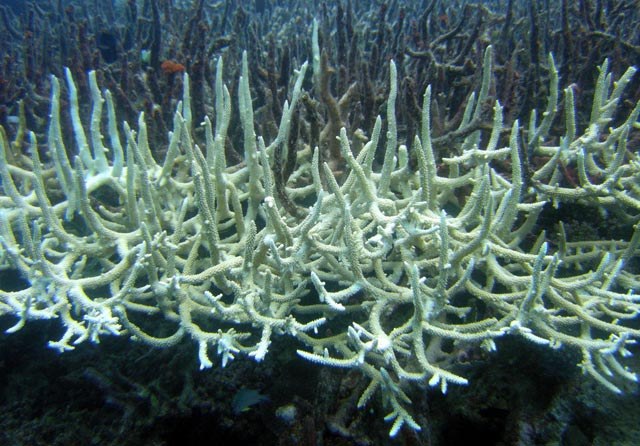 
A coral is about to die.  It has spent well over a week at 6°C above normal water temperatures and it is growing weaker by the hour.  The symbiotic zooxanthellae algae has already been expelled and it cannot take much more of the heat.  Meanwhile its neighbor is also under heat stress and it too has bleached, but it is holding its own against the warm temperatures. It survives five additional weeks after its neighbor gave up and died.  Scientists think they know why.

Researchers led by Paul Falkowski of Rutgers University and Dan Tchernov of the University of Haifa in Israel designed this exact experiment to understand why certain colonies of coral better handle the heat than other corals.  In their experiment they subjected two different Red Sea corals, Seriatopora hystrix (birds nest) and Stylophora pistillata, to elevated water temperatures and monitored the levels of caspase in each coral colony.  Caspase is an enzyme (cysteine protease) that plays a direct role in programmed cell death (apoptosis) and necrosis. The researchers hypothesized that the coral colonies that could handle the high temperatures better were able to somehow regulate the caspase activity levels within their tissue.

What they found was that corals that bleached and died showed a sharp increase in their caspase levels followed by programmed cell death where the coral tissue essentially “melted” off the skeleton.  Those corals that survived, however, showed a marked increase in caspase levels to a point and then the levels dropped.  Following this discovery, the researchers subjected two other “wilting” coral species to identical circumstances but then treated them with a caspase inhibitor.  The corals treated with the inhibitor survived.

“The coral’s survival depends upon whether its cells initiate a self-destruct program in response to its algae’s stress signals [and the] species that can stand the heat will likely be those that populate coral reefs of the future.”

While people cannot go out in a boat and dose large areas of the reef with caspase inhibitors, this research does help scientists better understand what is going on at the cellular level when a coral bleaches and dies.