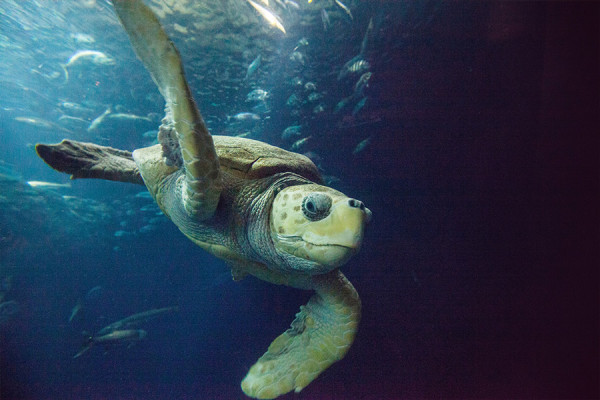 Living in South Florida, I always look forward to the summer months for the opportunity to catch a nighttime glance of a sea turtle coming to shore to lay its eggs. The loggerhead turtle, which can weigh up to 300 pounds, is one of the most prevalent sea turtles in Florida. However, we can’t forget that all seven species of sea turtles found around the world are considered either endangered or threatened. Sea turtles face a multitude of environmental stress including pollution, injuries from boats and disease.
Unfortunate encounters with boats account for one in four sea turtle deaths. The South Carolina Aquarium Sea Turtle Rescue Program helps to get those injured and sick sea turtles back on the road to recovery. The Aquarium Rescue program treats sick and injured sea turtles in partnership with the South Carolina Department of Natural Resources (SCDNR). ‘Boyles’, a male loggerhead turtle, was found by local fishermen who brought the sea turtle to the  Aquarium. Boyles was suffering from lockjaw and a fractured head, due to a boat strike. When Boyles first arrived at the aquarium, he was unable to even swim straight. His road to recovery was not easy, and he received daily therapy and cateract surgery in order to learn to swim properly and regain the ability to eat again. Today, over two years after he was brought to the aquarium, Boyles will be returned to the ocean, along with four other loggerheads. Once the five loggerheads are released, the aquarium will have treated and released over 187 sea turtles.