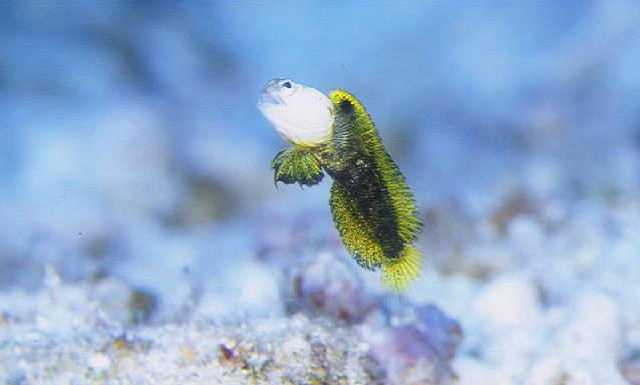 The Pygmy Jawfish in its mating display. From Okinawa, 15m. Credit: Satoshi Ueda

Indo-Pacific coral reefs are filled with a multitude of fishes thought to represent new species but which yet remain scientifically undescribed, seemingly stuck in taxonomic limbo as known unknowns. Think of the Pintail Fairy Wrasse and the Ruby Red Dragonet, both well-known in aquarium circles, but both lacking in legitimate nomenclature. Sadly, taxonomists are rare creatures these days, putting a clear constraint on the rate at which new discoveries can be studied. This is especially evident with regards to the jawfishes of the family Opistognathidae, a group which has at least ten unrecognized representatives in the West Pacific alone!

Jawfishes are remarkably diverse, with the most speciose genus, Opistognathus, having roughly 66 recognized taxa, not including all those awaiting formal classification. It would not be surprising if, when the world’s fauna is finally elucidated in full, that number were to inch closer to 100 or more. This would put the group on par with other hyperdiverse coral reef genera, such as Pseudanthias, Cirrhilabrus, Acanthurus. But, alas, as aquarium inhabitants, we know them for only a handful of regularly collected species: the Yellow-headed Jawfish of the Caribbean, the Blue-spotted Jawfish of Western Mexico, the Gold-specs Jawfish of the Coral Triangle. This taxonomic triumvirate represents just the tip of the opistognathid iceberg as far as interesting species for the home aquarist.

One of the more spectacular examples is an undescribed species known in field guides as the Pygmy Jawfish. Its range appears to stretch from Japan to the Coral Triangle and into the Fijian Plate, where it is recorded in sand-rubble habitats at depths ranging from 15-60m. This lilliputian is said to reach a maximum size of only 3.7cm (that’s just shy of an inch and a half), with sexually mature females known as small as 2.4cm! To put that in perspective, there are multiple species in the genus which top out at over 50cm.

There is considerable variation in the resting coloration of this species. Credit: active aqua & kazika1997

It’s easy to overlook the aesthetic beauty of this fish, as (like in many jawfishes) the colors and patterns are intended to aid in camouflage. This piscine is primarily painted in shades of cream and tan, a color scheme which renders it invisible against its psammic surroundings. The true splendour of the Pygmy Jawfish only becomes evident when the flames of sexual desire burn wildly within it. As the males become increasingly filled with lustful thoughts, ever more desirous for the soft, scaly embrace of a pale, diminutive female, their bodies darken dramatically, forming a sharp contrast with the still pale head. The fins and sides enrich further, as an aurulent resplendency turns the aroused male into a living jewel of the reef.

Now ensconced in the full regalia of its meretricious mating garb, the males must dance to win the affection of a nearby female. Emboldened by the hormones flooding through it, this licentious fellow protrudes from its burrow, hovering in the open water for all to see. Fins expanded, mouth agape, the sumptuous radiance of this auric display must be all but impossible to resist—an ephemeral moment of pure libidinousness. The Pygmy Jawfish has made known its salsipotency, the unrivaled ruler in this tiny, sandy kingdom.

Putting aside jawfish erotic fiction for a moment, it bears mention that this species has been collected for the aquarium trade on occasion. It is by no means a common offering, as it is almost certainly just an incidental catch, with specimens reported to originate from the Philippines. Needless to say, individuals seen in a retail setting are unlikely to show any of the chromatic ostentation so luridly alluded to. These are a fish for the connoisseur, someone willing to design an aquarium with it in mind. An ideal setup would include a few inches of sand and coarse rubble, with perhaps an occasional coral common to their habitat—Heteropsammia, Heliofungia, Radianthus malu. But do remember that these are not true coral reef fishes, and they are likely to be lost entirely if put into a stereotypical reef tank. 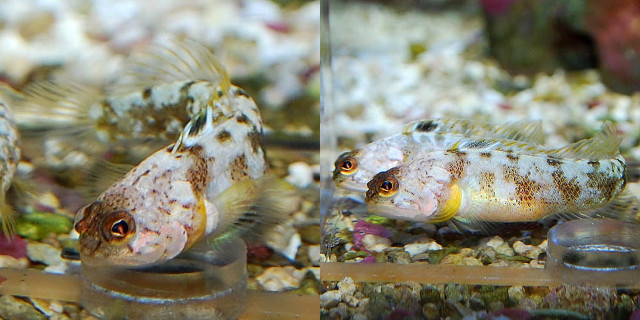 However, a small group placed into an adequately sized and ecologically appropriate aquarium would make for a truly spectacular display when the males engage in their flamboyant courtship rituals. The Pygmy Jawfish has immense potential in the aquarium hobby, especially for those with nano tanks, if only it were more readily available…