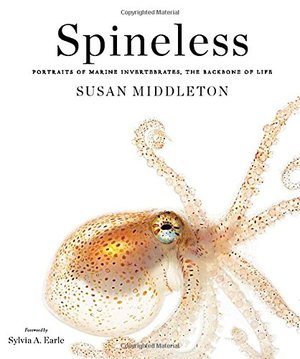 No, this isn’t an Idiot’s Guide to the Coward. In her new book, ‘Spineless: Portraits of Marine Invertebrates, The Backbone of Life’, San Francisco based photographer Susan Middleton captures more than 250 photographs of the fragile critters across the Pacific Ocean. I received this book early this morning much to my delight, and felt like my 5-year-old self on Christmas tearing through the packaging. The book itself is stunning. And huge (hey, size matters).  What struck me right away once I was able to tear myself away from the adorable Cephalopod-plastered cover art was the forward. The wonder that is Sylvia Earle shares her insight on invertebrates, their significance and, most importantly, the state of our oceans and their contained ecosystems.

While I will get into the rest of the book and my take on it in a future post, I’m going to actually focus on the first few pages here. It’s important to address Earle’s forward as it sends an invaluable message, one that’s often overlooked or swept under the carpet anemone, if you will. She applauds Susan Middleton for her considerable talents and how she’s employed them to bring awareness to the things that are being lost and, more importantly, why it even matters. She doesn’t bother to sugar coat the situation, either. Using bold, harsh numbers and statistics, it’s just laid right out there for us. Reading it, I feel a sting of guilt run down through my gut.

Once thought to be too big to fail, the ocean is now clearly being harmed, both by what people have been putting into it and by what we have been taking out, especially since the mid-twentieth century. Trouble for the ocean means trouble for all of life on earth, birds and humans very much included. And the pace of this trouble is picking up.

Earle points out that while the human population has more than doubled since the 1950’s, and people seem to be living longer, more fulfilled lives, our environment doesn’t go on unaffected, “In the sea, about half of the coral reefs, kelp forests, and sea-grass meadows have disappeared along with 90 percent of many kinds of fish, squid, and other ocean wildlife”. She makes note that our seas are still vastly undiscovered, with only 5% of what’s below the surface waters being explored at all and an estimated number of species remaining to be uncovered exceeding millions. But simply because we don’t know of them just yet, or even if we ever will, because we aren’t aware of what purpose they serve, if any, we can’t just simply shrug our shoulders at their loss. The oceans boast a delicate balance that holds 97% of the Earth’s biosphere and governs the way our world works. The most important thing we can remove from the ocean, she urges, is our meddlesome existence.

It’s an uncomfortable truth. Between heinous levels of pollution, over-fishing and illegal trade, humans have taken a devastating toll on marine ecosystems over the years. Even in the aquarium industry, we hardly have clean hands. While many of us strive to be responsible aquarists, there’s an unfortunate amount of people out there who look at it as simply a hobby with little regard for the incredible life under their care, which often times succumbs to an early, preventable fate. That being said, and as I’ve pointed out several times in the past, there are incredible actions people in the industry have been taking as far as conservation and rehabilitation in the form of protection zones, artificial reefs and captive breeding programs just to name a few. You can also do your part by being a responsible reef-keeper.

But not all is bleak. While the ocean faces the ever-changing factors from our planet – climate change, ocean acidification and the complete disappearance of entire species and ecosystems, we as humans do have the capacity to protect what’s still there. The first step is knowledge and awareness, and this book brings to life creatures most of us will never have the opportunity to see with our own eyes. So with every page turned, you’re brought face to face with each captivating, beautiful spineless creature. I left the book, staring at the very last page featuring a peaceful-looking octopus, with not only a feeling that I learned a thing or two about theses invertebrates, but a sense that I’ve gotten to know just a sliver of what swims/floats/crawls deeper in our seas. This is why I love real, physical books. You can pick up your own copy of “Spineless” here. 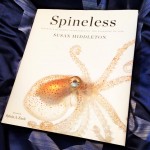 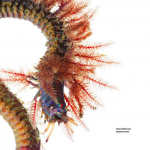 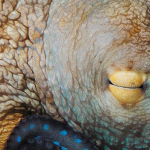 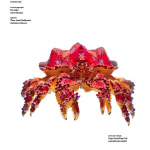