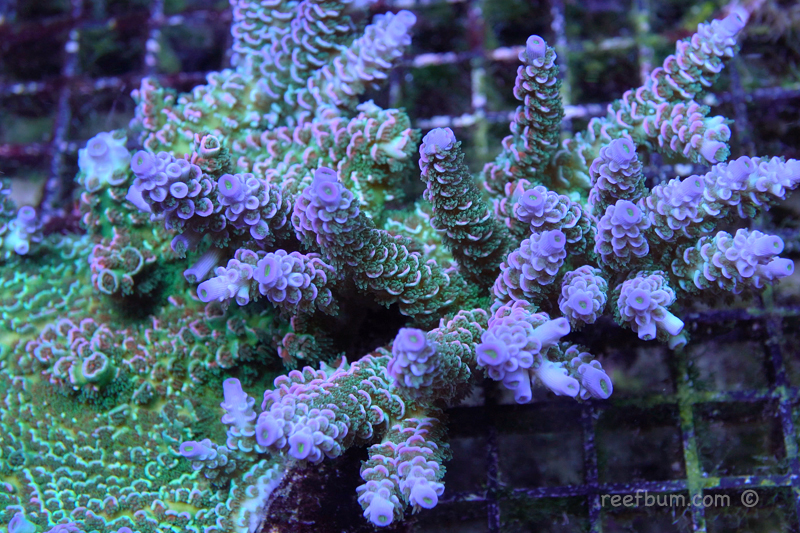 These days rainbow Acropora tenuis are very popular among SPS collectors. Many of these corals are shown under blue lights to highlight their florescent colors. Furthermore, some vendors will “photoshop” their pictures to create even more unrealistic images of the corals.

Add in a fancy name to stoke the marketing hype and the result is premium pricing for these SPS. But not all rainbow tenuis are unworthy of their hype. The Walt Disney and Jason Fox Homewrecker have been around for a while and are easy on the eyes under many types of lights. Prices have gone down as supply has grown.

I have both corals under 400W 20K Radium bulbs and the colors really do pop. Of course they pop a bit more in my other tank lit by LED’s when the spectrum is more blue during the morning and evening.

Another A. tenuis that deserves some attention is Jackson’s Rainbow Tenuis. This coral was named by Rich Columbo (a.k.a. jackson6745), a hobbyist in the New York metropolitan area who purchased a 1-1/2″ frag from another hobbyist back in 2013. It apparently originated from Australia.

Over time this blue-colored tenuis morphed into something special, developing striking red and pink corallites. Rich was able to bring out the best colors under 400W 20K Radium bulbs with PAR in the 500 to 600 range. Nitrates in his tank were approximately 15 ppm and phosphates were around .03.