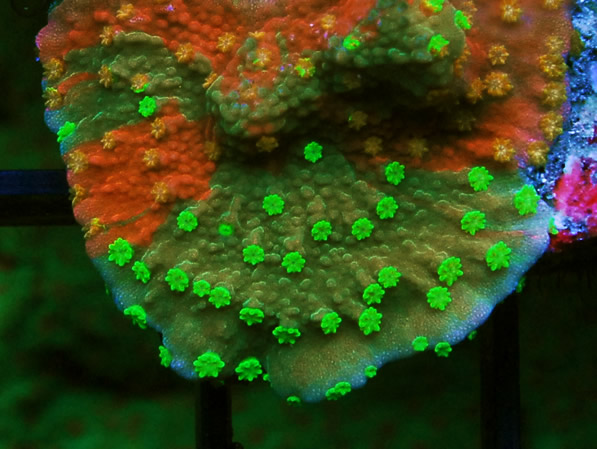 Hobbyists have have enjoyed performing numerous growth experiments on Montipora corals, both encrusting and plating alike. While most of the tinkering has resulted in the blending two or more different colored individuals into one coral, which usually reverts back to a single colored coral, every once in a while something truly special pops up on our radars. Such is the case for The Digital Fishroom, who recently shared their Starburst Grafted Monti. According to the article, this is a naturally occurring pigment graft that has been isolated and successfully reproduced over and over again the last couple of years. What we like so much about this particular graft isn’t just the fact that the base color is two different colors, but that the polyps exhibit some random color morphing as well. If you take a look at both images (one above, one below), you’ll notice that the polyps in the red/orange portion of the coral stay that orange-ish color for the most part, but randomly show neon green highlights. Similarly, the polyps on the green portion of the coral show those interruptions of orange. And this blending doesn’t just occur where the orange and green base colors meet, but randomly throughout the frags. There are currently only four WYSIWYG frags available for the initial release. They are priced at $200 per frag (includes shipping) and all frags have were made about a month ago…meaning they’re all healed up from the fragging process MORE: The Starburst Grafted Montipora is a Hot New Piece from The Digital Fishroom