Stolen From The Deep-Corals Being Depleted For Jewelry

Coral jewelry has been in high demand in Asia since the 8th century AD. The global market for corals used in jewelry is worth between 50 to 60 million dollars a year. The deep red variety, known as “oxblood” coral, now mostly purchased from Japan, is the most coveted, rarest and most expensive. Usually found around 350 feet below the surface, a top grade large oxblood coral in perfect condition, with no holes, marks or cracks can sell for about four times the price of pure gold. 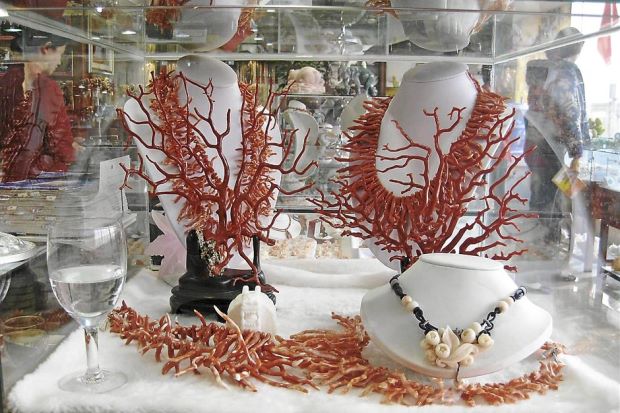 Stolen from the deep: Red corals are plundered from reefs to meet the growing taste for coral jewellery. – ELIZABETH WOOD

Recently the surge of Chinese wealth, and increased demand for this rare coral jewelry, has encouraged even more poaching in Japanese waters. Senior fisheries supervisor supervising officer Joni Shimajiri in Okinawa, said marine patrols had observed a huge increase in the number of fishing boats dredging up jewelry coral in the waters off Okinawa in recent years.   Poachers typically trawl for coral using drag nets that destroy the entire ecological system of the ocean floor around the coral reefs. “We’ve been seeing the poachers use nets as long as 300m, width of 20m to 30m … and rocks the size of soccer balls attached at the end to weigh the nets down,” Shimajiri said. Last year as many as 60 Chinese national fishing boats were sighted at one time. Before now, Chinese and Japanese governments had not come together to address the problem. Because these corals grow in waters over 30m below the surface- poachers use very long nets that dredge along the ocean floor- gravely damaging the ocean habitat. The Japanese government has not been able to aggressively prosecute poachers because although they are operating in waters within Japan’s exclusive economic zone they are often doing so in an area agreed under the Japanese-Chinese fisheries pact to be neutral territory for fishing purposes.  MORE