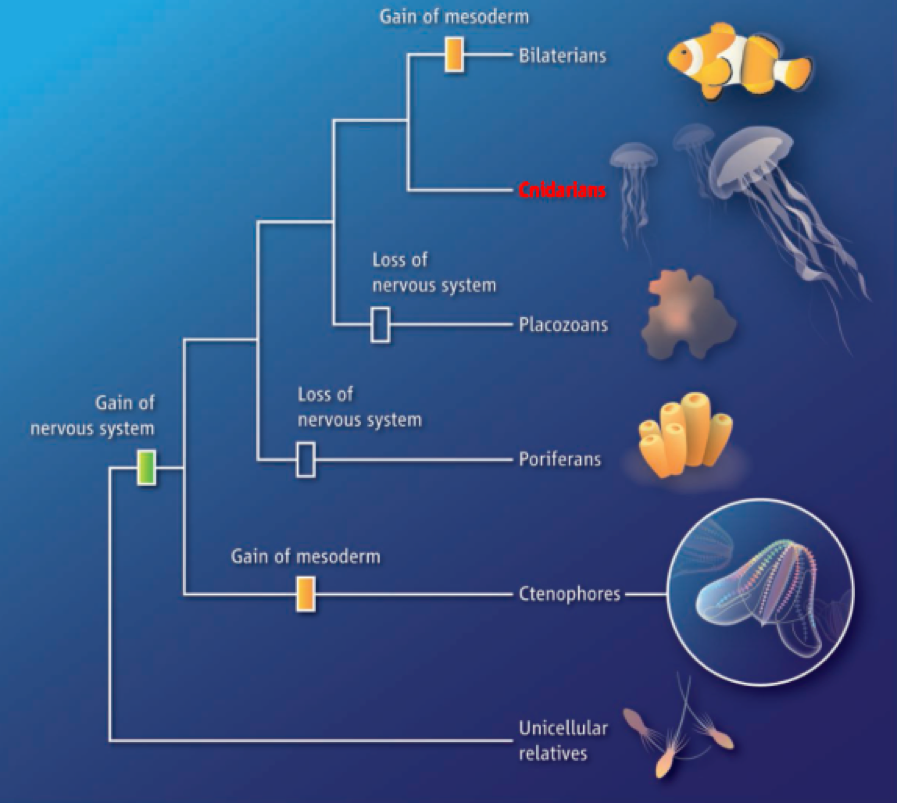 The evolutionary history of corals is a fascinating subject, recounting one of the oldest lineages of multicellular animal life. This story is full of mistaken identities, uncertain affinities, and exciting, new discoveries. It’s also a tale of extinctions and near-extinctions, and of adaptations and diversifications through the ever changing history of our planet. To begin our journey through coral evolution, let’s go all the way back to the origins of multicellular animals to gain a better perspective of the place of stony corals in the history of life on earth.

By studying the rate of mutations in the genetic code of extant (=living) groups, scientists can extrapolate backwards to determine when any two organisms last shared a common genetic code (i.e. their last common ancestor). This method, termed the “molecular clock”, gives a rough estimate ranging from 700-1000 million years ago for the origins of the first metazoan (=multicellular) animals. There is a long gap in the fossil record from this presumed molecular origin and the appearance of the first definitive fossil evidence; this is to be expected given the absurd odds of anything from this period becoming fossilized, surviving a billion years of geologic destruction, and ultimately being discovered and identified.

The recently described sponge, Eocyathispongia, known from 585 million year old rocks of the Ediacaran period, is the oldest known fossil that can be definitively identified as a metazoan. There are older fossils, but they are far more ambiguous in their interpretation. The next 40 million years offers a scant record of disputed fossils, many of which have been suggested as primitive jelly-like organisms. Finally, with the “Cambrian explosion” around 540 million years ago, we see the true blossoming of life on earth as we know it, with abundant fossil evidence of early corals.

With such a sparse fossil record, it should come as no surprise that the relationships amongst the earliest branches of metazoan life have been contentious. For centuries, the proposed phylogenies have been based solely on morphology, principally concerning the cellular organization and tissue histology of these groups. But in the last few years, under the scrutiny of new molecular methods, we have gained new insights into the earliest animal interrelationships. 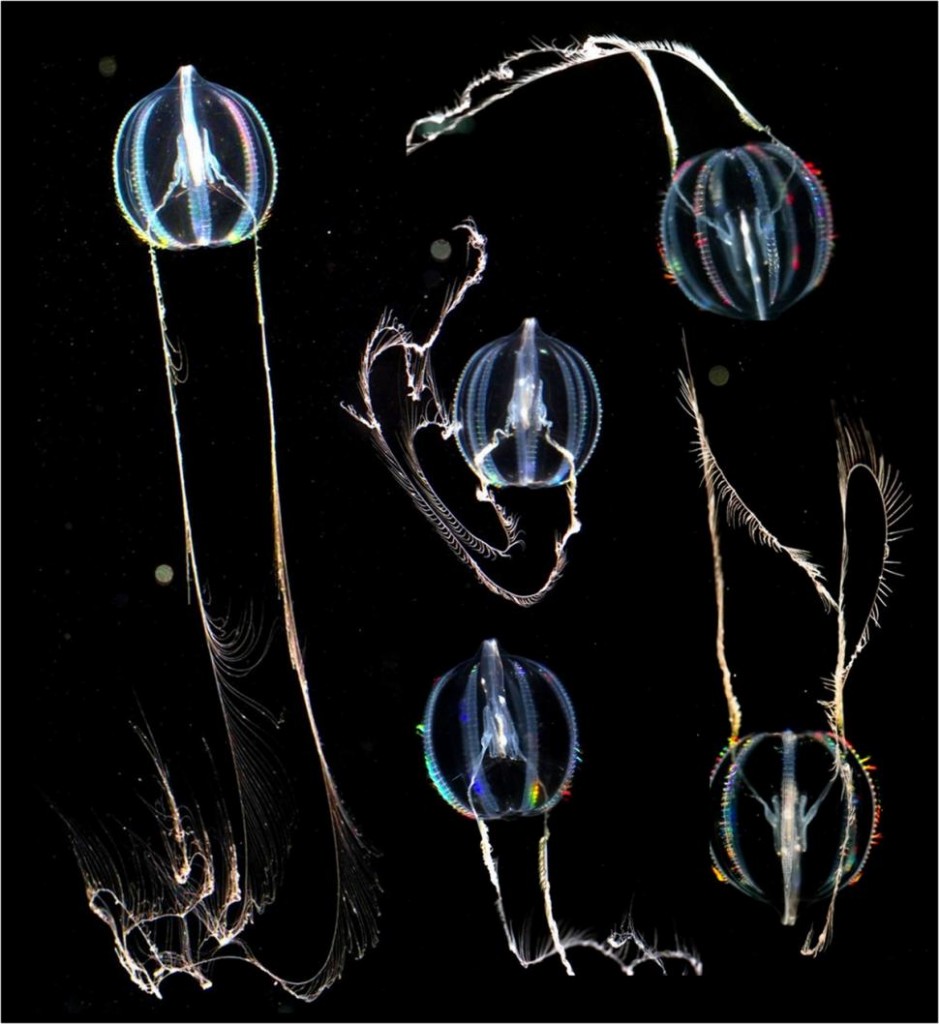 One of the most significant recent breakthroughs in zoology has been the revelation that the comb jellies, which appear to be morphologically “advanced”, are in fact the earliest diverging lineage of metazoan life. This is in contrast to the two alternate theories, which long held sway. One theory chose to combine the ctenophores with the true jellies based on a shared radial symmetry of the body organization and a jelly-like substance sandwiched between the inner and outer tissues. The alternate theory ignored these similarities, instead focusing on the congruence of the sperm of ctenophores and bilaterally-symmetrical animals (such as humans).

It has only been quite recently that scientists could move beyond sequencing just a handful of targeted genes and, instead, study entire genomes. This allows researchers to look for the presence and absence of particular genes, resulting in the discovery that comb jellies lack several major gene groups. Hox genes, which are vital for organizing development in nearly all other metazoan groups, was one gene group prominently missing—the only other group lacking them entirely are sponges. Without these genes, embryos fail to develop an anterior/posterior orientation, but comb jellies seem unconcerned with this. It was also discovered that the nervous system is fundamentally different from all other animals, lacking in many features, such as neurotransmitters like dopamine, serotonin, histamine, and adrenaline. So the next time you see these bizarre creatures at a public aquarium, gracefully propelling themselves through the water, remember that these are but a distant relation to the pulsating jellies (and their coral relatives) which we are familiar with. 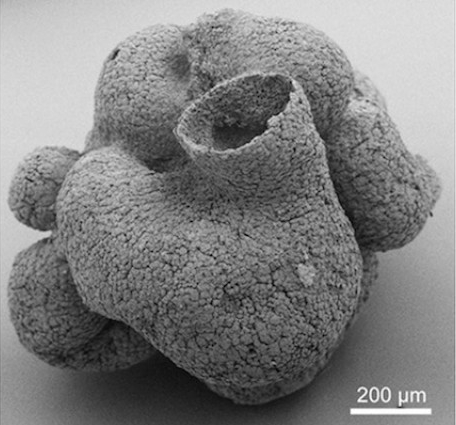 Sponges have long been considered the ur-animal. Their bodies are generally asymmetrical; their tissues are relatively minimal and unspecialized; their most characteristic feature (flagellated cells called choanocytes) are found in the protozoans most closely related to metazoans. There are clear reasons why this group was long considered to be the most “primitive”.

But genetic study has brought to light some startling revelations about the evolutionary history of these inscrutable creatures. Genes have been found present that code for structures not normally associated with sponges, such as neural signaling and tight cell junctions. This indicates that the apparently simple morphology of this group does not accurately reflect the genetic toolkit inherited from the earliest sponge, and that their current morphology is perhaps a result of reductions associated with the successful adaptation to their trophic niche. This reduction of form is evidenced in the fossil record, where some extinct groups appear to have the type of radial symmetry associated with jellies.

https://www.youtube.com/watch?v=9IwSxC67AXU
One of the recurring enigmas in zoology has been the evolutionary relationship of this small and obscure group. Unless you’re an invertebrate aficionado, you’ve likely never heard of Trichoplax. There is but a single species currently recognized, though there is evidence that upwards of 200 species may actually exist! Placozoans in the wild are difficult to study and thus poorly known; in fact, the group was only discovered by chance in the late 19th century, when Trichoplax was unknowingly introduced into an aquarium. These creatures are now known from marine waters around the world, preferring calm habitats with rocky substrates, including coral reefs.

Morphologically speaking, this is an odd beast, as it very much resembles an amoeba writ large. Its multicellular body lacks any true epithelial layers (a character it shares with sponges), and there is no symmetry to the body. There is no left/right or front/back (though there is a dorsal/ventral polarity), but, importantly, it does possess at least one of the Hox genes that organizes these symmetries, indicating that the ancestors of Trichoplax were not always so “primitive”. Genetic data has begun to reach a tentative agreement as to the placement of placozoans amongst the metazoans. They apparently diverged just before the appearance of the true jellies and the bilaterians, with the three forming a supraphyletic group now called the ParaHoxozoa (after the group of genes shared by its members).

Tune in tomorrow for Part 2!