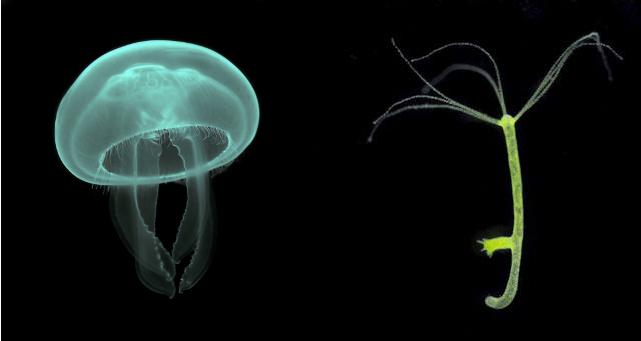 True Jellies & Corals: Phylum Cnidaria
And, finally, we have gotten to the group we are interested in. Within this large and diverse phylum we have many familiar forms: soft corals, stony corals, anemones, box jellies, the “true” jellies, Hydra, hydroids, sea pens, sea whips, sea pansies. Making sense of all this diversity can be a challenge, and before we delve into it, we need to better understand what defines a cnidarian.

The name is derived from the Greek cnidos, meaning “stinging nettle”—an apt name for a group associated with its often painful stings. The manner with which it stings is unique in the animal kingdom. Within certain modified neural cells are specialized organelles (nematocysts) under osmotic pressure, capable of deploying a venomous barb when contacted. This feature alone is enough to identify any cnidarian, but also worth mentioning is their radial symmetry and gelatinous matrix (in place of a legitimate middle tissue layer). These last two features are shared with the comb jellies, but this is perhaps best understood as the retention of an ancestral jelly-like condition. To reiterate, these two groups of “jellies” are only distantly related.

The radial symmetry of jellies makes them seem particularly foreign to us bilaterally biased creatures, but research indicates that the same signaling pathways that give us our anterior/posterior axis are potentially responsible for the oral/aboral axis of cnidarians. Furthermore, the tetraradial symmetry of this phylum is only seen in the medusozoans to be discussed next; anthozoans (wherein resides all the various coral groups) are actually bilaterally symmetrical like us. So it seems quite plausible that cnidarians could have originally possessed a poorly-developed form of bilateral symmetry. While jellies may seem far removed from a species as morphologically complex as ourselves, it’s important to realize that much of the genetic architecture that enables that complexity can be found in a nascent stage here with the jellies. Much of our basic physiology—from how our nerves communicate to how our cells adhere together—can be seen as cnidarian in nature.

This group includes all of the pulsating jellies (scyphozoans), the enormously diverse hydrozoans, as well as the box jellies (cubozoans), the unusual stalked jellies (staurozoans), and even some bizarre internal parasites (polypodiozoans and myxozoans)! With the exception of the parasitic forms, all these groups possess a dual stage life cycle, alternating between an asexual polyp and a sexual medusa (i.e. “jellyfish”). There are certainly exceptions—the well-known freshwater Hydra never has a medusa, and there are marine species which never have a polyp stage, but these can be seen as secondary losses from ancestors that did possess both life stages. Also important is the radial symmetry of the group and the lack of internal mesenteries—longitudinal sheets that partition the body cavity. These characters all differ in the remaining cnidarian group, the Anthozoaria, with which medusazoans last shared a common ancestor some 700 million years ago.

The Anthozoa (Greek: “flower animal”) have befuddled generations of naturalists, as they possess an interesting mix of plant-like and animal-like characteristics. This gave rise to their other historical name, the Zoophytes (Greek: “plant animal”). During my tenure as a retail aquarist I overheard a great many people who were sure these creatures were plants—a sad appraisal, if ever there was one, of the natural history being taught in our school system. Alas!

Corals, and their many allied groups, never form the medusa seen in the other jellies. Instead, sexual reproduction takes place in the polyp stage, as it does in Hydra. This is presumably the ancestral condition for the phylum. While neither group is older per se, the anthozoans can generally be thought of as the more “primitive” of the two.

Also of note is the pattern of symmetry in this group. While the body is mostly arranged radially, there are in fact two distinct sides which correlate to the opposing ends of the mouth. A ciliated groove used for expelling fluid from the gastric cavity is typically found at one end (or both ends), and often associated with this groove is an internal mesentery, called the directive mesentery. Mesenteries are important internal structures that aquarists are generally unfamiliar with, but which are critical in higher level coral classification. These structure are typically equipped with muscles for withdrawing the polyp; they are the sites of reproductive organs; and, in groups forming skeletons, they are the sites around which the septa form.

Two major groups of anthozoans exist: those with eightfold symmetry and those with sixfold. Put another way, octocorals always have eight tentacles per polyp, while hexacorals will have six or twelve or twenty-four, etc. Another easily observed difference is the short lateral branches (“pinnae”) on the tentacles of octocorals, which give them a feather-like appearance.

Within the octocorals are many groups familiar to aquarists, the largest of which are the soft corals of the Order Alcyonacea. Placed within this group are the traditional soft corals (e.g. Sinularia, Lobophytum), which gain structural support from internal sclerites composed of aragonite. These typically fail to add substantially to reef growth, though an exception to this can be seen in the relatively dense sclerotic accumulations at the base of Sinularia. Many aquarists fail to appreciate the colonial nature of these corals, confusing the individual polyps for tentacles. This is an understandable mistake, but careful study reveals the stalked bases of these corals to be a shared structure of the colony, called the “coenenchyme”. Only a single species with a solitary lifestyle is definitively known, the rarely-encountered and deep-dwelling Taiaroa, currently placed in its own order—Protoalcyonaria.

The common name “gorgonian” refers to a heterogeneous group that includes a variety of branching species that have often been treated as their own taxonomic order, but morphological and molecular study has decisively shown this to be an artificial assemblage that grades into more traditional soft corals. The main rationale for separating them—the presence of an internal skeleton, typically formed of gorgonin—is now known to exist along a morphological continuum. More “primitive” species (like the common aquarium species Diodogorgia) have an internal core formed of sclerites, giving them a brittleness not seen in more advanced groups. One of the closest relatives to these “brittle gorgonians” is Briareum, the Green Star Polyps.

Also nestled within the Alcyonacea is the Suborder Stolonifera, whose polyps are united by thin interconnections termed “stolons”. Some, like the pipe organ coral (Tubipora), have their polyps ensheathed within thin external skeletons, whilst others, like the clove polyps (Clavularia) and daisy polyps (Knopia), are soft and uncalcified. Several other small, brown species occasionally hitchhike into aquariums. One of these unremarkable species which I sent off for identification has turned out be both an undescribed genus and family (McFadden, pers. comm.), so there is clearly much to be discovered in this group.

The blue coral Heliopora, placed in its own order, is well-known from the fossil record and unique amongst the extant octocorals in possessing a mineralized skeleton composed of aragonite. There is possibly an undescribed relative, occasionally found amongst Clavularia polyps in aquariums, that resembles a “stony stoloniferan” in general appearance. Preliminary genetic analysis (Jake Adams, pers. comm.) has aligned this unknown taxa nearest to Heliopora—an exciting find worth keeping an eye out for. The final octocoral group, the Order Pennatulacea, includes unusual colonial forms known variably as Sea Pens or Sea Daisies. Unique to this group is a single enlarged polyp which acts as a buried support for the many specialized polyps above the surface. Neither of these Orders are particularly common in aquariums.

The remaining coral diversity is placed here, and it includes the vast majority of groups involved in the formation of coral reefs, both currently and from the fossil record. The sixfold symmetry to the body is universal, though most groups have far more than six tentacles (e.g. 12, 24, 48). As evidence of their close relationship with the octocorals, the larvae of the Hexacorallia initially develop with eight mesenteries, until eventually this is reduced to six during development. The lack of tentacular pinnae is usually a far more easily observable character to look for when diagnosing this group. 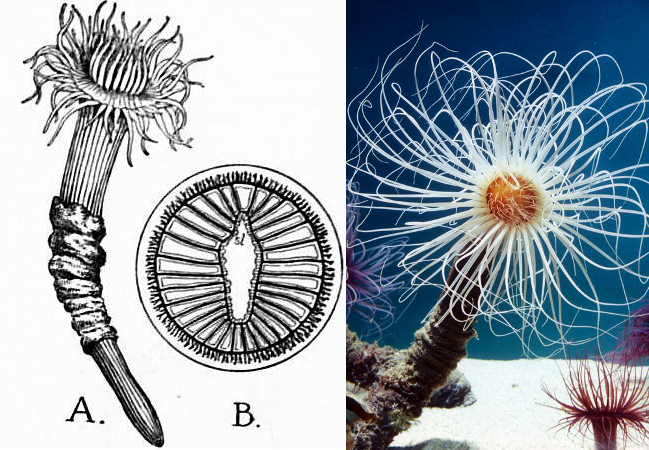 Don’t let the name fool you, these are only distant relatives of the sea anemones. In fact, this group occupies a distant branch of anthozoan life sister to all other hexacorals. There are several key differences between the two anemone groups. First and foremost is the tube that gives them their name. This baglike structure is an agglutinated mixture of sediment, mucus, and specialized, nematocyst-like organelles called “ptychocysts”, which are discharged to hold it all together.

The muscular pedal disc which sea anemones use to attach to solid substrates is missing in this group, though it is likewise missing in several burrowing sea anemones. The tentacles of tube anemones are divided into two distinctive categories: a small ring of labial tentacles surrounding the mouth and the larger marginal tentacles which fringe the edges of the oral disk. The mesenteries are numerous and all extend to the central gastric cavity, and their mesenterial musculature is significantly reduced, though this doesn’t seem to hinder their ability to quickly retract into their tube. The mouth has only a single ciliated groove (“siphonoglyph), whereas in actinarians there are two. In sum, despite some superficial similarities, these are quite different beasties. 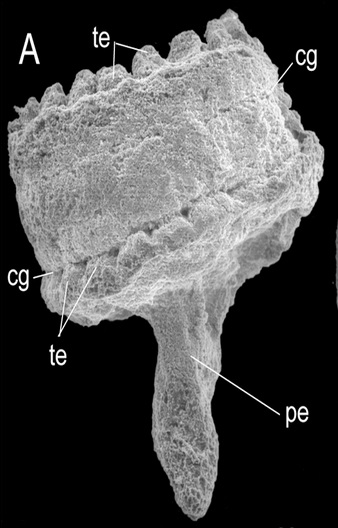 The roughly one-thousand known species of sea anemones are an important group for understanding the evolution of stony corals, as their morphologies are remarkably similar. The group has a rather poor fossil record; not surprising for a gelatinous animal. But the recent discovery of the remarkable fossil Eolympia—just a single millimeter in length and known from Lower Cambrian rocks some 450 million years old—gives us a glimpse into the ancient evolutionary history of this group.

Many aquarists make the mistake of confusing stony corals and anemones, and the differences are indeed visually subtle and not particularly intuitive. Most obvious is of course the lack of a mineralized skeleton, but there is every reason to believe that the earliest stony corals were in fact not stony, so this characteristic is only relevant to extant taxa. Another key difference is seen in the pedal disc of anemones, which bears muscles that enable the organisms to slowly glide about the substrate. These specialized muscles are lacking in stony corals, which renders them fairly immobile. Even free-living corals can only move about by inflating/deflating their tissue. 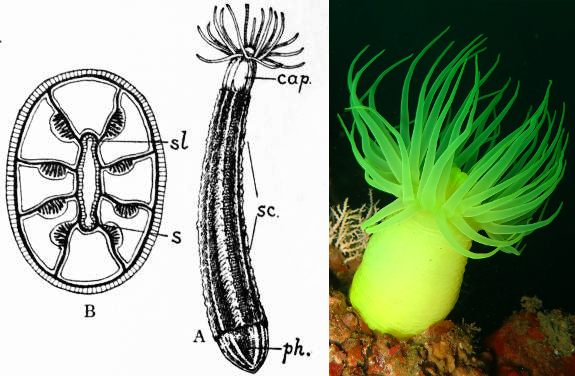 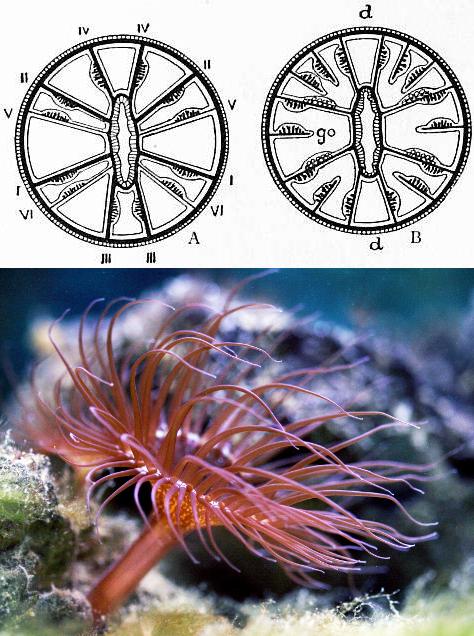 Only two members of the Anenthemonae show up in aquariums. Halcurias is a neon green anemone collected from Japanese waters. Edwardsiella is a diminutive brown species (easily confused with “Aiptasia”) that occasionally hitchhikes into aquariums, living buried in sand or rock up to its tentacles. The second, and far more diverse group, is the Enthemonae, which includes the vast majority of aquarium species. 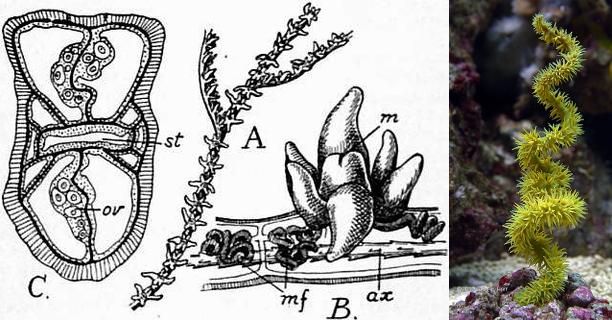 This small group (230 spp.) gets its name from the black, spiny, internal skeleton, composed of chitin, iodine, and bromine. The scientific name, Antipatharia (Greek: “against disease”), derives from the purported usefulness of the skeleton in treating illness. The relationship of the antipatharians to other corals have long been uncertain, but it now has been shown to form the sister group to the button polyps of the Zoantharia and the unusual species Relictanthus daphnaea. Amongst the hexacorals, the antipatharians have developed one of the most derived morphologies, and are the only order whose members are exclusively colonial. They are likewise unique in being the only group of hexacorals to have members possessing precisely six septa, but note that there are exceptions within the order.

Few species are found within SCUBA depths, and the only species seen with any regularity in aquariums is a yellow, corkscrewing Cirrhipathes that is typically sold on a maricultured base. The other major lineage of antipatharians are those species with feather-like, branched colonies, typified by Antipathes. Both groups are easy to misidentify as “gorgonians”, but the spiny, rigid skeleton, as well as the number of tentacles, will help to easily separate them.

Tune in for Part 3 tomorrow!