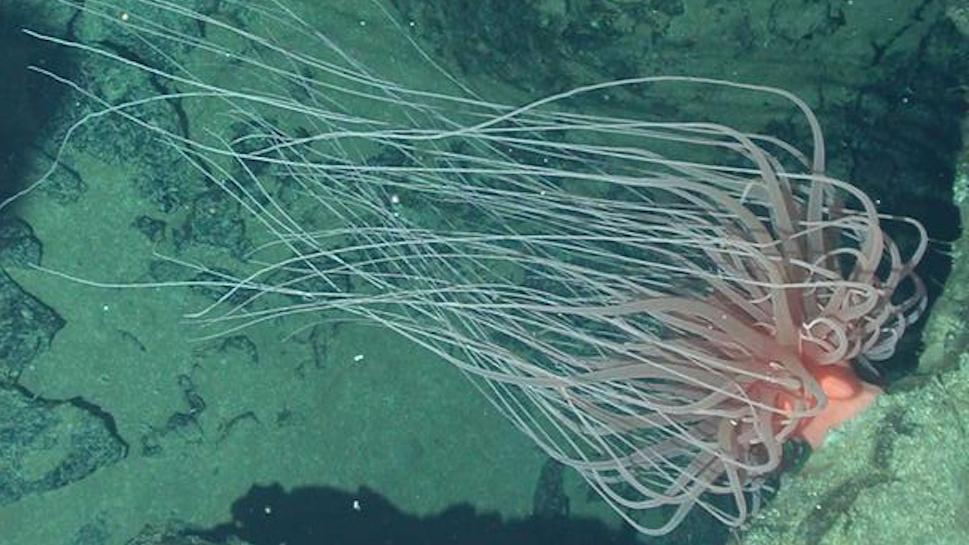 A recent study of sea anemone genetics revealed a surprising finding—a species formerly included amongst the “swimming anemones” was in fact a completely different order of hexacoral. This large colorful species is known only from hydrothermal vents in the ocean depths. Calling this species “large” is a bit of an understatement, as the body can reach up to a meter across, with tentacles up to two meters long. This is in fact the largest polyp known to science! Its former placement amongst the “swimming anemones” is indicative of a high degree of morphological convergence, particularly amongst the nematocysts. But the incongruities in body size, habitat and genetics strongly indicate this species occupies its own unique branch of the hexacoral tree of life. More work remains before the issue is settled and a complete classification is in place. 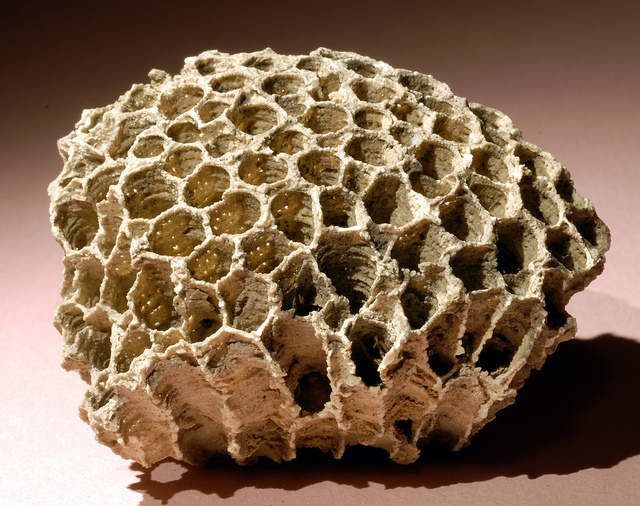 Sister to the bizarre Relicanthus is a familiar group of small, colonial polyps known variously as button polyps or zoas. Several important characters help define this group: 1) the incorporation of sand/sediment into the tissue to add support (note that this is absent from the common aquarium genus Zoanthus) 2) two rows of tentacles encircling the oral disc 3) a unique arrangement of dimorphic mesentery pairs. The unusual morphology and growth of the mesenteries has been suggested as a possible derivation from the serial septal growth seen in the extinct Rugosa.

While the vast majority of species are colonial, remaining interconnected either with stolons or embedded within a common mat, there is one group whose species remain solitary throughout their lives. The three species of Sphenopus are found in sandy areas throughout the warm waters of the Indo-Pacific. These large polyps (up to 3.5 cm across) are azooxanthellate and presumably micropredaceous suspension feeders. Molecular study indicates this bizarre group is actually derived from within the colonial genus Palythoa. Sadly, I have yet to hear of these strange polyps being exported for aquarists. While Sphenopus may not be as chromatically brilliant as your typical zoa, this is a fascinating organism—one which deserves a place in the aquarium hobby!

One of the most important hermatypic organisms of the Palaeozoic were the tabulate corals. These early reef builders were exclusively colonial, with small polyps ranging from 1-3mm in diameter. Most colonies, as in the common genus Favosites, were densely packed together, giving the corals a “honeycomb” shape. These encrusting or hemispherical colonies could reach several meters across, and would have likely resembled large colonies of Porites—though whether they were zooxanthellate is anybody’s guess. Unlike extant corals, the tabulates didn’t attach themselves directly to substrate, so their ability to form stable reefs relied on other calcifying organisms (often sponges) to help cement them in place.

There also existed more loosely branched colonies, with the earliest possible example being Ramitubus, thought to date from the roughly 585 million year old rocks of Southern China. Whether or not this is a legitimate tabulate coral is controversial, as this specimen greatly increases the fossil record of the group; however, it would seem to be in line with the dates suggested by molecular clock studies for other members of the phylum.

There were many distinctive features shared amongst this group, which results in them having only a casual resemblance to the extant stony corals. Foremost was the presence of partitions across the width of the corallites. Called “tabulae”, these structures give the group its name. The tabulae acted as the floor of the calice, and as the polyp grew it would retract its base vertically and secrete a new tabula.

Unlike other groups of mineralized corals, the septa were either absent or greatly reduced in size, and never numbered more than 12. They normally possessed a series of openings through the skeleton, called “mural pores”, which allowed the colony’s polyps to maintain physiological interconnections, analogous to what is seen in the pipe organ corals. These were truly colonial organisms, and not merely closely packed individuals. And, lastly, the skeleton was composed of calcite—a different form of calcium carbonate than the aragonite of today’s stony corals.

The group has an extensive fossil record, showing particular abundance during the Ordovician, which subsequently diminished in number through to the Permian, after which it disappears from the fossil record entirely. This extinction event truly reorganized the faunal diversity of the oceans, and, had it not occurred, we might be fragging tabulate corals for our reef tanks today. 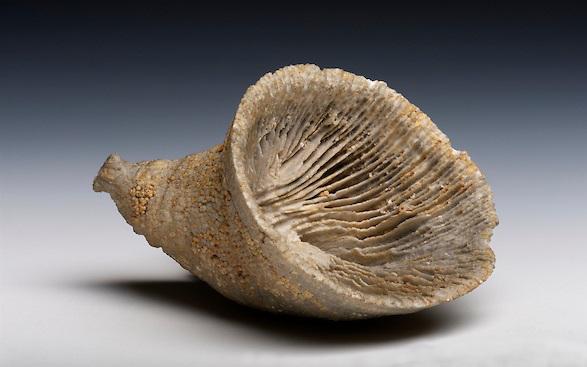 This distinctive group of corals was a dominant part of Paleozoic marine ecosystems, first appearing around 460 million years ago, and finally disappearing during the Permian/Triassic extinction event. The name Rugosa is in reference to the rough, wrinkled appearance of the skeleton’s outer layer—the epitheca. This structure was secreted each day in a thin ring around the upper rim of the polyp, with the result being a microscopic calendar analogous to tree rings. By counting this “coral clock”, researchers have surmised that the earth formerly had 400 days per year and 13 lunar months during the Palaeozoic.

Rugosan diversity peaked during the “age of fishes” of the Middle Devonian, when some 235 genera were known. Their 230 million year history on this planet resulted in a variety of forms. Most were small, solitary species, which grew as horn-shaped colonies. These forms often rested on their sides, partly buried. 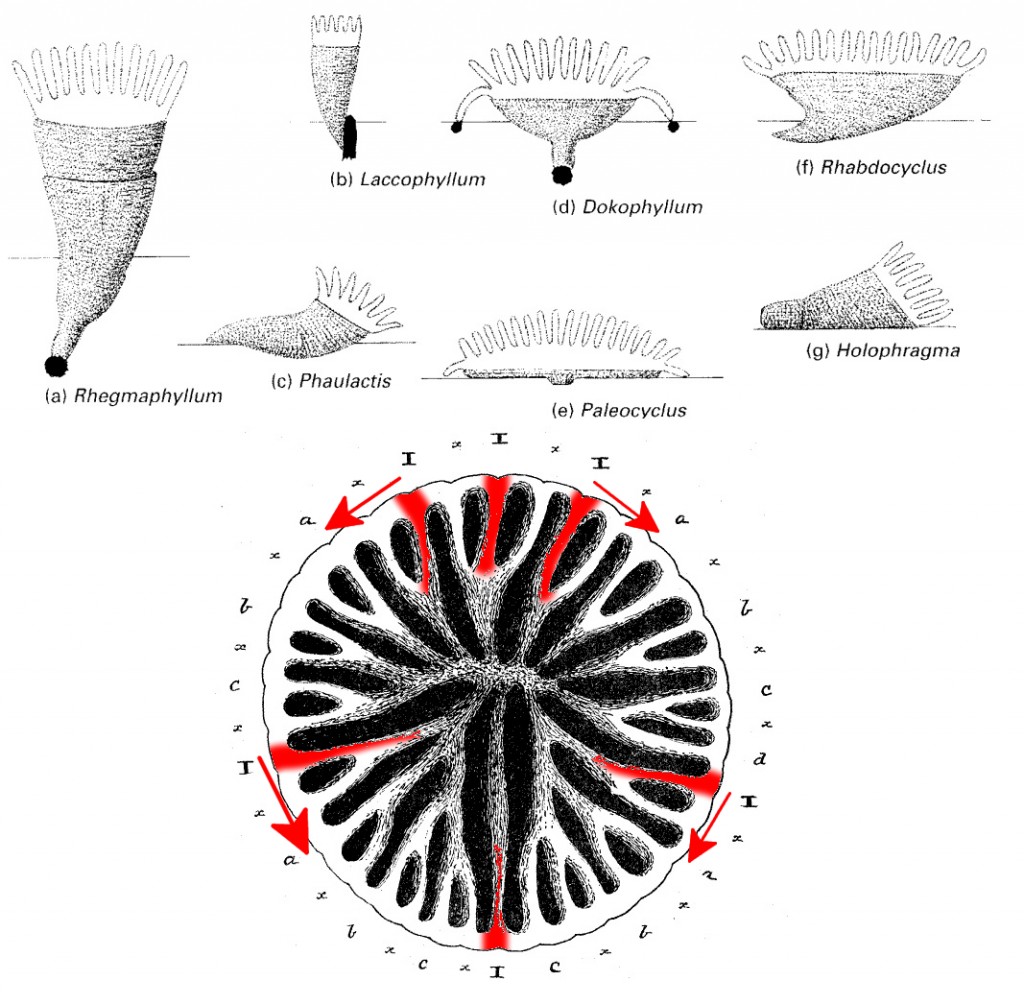 Colonial species were common as well, with large monospecific stands reaching many meters across. These too were unattached to solid substrate, but their large size appears to have provided enough stability to create small patch reefs. In general, colonial rugosans were of limited importance in creating reef structures, though they can often be found embedded within reefs created by other taxa. It’s unknown if they possessed zooxanthellae, though their loose colony structure argues against it. In all likelihood, these were azooxanthellates that led a lifestyle similar to some of the free-living Balanophyllia of today.

There are a few useful characters that separate this group from the other major stony coral groups: Scleractinia and Tabulata. Most importantly, the septa are arranged in a unique array, with polyp growth accomplished by the addition of new septa placed serially amidst the four non-directive septa, giving the corallite four zones of septal growth and its alternate name—the Tetracorallia. Each successive septum grew in place of an older septum, pushing it toward the center of the polyp. This is most obvious during the earliest growth stages; the mature polyps are strikingly similar to extant stony corals, which differ in their evenly-spaced septal cycles, with new septal growth occurs between existing septa. The serial development of rugosan septa was a limiting factor in how colonies could form, as the polyp growth could only proceed as an ever enlarging circle, whereas, in stony corals, the cyclic nature of the septal insertions allows for asymmetric polyp shapes, and thus far more integration amongst the polyps. To wit, species of rugosan corals which grew as colonies were merely a collection of individual organisms attached by their shared skeletons, much like as in Caulastraea and branching Euphyllia. There were never any rugosan brain corals; their growth couldn’t allow for it.

Like the contemporaneous Tabulata, horn corals were divided vertically, either by tabulae or by blister-like structures called dissepiments. They likewise shared a calcitic (rather than aragonitic) skeleton, but the differences in septal development and colony formation easily separate these two fossil groups.

Given some of the gross similarities between horn corals and stony corals, it has often been suggested that the latter might have evolved from the former. The Early Triassic gap in the fossil record could be indicative of a period when surviving rugosan corals lost their skeletons and changed their septal pattern. But recent finds of far older Scleractinia-like corals seem to strongly refute this, and, furthermore, rugosan skeletons are far more heavily constructed than the Triassic scleractinians which followed them. So it now seems that the horn corals were indeed an evolutionary novelty that died out after the Permian, and that scleractinians evolved from an anemone-like creature many millions of years before they began appearing in the fossil record.

Four further groups, each quite limited in diversity, are known from the Palaeozoic. In general, their relationships to the major corals of this era are poorly understood, as they often show intriguing mixes of morphological characters.

The Tabulaconida is comprised of three genera whose members bear some resemblance to the tabulates; however, the mural pores characteristic of that group are absent. Colonies were either cerioid or phaceloid. All members are from the Cambrian, predating the peak tabulate diversity of the Ordovician.

The Cothonioniida, with just the single genus Cothonion, is an abundant fossil from the Middle Cambrian. The corallites are 10mm in diameter, weakly septate, and lack tabulae. They form small colines of cone-shaped polyps with a snail-like operculum. This latter characteristic is known for some rugosans, suggesting a possible affinity, but most taxonomists continue to treat them separately.

The Heterocorallia is a small group from the Carboniferous with elongate polyps bearing septa and tabulae. They have a distinctive septal arrangement of four “protosepta” which grow by branching into y-shaped septa. It has been suggested they may have been epiplanktonic, living attached to drifting vegetation in the way extant goose barnacles do.

The Helioletida were another small, obscure Devonian offshoot. Colonies had expansive coenosteum between the polyps and a skeleton formed of calcite, as in the above groups. They are suspected to be closely related, and possibly derived from the tabulate corals.

Tune in tomorrow for Part 4!