Let’s admit it, we all love Orcas aka Killer Whales.  Well then we should commend a group of brave volunteers who did an amazing job working to save a stranded Orca on July 22nd on the rocks near Hartley Bay, BC Canada.  The whale-loving citizens spent over 6 hours working to keep the killer whale cool and wet with the hopes of saving it from an uncertain fate. 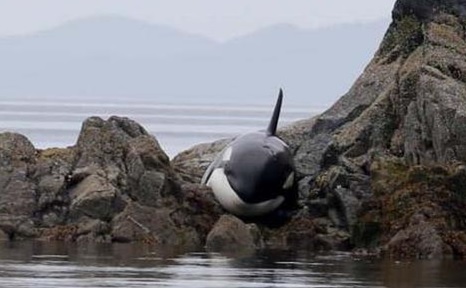 Early on Wednesday, a boater heard some faint squeaking sounds coming from some rocks. After a closer look, the boater spotted a truly rare sight, an orca that had become stuck one a rocky outcropping! The whale had apparently got stuck between the rocks when the tide went out and was wedged high and dry. The concerned boater quickly summoned volunteers from the community and within an hour people from the World Wildlife Foundation, and The Cetacean Lab approached the troubled animal trying to comfort it  with wet blankets and towels in an attempt to keep it properly hydrated and moist from the warm summer air.

“She cried often, which tore at our hearts, so we decided the best thing to do would be to keep her cool, that meant to put water on her body and we used blankets and sheets,” said Hermann Meuter, a co-founder of Cetacean Lab.  Thankfully after over 6 hours on dry land, the tide finally rose enough that the Orca as able to swim free apparently unharmed. More