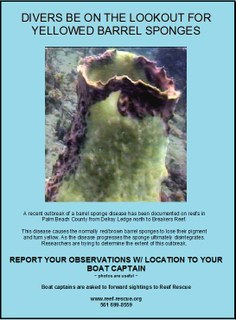 
The disease was first noted during the month of April of this year and has steadily progressed along the Florida coast from Palm Beach all the way to the lower Keys. The disease is specifically found on red and brown barrel sponges and symptoms start as yellowing of the sponge followed by complete disintegration after the disease has completely taken over.

The two big questions are which way is the disease is progressing and what is causing it. Is it progressing north with the prevailing currents or is it progressing south?  At this point scientists are tracking the outbreak and working toward a diagnosis.

Their first step is determining if there are pollutants in the water that would cause the symptoms. One of the first tests that need performed is one for polycyclic aromatic hydrocarbons (PAH). PAHs are commonly found in crude oil pollution, which could indicate polluted water possibly coming from the Gulf of Mexico.  Sponges could end up exhibiting problems early as they are filter feeders.

“We are trying to get a handle on the extent of how widespread the disease outbreak is right now,” says Rob Ruzicka, program manager at the Fish and Wildlife Research Institute. “As far as we can tell, this is the largest event we’ve seen so far, at least in Florida.” … “It’s totally possible that whatever is causing the disease here could spread to the rest of the Caribbean in a matter of months or a year,” Ruzicka says. “We might just be witnessing the very early stages of something larger… We need to find out if it’s a widespread pandemic and, if so, how much of the sponge population it is affecting.”

ReefRescue uploaded a video showing the various progressions of the disease from a series of diving trips: