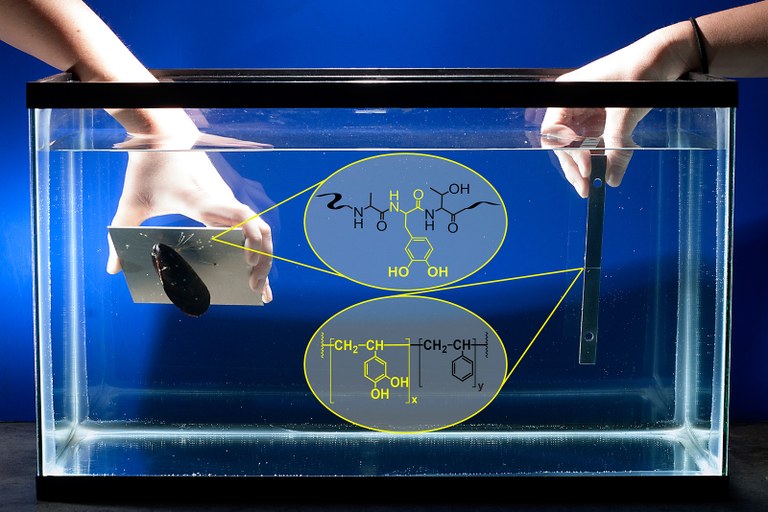 An adhesive that works under water and is modeled after those created by shellfish for sticking to surfaces has been shown to be stronger than many commercial glues. At left, a live mussel uses its natural adhesive when sticking to an aluminum sheet. At right, two pieces of aluminum are bonded together with the new biomimetic polymer modeled after the animal’s adhesive. Also, chemical structures of the mussel protein and the synthetic polymer are shown. (Purdue University photo/Jonathan Wilker) – via Purdue University.

Anyone who has ever tried to dislodge a Tridacna clam that has attached itself to live rock knows how incredibly strong that adhesion is.  It’s virtually impossible to tear the clam away from the rocks without ripping the clam’s foot (often mortally harming the clam).  Even then, the byssus threads remain firmly attached to the rock.  When reefkeepers must relocate clams, the only viable choices are to carefully lift and cut the threads (avoiding injury to the clam’s foot) or chisel away the rock around the attachment point.

Researchers have now successfully recreated this adhesive by studying the DOPA amino acids produced by bivalves.  The glue, of course, bonds and cures underwater and is the strongest underwater adhesive currently known to man.  In fact, the glue scientists have engineered is much stronger than the natural glues produced by the mussels that inspired their research.

Synthesizing material based on natural materials is called biomimetics.  In biomimetics, you almost never recreate anything as good as the original, so imagine the researchers surprise when they discovered their synthesized Poly(catechol-styrene) tested about 17 times stronger than their natural counterpart.  The authors of the paper believe bivalves may purposefully limit the strength of their protein bonds to only sufficiently anchor themselves while still being able to break free if needed.  In its “pure” synthesized form, Poly(catechol-styrene) is ridiculously strong.

And according to the Purdue news release, “New findings showed that the bio-based glue performed better than 10 commercial adhesives when used to bond polished aluminum. When compared with the five strongest commercial glues included in the study, the new adhesive performed better when bonding wood, Teflon and polished aluminum. It was the only adhesive of those tested that worked with wood and far out-performed the other adhesives when used to join Teflon.”  The glue has an incredible range of underwater application, including bonding objects to wood and Teflon.

More research is still required to bring this technology to practical application, but one-day, reefkeepers may be using adhesive inspired by bivalves to glue rocks, mount frags, and repair breaks underwater.

The paper is published in the journal Applied Materials and Interfaces.