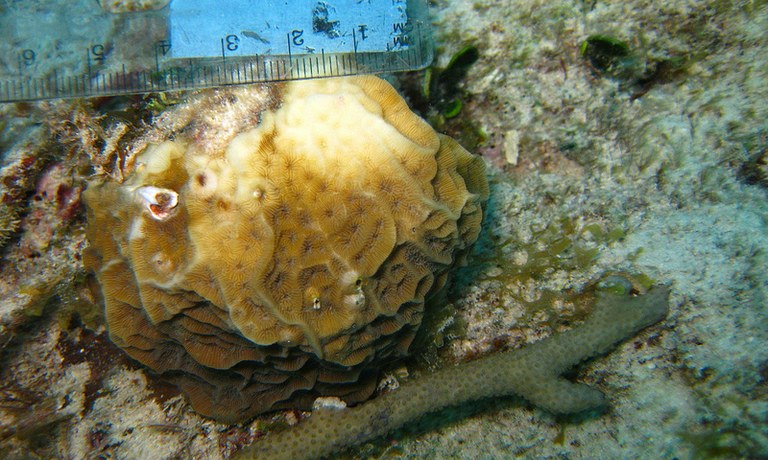 One of the largest and longest experiments ever done to test the impact of nutrient loading on coral reefs today confirmed what scientists have long suspected – that this type of pollution from sewage, agricultural practices or other sources can lead to coral disease and bleaching.

A three-year, controlled exposure of corals to elevated levels of nitrogen and phosphorus at a study site in the Florida Keys, done from 2009-12, showed that the prevalence of disease doubled and the amount of coral bleaching, an early sign of stress, more than tripled.

However, the study also found that once the injection of pollutants was stopped, the corals were able to recover in a surprisingly short time.

“We were shocked to see the rapid increase in disease and bleaching from a level of pollution that’s fairly common in areas affected by sewage discharge, or fertilizers from agricultural or urban use,” said Rebecca Vega-Thurber, an assistant professor in the College of Science at Oregon State University.

“But what was even more surprising is that corals were able to make a strong recovery within 10 months after the nutrient enrichment was stopped,” Vega-Thurber said. “The problems disappeared. This provides real evidence that not only can nutrient overload cause coral problems, but programs to reduce or eliminate this pollution should help restore coral health. This is actually very good news.”

The findings were published today in Global Change Biology, and offer a glimmer of hope for addressing at least some of the problems that have crippled coral reefs around the world. In the Caribbean Sea, more than 80 percent of the corals have disappeared in recent decades. These reefs, which host thousands of species of fish and other marine life, are a major component of biodiversity in the tropics.

Researchers have observed for years the decline in coral reef health where sewage outflows or use of fertilizers, in either urban or agricultural areas, have caused an increase in the loading of nutrients such as nitrogen and phosphorus. But until now almost no large, long-term experiments have actually been done to pin down the impact of nutrient overloads and separate them from other possible causes of coral reef decline.

This research examined the effect of nutrient pollution on more than 1,200 corals in study plots near Key Largo, Fla., for signs of coral disease and bleaching, and removed other factors such as water depth, salinity or temperature that have complicated some previous surveys. Following regular injections of nutrients at the study sites, levels of coral disease and bleaching surged.

One disease that was particularly common was “dark spot syndrome,” found on about 50 percent of diseased individual corals. But researchers also noted that within one year after nutrient injections were stopped at the study site, the level of dark spot syndrome had receded to the same level as control study plots in which no nutrients had been injected.

The exact mechanism by which nutrient overload can affect corals is still unproven, researchers say, although there are theories. The nutrients may add pathogens, may provide the nutrients needed for existing pathogens to grow, may be directly toxic to corals and make them more vulnerable to pathogens – or some combination of these factors.

“A combination of increased stress and a higher level of pathogens is probably the mechanism that affects coral health,” Vega-Thurber said. “What’s exciting about this research is the clear experimental evidence that stopping the pollution can lead to coral recovery. A lot of people have been hoping for some news like this.

“Some of the corals left in the world are actually among the species that are most hardy,” she said. “The others are already dead. We’re desperately trying to save what’s left, and cleaning up the water may be one mechanism that has the most promise.”

Nutrient overloads can increase disease prevalence or severity on many organisms, including plants, amphibians and fish. They’ve also long been suspected in coral reef problems, along with other factors such as temperature stress, reduced fish abundance, increasing human population, and other concerns.

However, unlike factors such as global warming or human population growth, nutrient loading is something that might be more easily addressed on at least a local basis, Vega-Thurber said. Improved sewage treatment or best-management practices to minimize fertilizer runoff from agricultural or urban use might offer practical approaches to mitigate some coral reef declines, she said.