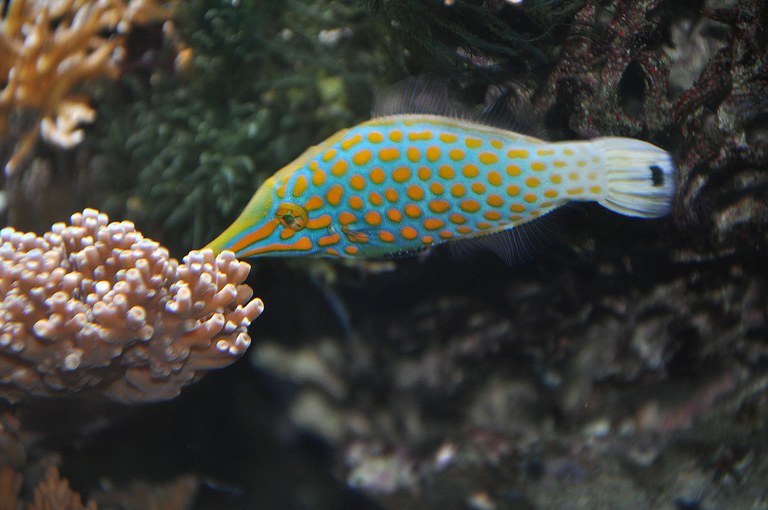 
Oxymonacanthus longirostris, AKA the orange-spotted filefish or harlequin filefish, was once thought of as a definite no-no for reef aquariums.  Filefish and corals simply can’t mix.

In recent years, several aquarists who could not resist this species’ allure (and some inspired by the success of Dr. Sanjay Joshi) have attempted to keep these filefish in their heavily stocked reef aquariums.  Two surprising observations are often reported:

So why is it that orange spotted filefish, once believed to be obligate corallivores, don’t devastate reef tanks like aquarist once feared?  Science may give us some insight.

While we long known these filefish to exhibit a strong dietary preference for Acropora millepora, researchers studying reefs after coral bleaching events discovered that Oxymonacanthus longirostris has an extreme preference for their favorite coral almost to the point of monophagy (only tolerant of one type of food).  The orange-spotted filefish would still attack bleached A.millepora even if healthy corals of other species remained high.  In coral communities where A.millepora has died out, this study concludes that the dietary preference is so strong that O.longirostris may choose to starve to death instead of eating other corals.

Orange-spotted filefish appear to be reef safe with caution, but not if you like keeping Acropora millepora.  Questions still remain about the long-term viability of weaning highly specialized feeders onto different foods and why these picky feeders in nature will adopt novel foods in captivity.

The paper is published in the scientific journal Coral Reefs.

Oh, for those interested in why these tilefish look the way they do, check out this amazing camouflage:
www.advancedaquarist.com/blog/harlequin-filefish-masquerading-as-its-prey