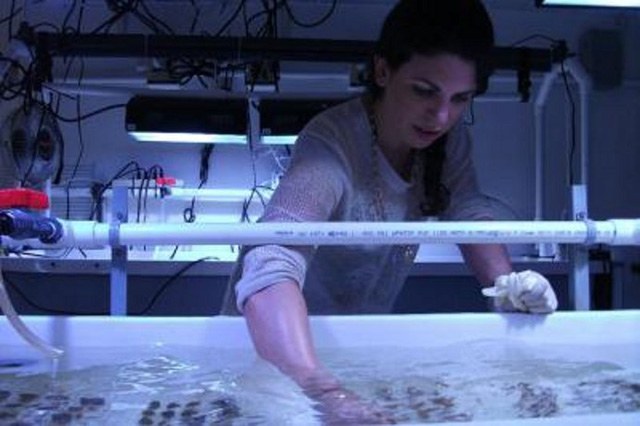 Ph.D. student Rachel Silverstein analyzed 39 coral species from DNA collected in the Indo-Pacific and Caribbean collected over the last 15 years.


A new study by scientists at the University of Miami’s Rosenstiel School of Marine & Atmospheric Science suggests that many species of reef-building corals may be able to adapt to warming waters by relying on their closest aquatic partners — algae. The corals’ ability to host a variety of algal types, each with different sensitivities to environmental stress, could offer a much-needed lifeline in the face of global climate change.

Using a highly sensitive genetic technique, Ph.D. student Rachel Silverstein analyzed 39 coral species from DNA collected in the Indo-Pacific and Caribbean collected over the last 15 years. Most of these species had not previously been thought capable of hosting more than one type of the single-celled symbiotic algae, called zooxanthellae, which live inside the coral and help to supply them with energy.

Silverstein’s results revealed that at least one colony of all 39 species tested had at least two varieties of algae, including one thought to be heat tolerant. Over half of the species were found to associate with all four of the major types of algae found in corals.

“This study shows that more coral species are able to host multiple algal symbionts than we previously thought,” said Andrew Baker, associate professor at UM’s Rosenstiel School and co-author of the study. “The fact that they all seem to be capable of hosting symbionts that might help them survive warmer temperatures suggests they have hidden potential that was once thought to be confined to just a few special species.”

More than 10 years ago, Baker was one of the first scientists to suggest that the ability of corals to associate with diverse algal symbionts may be one mechanism by which they are able to rapidly respond to environmental changes, such as increased ocean temperatures due to climate change.

“Although our study shows that different coral species do tend to have preferences in their algal partners, the fact that these preferences are not absolutely rigid means that we cannot ignore the possibility that most corals might change partners in response to environmental changes in the future,” said Silverstein.

Globally, reefs have lost more than 70 percent of their corals as a result of pollution, disease, overfishing, and climate change. Increased temperatures cause coral “bleaching,” in which corals expel their algal partners, turn pale, and often die. However, some symbionts can resist bleaching in warmer waters and may help the corals survive during stress. The ability to host multiple symbionts may help save coral reefs from future losses during expected ocean temperatures increases of 2-4 degrees Celsius (3-7 degrees Fahrenheit) by 2100.

“These new findings should encourage us to find better ways to protect coral reef ecosystems from overfishing, pollution and habitat destruction, and buy us some time to avoid the worst climate change scenarios,” said Baker, who is also a research associate of the Wildlife Conservation Society in New York.

The study, titled “Specificity is rarely absolute in coral-algal symbiosis: implications for coral response to climate change,” was published in the online edition of the journal Proceedings of the Royal Society B. Adrienne Correa, a former UM Rosenstiel School student of Baker’s and a current postdoc at Oregon State University, is a co-author on the study, as well. The U.S. National Science Foundation, the Wildlife Conservation Society, the Lenfest Ocean Program and Pew Fellows Program in Marine Conservation funded the study.