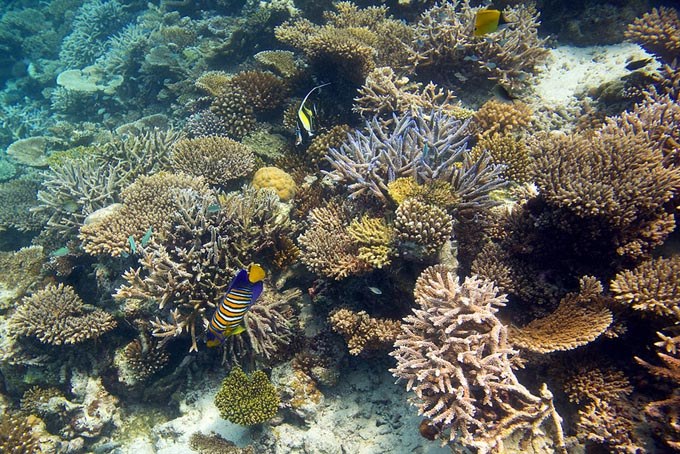 Acidification has a major impact on coral gene expression. Photo by ‘Mal B’/flickr


An international scientific team has carried out the world’s first analysis of the impact of ocean acidification on every gene in the coral genome, throwing new light on the likely fate of corals under climate change.

In recent years declines in coral calcification have been reported around the world, matching the steady rise in carbon emissions to the atmosphere from human activity.

“Every time we release CO2, it turns the oceans imperceptibly more acidic – and previous research has shown this to have a harmful effect on corals, plankton and other marine organisms which form their skeletons from calcium and carbonate,” explains Professor David Miller of the ARC Centre of Excellence for Coral Reef Studies (CoECRS) and James Cook University in Australia.

“This has big implications for the entire food web in the oceans and life on Earth generally,” he said.

“We knew a more acidic ocean was bad for corals – but we didn’t know exactly how it affected them. Our aim was to go back to basics and explore the effect on every gene in the genome of a young coral, and the job it does. This is an essential first step in gaining an accurate grasp of the impact of increased atmospheric CO2 on the world’s coral reefs and ocean life forms.”

Project scientists Dr Aurelie Moya of CoECRS and France’s Oceanographic Laboratory and Lotte Huisman of CoECRS and Amsterdam University led the experimental work, which involved raising coral larvae to the point where they settle on the reef, placing them in tanks and then exposing them to air bubbles with levels of CO2 of 750-1000 parts per million. This is projected to be the world’s atmospheric CO2 content by the end of this century, if humanity fails to cut its carbon emissions.

But the really big part of the experiment came when the team analysed the changes in signaling by every single one of the coral’s 20,000-odd genes.

“This is the first time anyone has looked at the expression of every gene in the coral genome simultaneously. It would have been impossible only a couple of years ago, but there have been huge technological advances,” Professor Miller explains.

“We were also very fortunate to be able to involve Dr Sylvain Foret, a brilliant young bioinformatician, in the data analysis.”

The answers the scientists obtained were both surprising and disturbing.

“Much to our surprise we found the rising acidity had little effect on the production of ion transport proteins that are responsible for circulating and depositing the calcium carbonate within the coral cells to form its skeleton,” Professor Miller said. “These seemed largely unaffected under high CO2.

“But equally surprising were the massive changes we observed in the expression of coral genes involved in the creating the framework required for skeleton formation: some were increased and some decreased.

“Overall it means that a more acidic ocean messes with the skeleton formation process in young corals in disturbing, but highly complex, ways,” he said.

The team carried out their research using juvenile Acropora millepora (staghorn) corals at the stage where they have just settled on a reef, as the ability to form a strong, healthy skeleton is critical in the early stages of a coral’s life.

“There have been a lot of conflicting reports in the scientific literature about positive and negative effects of ocean acidification on corals – and our research shows why. The production of the coral skeleton is a highly complex process, and it is important to address this problem one step at a time and to ask simple questions,” Professor Miller says

“In terms of the sheer volume of data, these are massive experiments that take a great deal of time to analyse.

The researchers are planning similar whole-of-genome analysis of the effects on corals of the higher ocean temperatures expected under global warming by the end of the century.