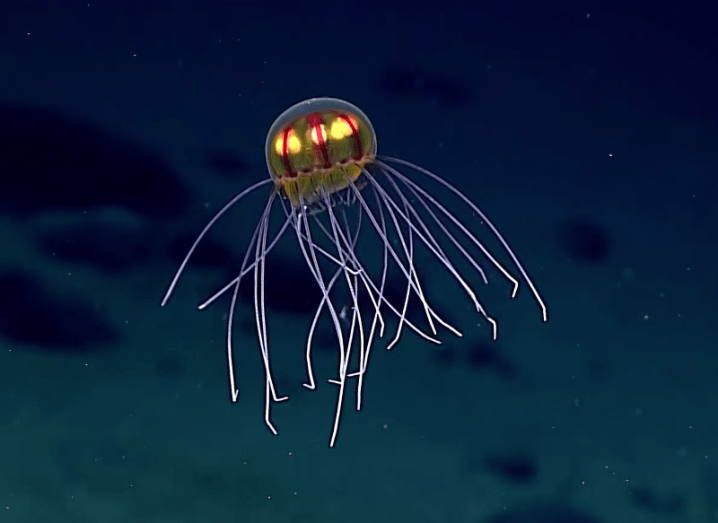 The National Oceanic and Atmospheric Administration (NOAA) captured amazing video footage of this beautiful jellyfish, which looks more like it belongs in an outer space movie than in the depths of the ocean. The video was captured during the NOAA 2016 Deepwater Exploration of the Marianas, in the western Pacific Ocean near Guam. The jellyfish was found at depths of 3700 meters by the Okeanos Explorer ROV in the Enigma Seamount (given its name based on the lack of information that scientists have on this area). The jellyfish is believed to be a hydromedusa belonging to the genus Crossota, according to the NOAA. In the video, you can see two sets of tentacles, one long and one short, that extend from the pulsating bell of the jellyfish. Scientists from the NOAA stated that the jellyfish appears to be an ambush predator, based on the fact that when the long tentacles are extended outward, the bell remains still. The NOAA 2016 Deepwater Exploration of the Marianas is a three phase mission which will take place over ten weeks. This video was captured during the first phase, which will end on May 10, 2016. The second phase will begin on May 10, 2016 and the final phase on June 17, 2016. The mission will end on July 10, 2016. MORE