The Sucky Side of Reef Keeping: Losing Fish. 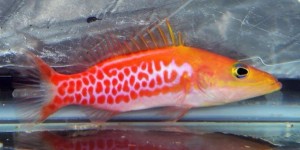 Jeremy once again has delighted me by sharing some of the inner-workings of his brain, and this time with a more morbid topic that while depressing, needs to be addressed. Whether it be from natural causes, old age, or carpet surfing, we’ve ALL been there. This topic is a tough one for me because while losing fish, no matter the cost, is always super sad, I’ve had a couple of tough losses myself. A suicidal Suess fish ended up being a pricy piece of jerky (and if you follow Rich Ross’ “Skeptical Reefkeeping” feature in our online magazine, you’d know he posed the question of whether Suess fish are jumpers. Well if they get too close to a cuttle enclosure when sneaking around their egg crate barriers, they definitely are), a Gem Tang who lost a fight to a bitchy Clarion angel, and a dwarf cuttlefish who had the unfortunate experience of being raped to death by her mate. It really, really blows. Not only is it a lot of money you’re losing – it’s a life that more often than not that ends far too soon. I don’t even want to THINK of what’s going to happen when we lose one of our Personatus angels – I’ll probably have a massive funeral – you’re all invited. Moving on, let’s get down to Jeremy’s article on the topic. He’ll inform you with excellent info on what to do when you have a loss, what to address in your tank, how to prevent unnecessary deaths, and how to best ensure your fish are happy, healthy little swimmers for the duration of their natural life. Muchas Gracias, Mr. Gosnell!

“When I was three years old, my parents got me a 4 gallon aquarium. I was thrilled, as the tank had a built in filter, light, and all the trimmings of a 1984 all in one aquarium. One weekend, they took me to a local pet shop to pick out a goldfish. We brought the fine creature home, (who I aptly named Goldie) and a whole lifetime of fun and adventures started. Well, not really. Goldie turned out to be a garden koi, which outgrew its four gallon tank in no time. Soon, Goldie was renamed floaty, because it was dead. I don’t remember this a whole lot, but I am reminded of it by my mother, who claims for a period of time after the fishes’ passing, I was inconsolable.

The point of this trip down memory lane is simple, fish die. In 33 years, for me, not much has changed. Today, when a fish dies in one of my aquariums, I don’t cry for hours or scream at the ceiling as my body fills with a pathetic uncontrolled rage. Though, deep down, there is that feeling of utter failure. I am sure many reef aquarists have felt it. You believe that you’ve done everything right, checked every detail, and for some reason, a specimen doesn’t make it. Sometimes, it’s the result of a parasitic or bacterial infection, and try as you might, you could not cure it in time. Other times, a specimen simply stops eating one day, only to be found days later, floating around the tank hardly recognizable. If you have a good clean-up crew, often a specimen will just disappear, with bits and pieces showing up as time goes on.

I don’t care what even the most callous aquarist may say, losing fish sucks. It’s not fun, it’s not easy and it can make us question why we remain in the hobby. Like everything in life, losing a fish is a lesson. Whether it be a lesson in the natural process of aging and death, when you lose a specimen, it’s a good time to reflect on your aquarium husbandry. Reality is, unless you are a public aquarium, or have had a specimen for a very long time, it’s unlikely you will lose a specimen to old age. Large marine angelfish, surgeonfish and other species, grow very large, and many aquarists give them away, or sell them, long before they reach old age in the aquarium. I once had a female maroon clownfish, who was adult size when I got her, and I gave her to fellow aquarist after keeping her for over 11 years. While lifespan is most certainly dependent on species, in general, fish are long lived creatures and with proper husbandry, you will be saying goodbye to the family dog, before your prized fish specimen.

When a fish dies, a good first step is a total water quality check. This is beneficial for two different reasons: 1, it keys you in to anything that may have changed, causing the fish to perish and it lets you know if having a deceased fish in your system, has upset your biological filter. While most established and properly filtered reefs can handle a decaying fish, especially with an appropriate cleaning crew, it’s good to make sure so much waste hasn’t spurred a sudden spike in nitrate, phosphate or even worse, ammonia. If you do detect something like ammonia, it’s best to assume that even if the deceased fish caused it, likely something was off kilter, before the specimen perished. Ammonia spikes are common when a new tank is cycling, and beneficial bacteria cannot keep up with waste, but if they occur in an established tank, then something has killed off a significant amount of bacteria. In this case, get your hands of both an aerobic, and anaerobic bacteria booster, use as directed, and make sure media for the bacteria to colonize is in place. Typically, your live rock suits this purpose best, but temporarily running an air driven sponge filter can help speed up the process of re-establishing your bio-filter.

After a water quality check, it’s valuable to spend some time observing your fish. Is someone showing major aggression to other species? Aquarists that keep Sohal Tangs, are likely to find a few specimens perish over time. As they grow, Sohal Tangs become extremely aggressive, first to fish that look or behave like them, and eventually to everything else. Many aquarists don’t know, Sohal Tangs are intolerant of wrasse species, and will literally pick them to death, regardless of tank size. Even if you don’t keep a Sohal Tang, fish species change as they grow, and two fish that got along swimmingly before, may be at each other’s throats now. If you find aggression, and assume it was enough to kill a specimen, first try totally re-arranging your tank. If that doesn’t work, you can try netting the aggressor, and placing that species in your QT system for several weeks, and re-introducing it. This can act, as a sort of re-set button, placing the aggressive fish back lower on the aquarium’s social chain, curbing the aggression. Sometimes though, it simply doesn’t work, and an aggressive species simply goes right back to being aggressive, in no time flat. If you have one fish that is pushing all the others around, it’s often best to get rid of it, and donate it to an aquarist who keeps species suited to deal with a belligerent fish.

Once you’ve made sure neither water quality, nor aggression is the culprit behind the fish death, also check all of your pump intakes, etc. Even well-made circulation pumps, such as Eco Tech’s vortech series, can pull enough water to suck a fish in. The larger the pump, the larger the species it can grab. If you notice any of your other animals struggling to stay outside of a circulation pumps current, perhaps either slow it way down, or add a foam piece around the intake. Foam pieces are handy at keeping both fish, and other reef dwellers out of pumps, but they require almost daily cleanings, as they create a detritus trap.

After you’ve ensured water quality, aggression, and pump intakes didn’t kill your fish, it’s time to review recent tank maintenance, or changes. This is one of the reasons it becomes crucial to keep a tank log, and websites like Aquatic Log, or software like the Reef Tank Pro app, can make logging what goes on in your aquarium super easy. Did you glue any corals in place? If so, is it possible that some of the glue wasn’t dry, and your deceased specimen took a curious nibble? When this happens, the super glue can set inside the fish’s sensitive mouth, damaging the gills or sealing up the respiratory tract. Did you conduct a larger than usual water change, was there perhaps something about the make-up water that wasn’t 100%? Did you add any antibiotics? What cleaner did you use on your filter socks, did you rinse it enough? Any new equipment, reactors perhaps, could they have caused some immediate, temporary shift in water chemistry, that shocked your fish? While most tank management goes off without a hitch, it only takes one simple mistake, to cause fatal problems for one particular specimen.

Keeping a detailed tank log, and using a fish death as a time for close observation and rampant testing, can make sure that you don’t repeat the same mistake that cost one fishes’ life. Sudden fish deaths are disheartening and upsetting, while also being a major expense. From a standpoint of sustainability, they are a major downer as well. Using a log, and carefully re-inspecting your husbandry upon loss of a fish, can help you learn and grow as an aquarist. As Yoda would say, “Always learning, a good aquarist is.”

Ok – so get the basics down. Know your husbandry, keep your water parameters in a proper range, and feed high-quality food, like Larry DuPont’s Reef Frenzy. Best of luck and don’t kill anything!