For those of you who do not know me, I have a 500G reef dominated by SPS corals that has been running, successfully by most standards, for the past 4 years.   Every night before I go to bed, I give my tanks a quick check.  Last night I checked the tank and all my corals were fine.  This morning when I checked the tank, one of my prized “Strawberry Shortcake Acropora” colonies had a huge white patch on it.  The tissue just flaked off overnight.   Half of the colony still has tissue on it.  Why did this happen?  All of the other corals are fine?  Is it time to panic with the fear that the “RTN” (rapid tissue necrosis) will spread rapidly throughout the tank?  Is this a random occurrence or the start of a pattern that something is about to go significantly wrong in my tank?   Should any corrective action be taken?  Typical dilemma when something goes wrong. 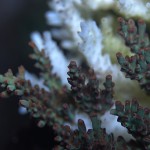 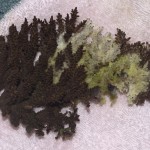 I am going to think aloud here and walk through my current thoughts.  It is a rather large colony of one of my prized corals. I really do not want to lose it; the first thing I am going to do is to cut a few fragments of it and plant them in a different location in the tank.  If possible I’ll move it to a different tank, but there I could run the risk of introducing some unknown pathogen if that was the cause.  But if I do not move it to a different tank it could RTN in the current tank since the conditions that it is exposed to have not changed.  Unfortunately, the same thing happened to a Lokani colony a week ago.  So now there are 2 occurrences of a similar event… start of a pattern or just 2 random occurrences?   Tough call to make, but if it is the start of a pattern the damage could be extensive.  At this point I am just going to not react quickly, try to save a few coral frags, and watch carefully.  Should I do a partial water change?  Or would that stress the corals out, making them more susceptible to whatever caused it in the first place ?

As you can see there is no easy call to make on this one.  Now the mind starts to run to assign a potential cause since it would point to a possible solution.  The water parameters check out O.K.  No drastic changes to the tank in the last month or so.  Ah.. must be the Bio Pellets that I added three months ago, or the fact I had skipped a water change while I was away on vacation, or the fact that I added 3 new fish yesterday.  But my engineering and statistics training has taught me – “Correlation does not imply causality.”  We are especially inclined to assign a cause to every problem without knowing if it is the action (or lack of action) that caused the event.  At this point I am going to just shrug my shoulders and let things go, especially since the cause is mostly likely undiagnosable.  Hopefully I will manage to save a few pieces of the coral and end up with more than one colony in the long run, or I will be knocking on the doors of my friends for a replacement.