Summer May be Over, But Things are Heating up at the Long Island Aquarium 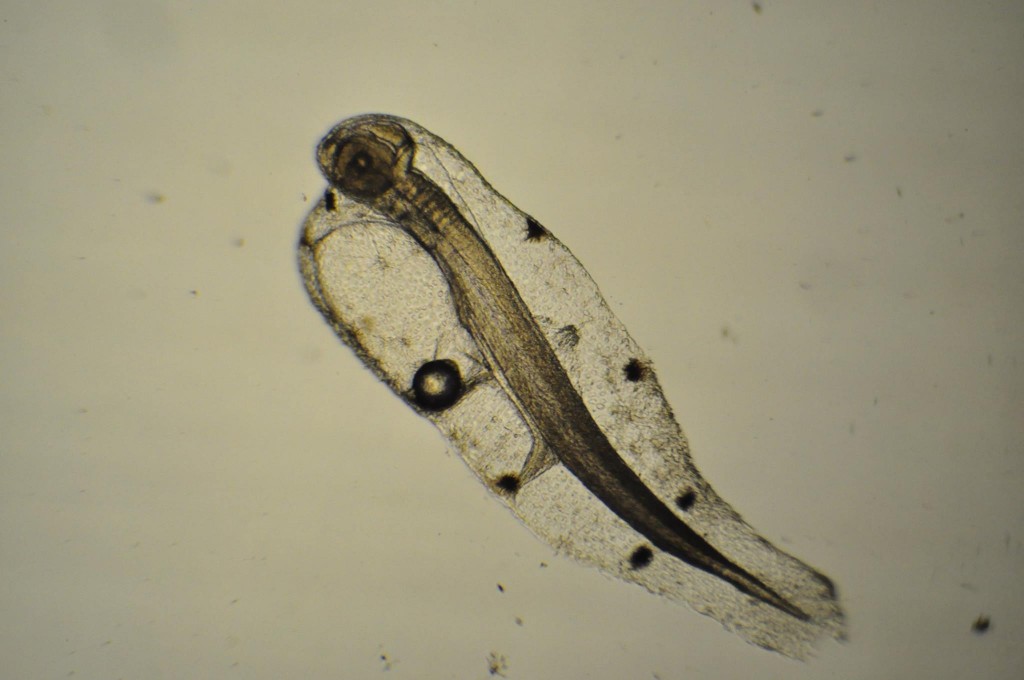 Summer is over; fall has seized Long Island. The waters are cooling down, the tropical fish that we’ve enjoyed collecting all season will soon be gone from our bays and inlets. At the LI Aquarium, the summer exhibits are closing and the visiting crowds have changed from the wall-to-wall traffic of the summer to the school groups that descend on us in the fall.

You might assume our job slows to a lull now, but you would be dead wrong. This is actually my busiest time of year. I have started ramping up my copepod productions and setting up my rearing vats, because guys… it’s aquaculture time!

I am still in my first few weeks of egg collecting, and boy am I off to a great start. Last week, I saw my biggest spawn to date from my broodstock of Swiss Guard Basslets (Lipproma rubre). Pictured above is a newly-hatched rubre prolarva. At only 12 hours post-hatch, this prolarva is stunning- not only is its fin folds unique, but it is also bright and shiny in my rearing vats. Hatched at a whopping 3mm, these are one of the smallest prolarva I have ever worked on. I am only a few days into their long larval period, and it’s hard to tell what will happen. Thankfully, I can get advice anytime I need it from the Basslet Overlord, Todd Gardner. One day soon, I hope to conquer this species, so that I can learn even more about pelagic larvae.

The swiss guards aren’t my only spawning broodstock.  There are a few new species that I have added to the mix. And one of them has began to spawn. What is it, you ask? You won’t find that out until I raise them. Just to add to the excitement, here is a picture of one of the new species’ eggs: 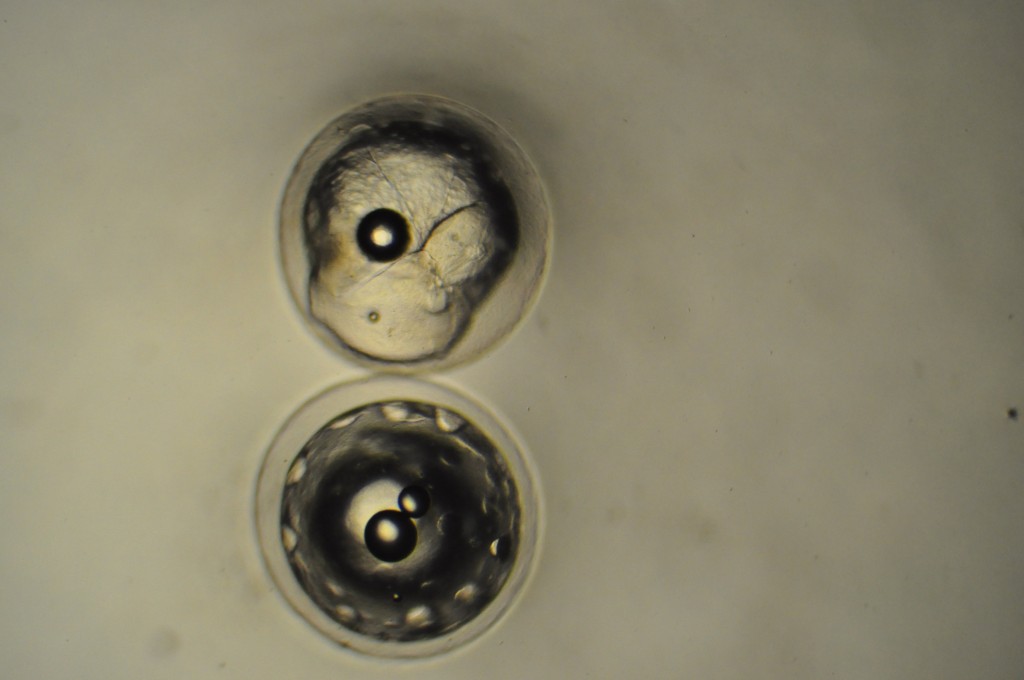 I am also collecting eggs from the reef tank. Remember the blood moon, that every single person in the universe was talking about a few weeks ago? I was very curious to see how that increased gravitational pull would effect the spawning in the tank. My answer? The fish didn’t care for it, and I collected a measly 300 eggs – one of the smallest spawns I have recorded to date! My only reward was I received more variety than usual; out of the 300 eggs, I had at least three different types of prolarvae. Notice the differences between them, keeping in mind that these are all taken under 10x. 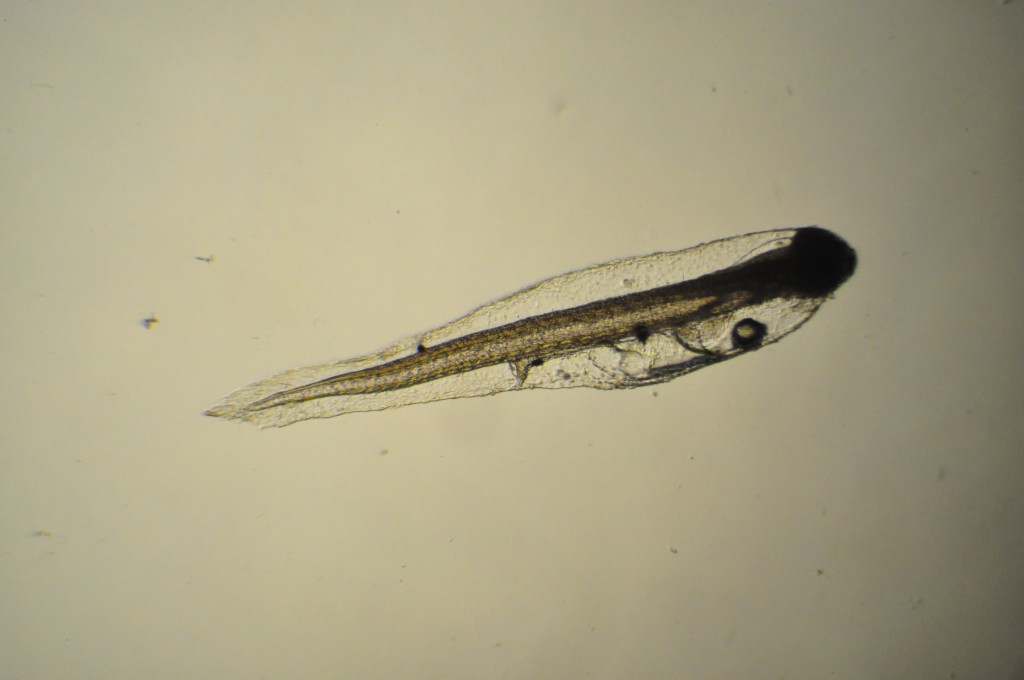 Species A. has a very elongated prolarva. It has the smallest oil globule and the skinniest notochord of the three. 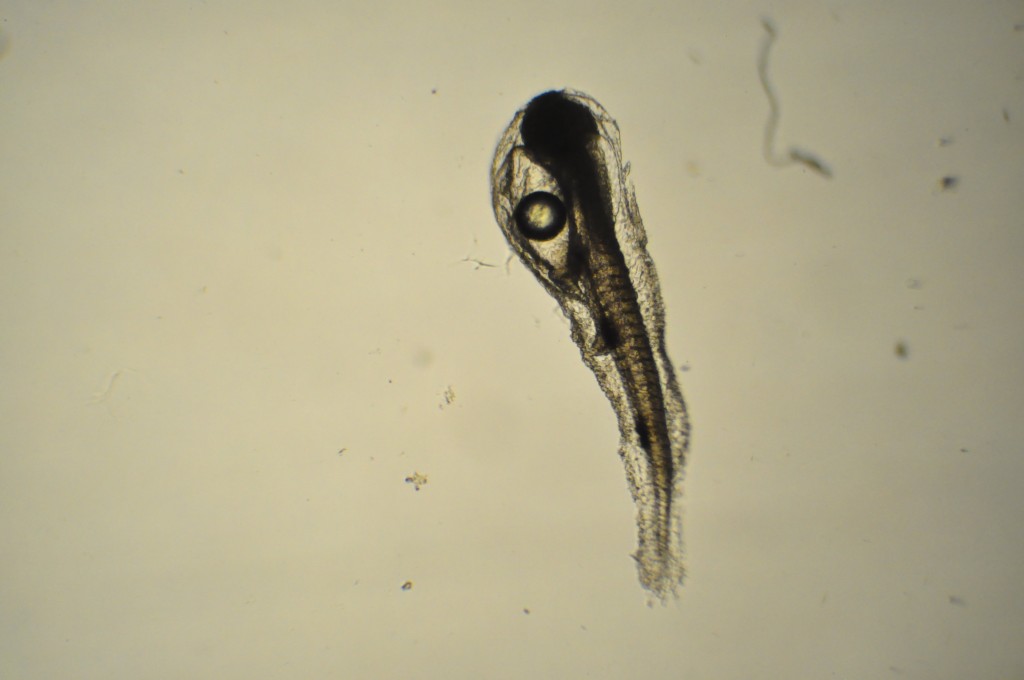 Species B. is much stockier than species A. It is shorter, with a thicker notochord. It also has a larger oil globule (compared to the size of its body) 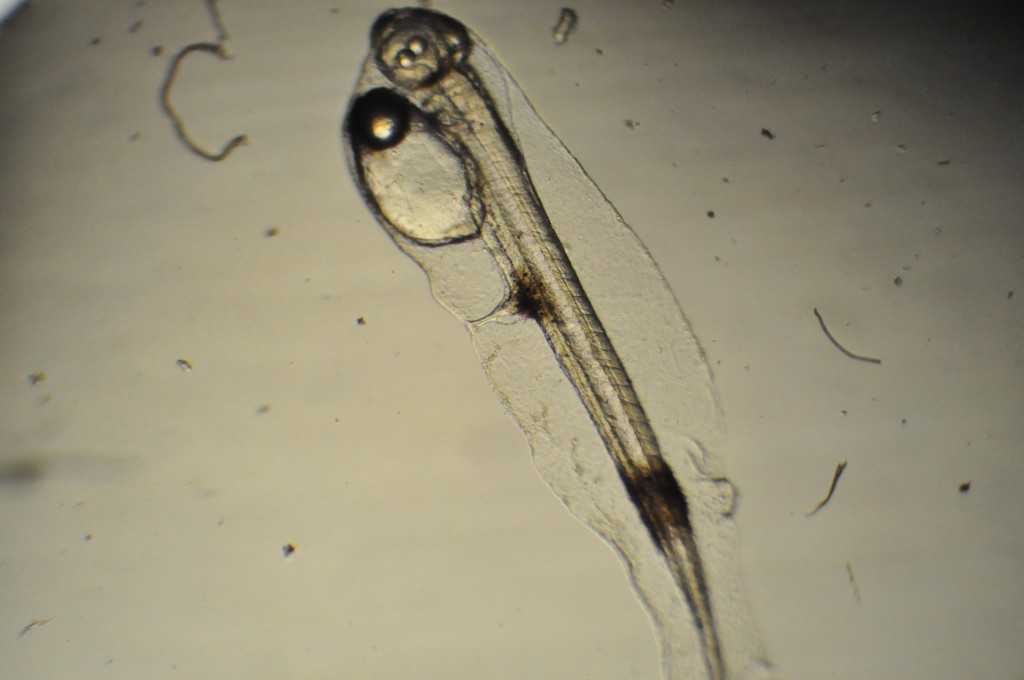 Species C. barely fits into the image, it is by far the largest of the three. I have seen this prolarva before, and I believe it is a barred flagtail (Kuhlia mugil). Take note of how much more developed it is then the other two. It has a thick, long notochord, which has some coloration. It has already begun to develop eye spots, and has a large oil globule. Obviously, I will not know what species these are for certain until they develop more; as you are reading this, they are only beginning their first feedings.

All my successful my summer projects have reached settlement. Here they are now, little juvenile fish: 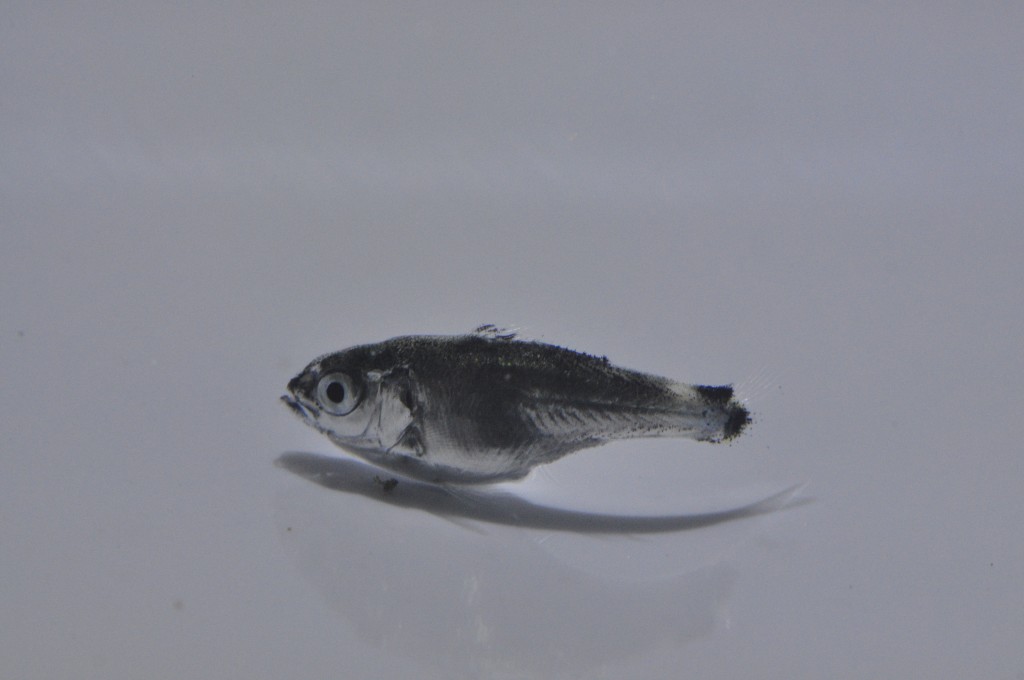 That first pelagic eggs I collected back in June ended up being Flagtail (Kuhlia mugil). These guys have not been easy – they have a very high mortality rate, and a fairly long settling period. In fact, it took them 45 days to settle out! Out of the 60 I started with, I only ended up raising 1. Not a very successful run, but I plan to work with that species some more and improve my survival rate. Todd Gardner actually raised these fish a couple years ago with the same broodstock parents; you can find his article on that subject here. 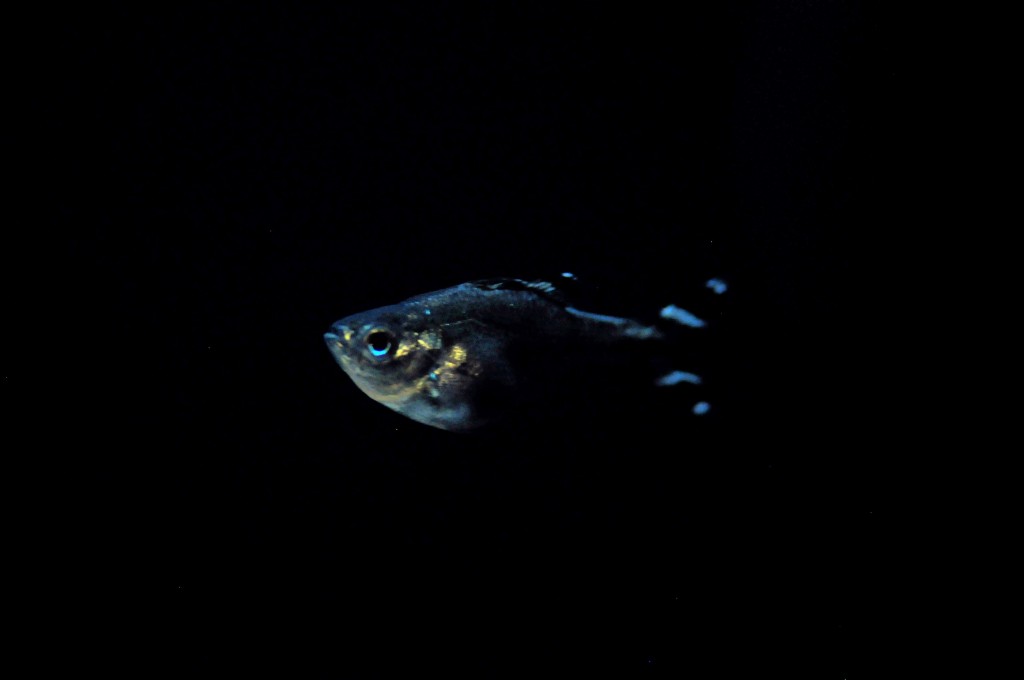 Do you remember all the damsels I collected (if not, you can read about it here)? I have some good results to report: Out of the 60 I added to the 1000-liter vat, I successfully raised 46. Out of those, 45 were Bowtie Damsels (Neoglyphidodon melas) and 1 was a Ternate Damsel (Amblyglyphidodon ternatensis). I also raised 7 Ternate Damsels in the smaller vat. The 7 survivors are very interesting – they’re a different species from the larvae in the 1000 liter vat, but were from the same collection. It may just be an interesting stroke of luck, but I wonder if the difference can be attributed to the different feedings I experimented with. These 7 were kept in a harpacticoid culture, and their diet was exclusively Harpacticoids, with no other food being offered to them. I have a lot of theories on this, and I’m excited to explore the experiment further. 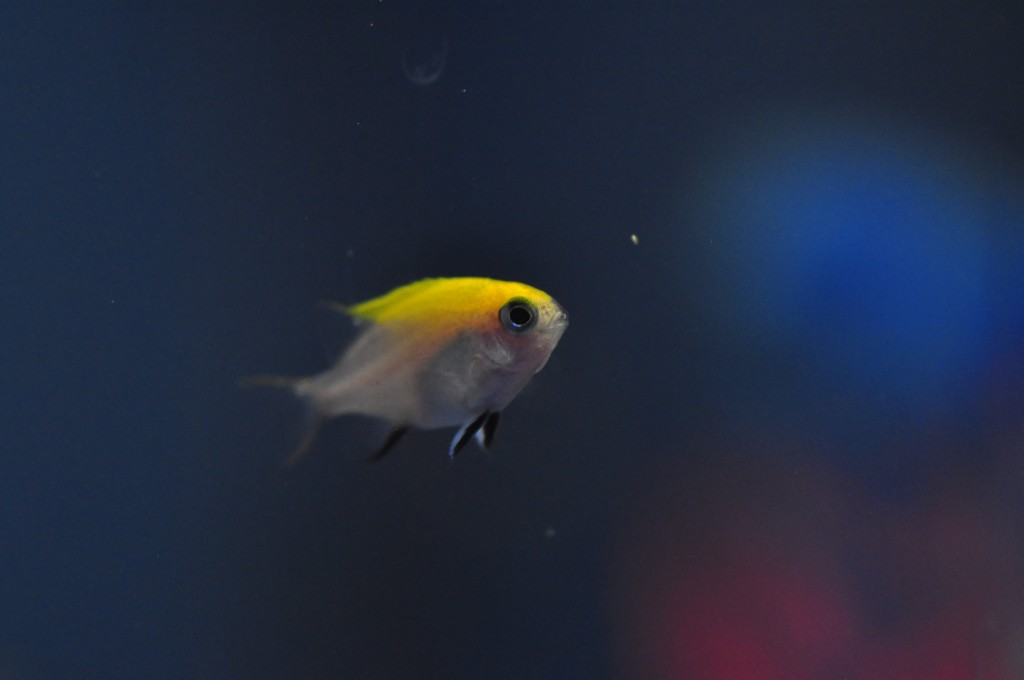 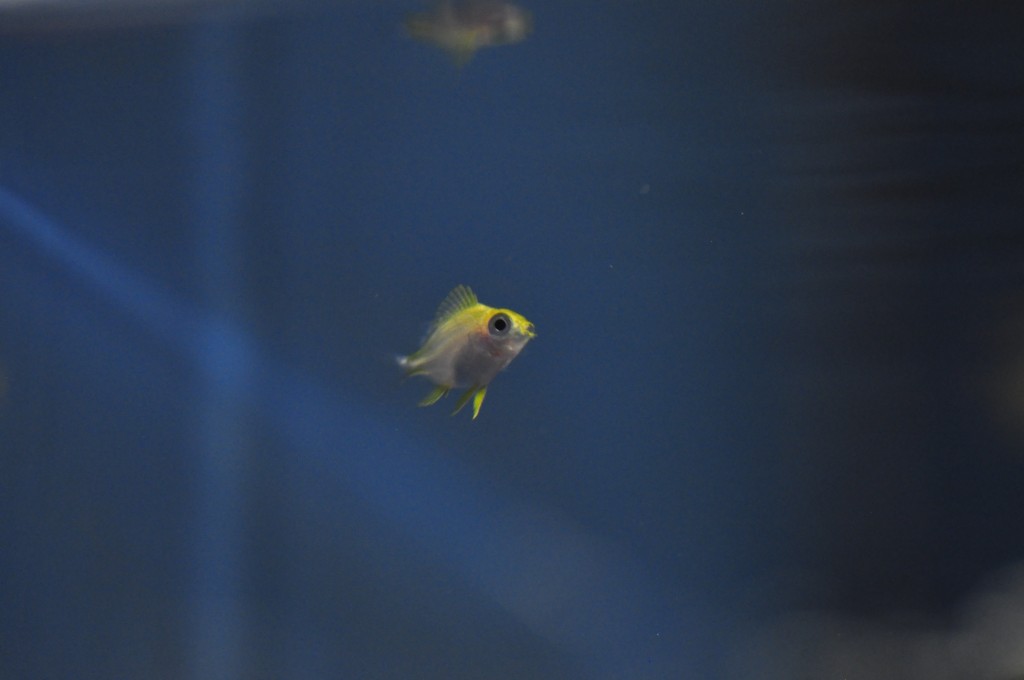 I also discovered that the smaller pelagic species I had in with these damsels were Anthias. I received a surprise second chance with them, but I lost them all at 31 DPH due to a bottleneck issue that I have yet to identify and solve. Hopefully, as the fall progresses, I will have more chances to rear Anthias.

There are a lot more exciting things in the works for this fall, and I look forward to keeping you guys updated along they way.