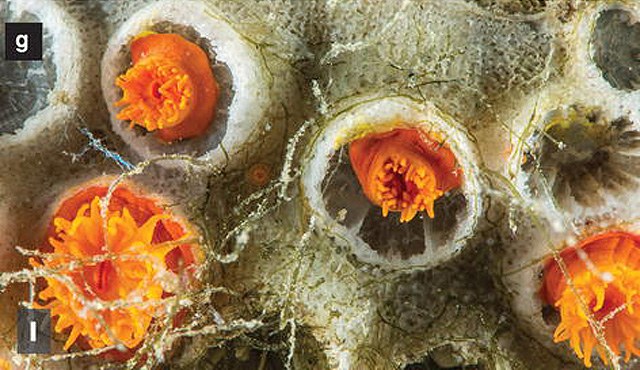 
In a few species of corals, polyps can detach from their skeleton and float off to settle elsewhere.  Many reefkeepers have reported polyp bail-out in corals such as Pocillopora, Catalaphyllia (AKA elegance corals), and Euphyllia (hammer, torch, and frogspawn corals).  This form of asexual reproduction is generally regarded as a defensive mechanism triggered by stress, although some corals such as Pocillopora seem to do this even when the parent colony is thriving.

Budding of sun corals is well documented.  Parent colonies will produce tiny planulae and broadcast them into the water.  In fact, Steinhart Aquarium biologists have farmed Tubastraea by collecting budded planulae and growing them into mature colonies.  However, polyp bail-out was not known in Tubastrea “sun corals” until this year when researchers documented the phenomenon in Tubastraea coccinea.

The photo below tracks the seven month development of a sun coral polyp bail-out.  During its early days (photos a-d), x-rays confirmed the coral lacked any hard skeletal structure.  By the sixth and seventh month (photo e-f), the polyp was still alive and attached itself to substrate by secreting a new skeletal base.