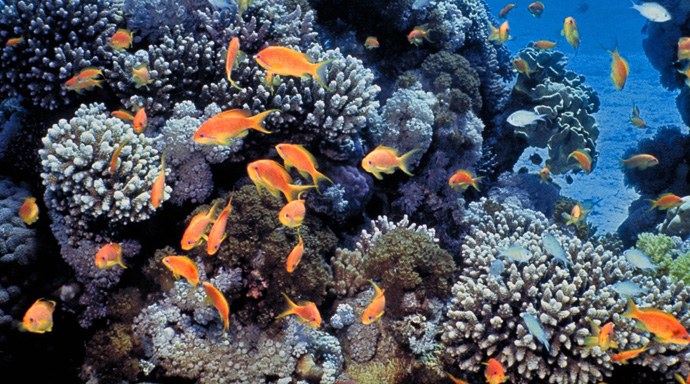 Reefs in the Middle East experience some of the hottest temperatures. Photo by Daviddarom (C.C.)

A new species of algae has been discovered in reef corals of the Persian (Arabian) Gulf where it helps corals to survive seawater temperatures of up to 36 degrees Celsius – temperatures that would kill corals elsewhere.

The paper, which reports the breakthrough discovery, is published in the journal Scientific Reports from where it can be freely accessed via http://dx.doi.org/10.1038/srep08562.

“We found that commonly applied molecular methods did not give enough resolution to distinguish the dominant symbionts of Gulf corals from those in other parts of the world’s oceans,” explains Professor Jörg Wiedenmann, Professor of Biological Oceanography and Head of the Coral Reef Laboratory at the University of Southampton. “However, when analysed by alternative molecular biological approaches, we found pronounced differences that set this heat tolerant species clearly aside. We named it Symbiodinium thermophilum in reference to its ability to survive unusually high temperatures.”

Reefs are made up of many coral species, most of which live in a mutually beneficial relationship with microscopically small algae hosted in their tissue. These symbiont algae produce sugars that contribute to the diet of the coral in return for shelter and nutrients that are vital for algal growth.

However, the symbiotic association is vulnerable to changes in environmental conditions, in particular to increases in seawater temperature. Heat-stress induced loss of the algal partners from the coral host can result in the often fatal process known as ‘coral bleaching’.

“Understanding how corals survive under the extreme temperatures in the Gulf will give us important insights into the ability of reef corals to handle the heat stress, which is threatening their survival in the oceans that are warming up in response to climate change,” explains Professor Wiedenmann.

“We monitored the symbiotic partnership over several seasons to ensure that this association was stable through a range of thermal conditions,” comments Professor John Burt from the New York University Abu Dhabi. “We can confirm that this new type of alga is indeed the year-round prevalent symbiont across several dominant coral species from the Abu Dhabi coast of the United Arab Emirates,” he adds.

“It gives hope to find that corals have more ways to adjust to stressful environmental conditions than we had previously thought,” adds Professor Wiedenmann. “However, it is not only heat that troubles coral reefs. Pollution and nutrient enrichment, overfishing and coastal development also represent severe threats to their survival. Only if we manage to reduce these different forms of stress will corals be able to benefit from their capacity to adjust to climate change.”

[via University of Southampton]