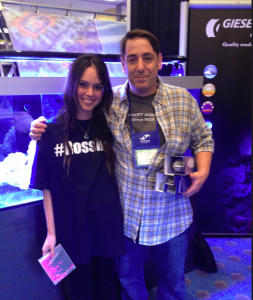 There’s no secret of my adoration of Richard Ross, a great influence to myself and countless others within the industry, as I wrote about how I was very much looking forward to his talk this year (it was riveting – he took the mundane topic of “phosphate” and made me give a hoot). The second Mitch Carl sauntered on stage with his #Rossing tee (that I am now the proud possessor of), I got a little jolt of glee – there was no doubt in my mind of who had won. Not only was this my first MACNA ever, and certainly not my last, but I got to enjoy Rich’s humble, albeit brief, acceptance of the honorary award. The prospects were all very well-deserving this year, so it was an incredibly close race. There were a few moments throughout the night I doubted my prediction, and thought perhaps Karen Brittain would take the honor for her breakthroughs she accomplished captive-breeding the elusive Genicanthus personatus angelfish. However, as the night progressed, and Mitch tip-toed the line of what many considered an R-rated roast of Mr. Ross, broaching controversial topics such as religion, child abuse, and kinky reef sex, it became quite clear that Mr. Ross was indeed the recipient. Loaded with priceless and hysterical visuals, one of which I was delighted to see I made a little cameo in, Mitch pushed the limits for the duration of the night. Rich was quite gracious in his acceptance, spurting out a few words of thanks to his peers. It might be quite some time before Mitch is invited back to repeat his raunchy act – but I’d love to see him up there again all the same. 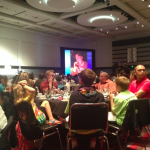 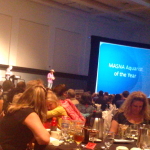