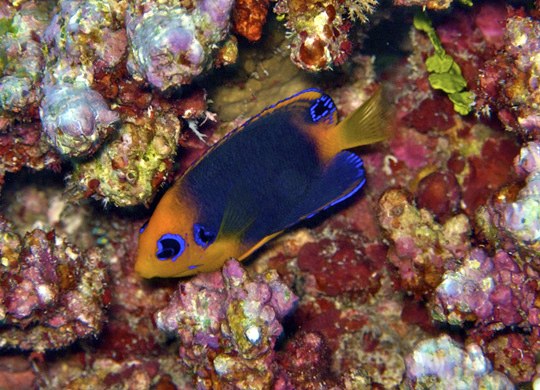 
Centropyge hotumatua was known only to exist at a few island reefs in Southern French Polynesia: the Austral Islands, Rapa Island, Pitcairn Island, and Easter Island – that is until this month when surveyors from the Global Reef Expedition discovered the beautiful dwarf angelfish at Gambier Archipelago, a remote and relatively unvisited rocky reef island chain.

Very few marine aquarists have ever seen a Centropyge hotumatua, let alone know about this species due to its extremely limited and remote geographical distribution.  As far as I know, the last Easter Island Dwarf Angelfish collected for the aquarium trade was over ten years ago (at least for the US market), and I know of no living specimen currently in captivity.  The new discovery of Centropyge hotumatua at Gambier Archipelago still won’t mean we’ll see this species imported anytime soon, but it’s cause for excitement nonetheless.

[via Science Without Borders]