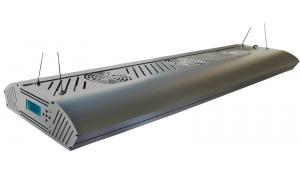 German Based company SMD Aquarastik recently released a new type of LED fixture using a RGB chip to bring better color and more flexibility to our aquariums. There’s not much detail on their site about this fixture yet, but from the video demo of one in operation, you can see that it’s going to have some pretty amazing features. All three colors appear to be dimmable individually or together, and different chips also appear to be controlled separately. Just imagine the lighting effect that can be managed with this kind of flexibility!

The RGB chip in SMD’s fixture is the key to its expanse of colors. An RGB chip is composed of separate sources for red, green and blue which mix together to form literally any color of the rainbow. This means that unlike most LEDs on the market who use a very closed spectrum that can’t be adjusted, these chips can be tuned to throw just about any spectrum you can think of! They appear to have found one that gives nice color while still maintaining a natural white look.