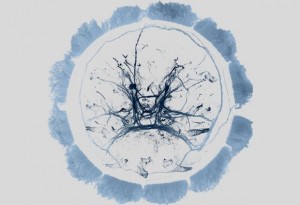 Well this is pretty interesting – turns out the sleep hormone melatonin that’s responsible for jet lag in humans has a similar effect on plankton. Supposedly, it could possibly be the cause of mass migration of the little guys in the ocean, according to scientists at the European Molecular Biology Laboratory (EMBL) in Heidelberg. They’ve discovered that melatonin most likely governs their  nightly migration from the surface to deeper waters. Since the hormone is essential in maintaining our daily rhythm, scientist believe this role most likely evolved early in the history of animals and sleep patterns. So what’s the difference in how melatonin effect vertebrates vs. invertebrates? Detlev Arendt’s lab at EMBL took a close look at the marine ragworm Platynereis dumerilii to find answers. Because the worm’s larvae take part in what’s considered to be, in terms of biomass, the world’s largest migration, it makes them a perfect subject. Using their microscopic cilia “flippers” to propel them to the surface each day, the larvae reach the surface at dusk, then dive back down to the deep abyss where they’re shielded from harmful UV rays at the height of day. Researchers believe the melatonin is triggered by photosensors in the larvae’s brain, signaling the hormone to be produced at night. This then regulates the neurons that determine their day to night behavioral patterns. This study also suggests that the cells that control our very own sleep rhythms may have first evolved in the ocean, hundreds of millions of years ago, in response to protecting ourselves from the damages of the sun. You can read more about this compelling story over at Science 2.0.