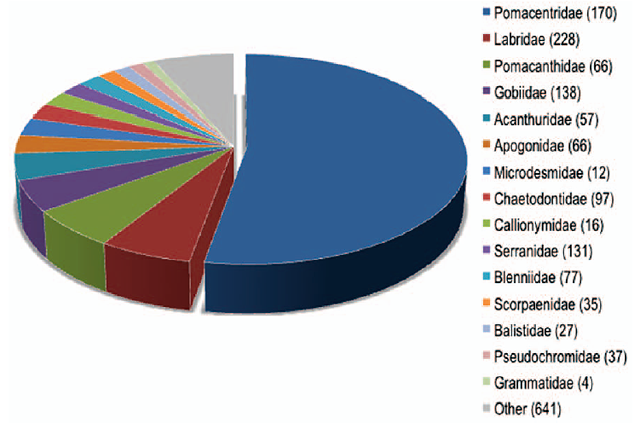 Composition by family of marine aquarium fish imported into the United States. Data for the top 20 families are provided, with the remainder grouped as ‘other’.


The study, Revealing the Appetite of the Marine Aquarium Fish Trade: The Volume and Biodiversity of Fish Imported into the United States, was published yesterday in PLoS ONE by researchers Andrew Rhyne, Michael Tlusty, Pamela Schofield, Les Kaufman, et al.  It is an unprecedented detailed investigation of importation records over a one-year period from 2004-2005 and compares invoices and shipping records to discern the total number of both species and individuals imported into the United States.

They also found that “the number of individual fish listed on shipment declarations matched the invoices only 52% of the time and in total, volume was over-reported by 27% as shipments were often mislabeled to contain marine fish” when in reality they contained freshwater fish.

Top 20 marine aquarium fish imported into the United States. * indicate species complexes, which could represent more than one species which are all traded under the same name.

Read the public-access study at PLoS ONE for a dizzying amount of impressive and important data.

Ultimately it is hoped that the system utilized by Dr. Rhyne and others in this study could one day prove useful to the United States’ government for more real-time monitoring of marine fish imports. This, in combination with a fast, non-lethal method for screening for cyanide fishing in imported marine fish, could “reduce the risks inherent to the wildlife trade and to protect listed species (CITES). The system could also assist wildlife inspectors with identification of thousands of species from across dozens of phyla.”