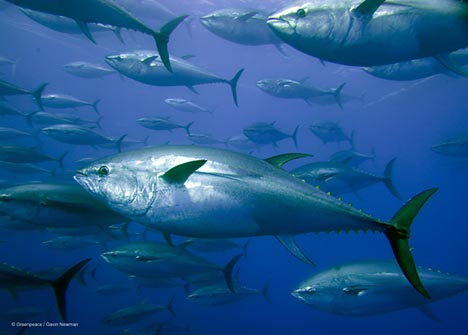 Global appetite for Tuna has increased tremendously over the last few decades. As such, along with the rapid surge in consumption has also included alarming decline in wild tuna species. There was a time when farming of tuna was considered impossible. Luckily that is no longer the case. In 2012, farmed fish accounted for over 42 percent of total global output, nearly tripling since the 13.4 percent in 1990.The Pacific Blue Fin Tuna, weighing up to 900 lbs and traveling so fast they can cover crazy distances in short times, seems to defy the principle of farm raised fish.Blue Fin Tuna is known as ‘Porsche of the Sea’, for its ultra desired status. It is estimated there are less than 9 million Blue Fin Tuna left in the wild. While that number seems high, it is down 50 percent in the last decade. Kinki University in Japan has been working to combat those figures by recreating the reproduction cycle of Blue Fin in Captivity. The article goes on to describe the struggles and triumphs nearly 5 decades of the making of the success of the farming of the Blue Fin Tuna. This is some amazing work that is being done and hopefully paves the way for more facilitites like this in the near future.  MORE