Jellyfish are possibly the most exciting addition to the marine aquarium hobby since the introduction of the living coral reef tank by George Schmidt aquarium back in 1984. Those amazing looking displays of beautifully sculpted jellyfish creatures that float so gracefully are now being tank raised and offered for sale. Additionally, there are also display systems offered as self-contained free standing systems, called the Jelliquarium, specifically designed for use within homes and offices. 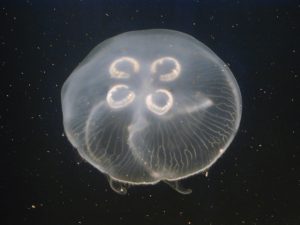 Public aquariums display jellyfish in large circular or oval tanks called kreisels. The basic idea of a jellyfish tank is to create a means where water enters and exits the tank, as well as, suspends its inhabitants weightlessly within the center, all without damaging the soft gelatinous bodies of the jellies.

Water is introduced into the tank in the form of a layer of water, called a laminar layer, which moves along the inside circumference of a round or oval tank. This layer acts as a boundary and it is the mechanism that keeps the inhabitants suspended within the tank. In general, the incoming water is diffused across a large screened exit. This current of water gently pushes the jellies away from the exit screen, and that exit screen is so exaggerated in its size that its ‘draw’ is so diffused, or weak, that the jellyfish typically are not pulled into it.

Jellyfish are from the animal kingdom branch called Cnidaria. All Cnidarians share a similar body plan, which can be described as a sack within a sack. These organisms posses no distinct head or structural organs, and yet they all possess one thing in common, Cnidae, specially modified stinging cells or nematocysts.

The four basic groups of Cnidarians are Anthozoans, which contain the familiar anemones and corals, Hydrozoans, such as Fire coral, and Cubozoans, which contain the extremely dangerously Box Jellyfish. Scyphozoans being the forth group of Cnidarians contain the more familiar jellyfish. The 200 plus species of scyphozoans range from a simple 1 centimeter clear disc to a huge multicolored organism with long and numerous dangerous stinging tentacles. 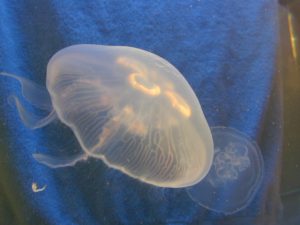 If you look hard enough within the marine aquarium hobby there are a few species of jellies available. Basically it comes down to two different groups, photosynthetic and non-photosynthetic, meaning one group requires strong light, similar to a live coral reef tank, to stimulate an internal algae, called zooanthellae. The most common of the photosynthetic jellies is the Upside Down Jellyfish, Cassiopeia sp., followed by the Blue Blubber, Catastylus sp., and the Spotted Lagoon Jellyfish, Mastigia sp. These are warm water tropical specimens and as such are much more active. These photosynthetic specimens require strong light stimulation along with planktonic food supplementation. Within my scope of feedback success has been limited. 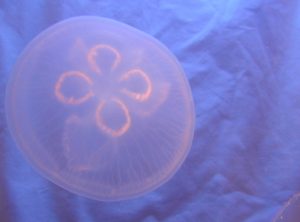 Non-photosynthetic species, which are typically temperate or cold water, are the Moon jellyfish, Aurelia aurita, and a few species of Sea Nettles, Crysaora sp. These jellies require no significant light and rely 100% upon planktonic food collection and small fishes as its source of energy.

The Moon jellyfish species are the most documented and easiest to raise of the jellyfishes. They are commonly seen in shallow harbors or boat marinas and are recognized as a pale white pulsing disk with a recognizable four leaf clover design within their round bell. The bell is edged with a fringe of fine tentacles that help transfer food items to the four trailing oral arms.

Contrary to popular belief, Moon jellyfish have a very mild sting, if any at all. It is quite possible that some may have a greater reaction than most others, so care should always be taken when handling any jellyfish. Many other species do involve quite painful stings and could involve medical treatment.

Moon jellyfish are sexually active at an early age. As with many aquatic forms of life the male releases sperm into the water column which fertilize the eggs that the female has attached to her oral arms. Once the fertilized larvae have detached from the female they will settle out into the tank and develop into a stationary polyp. 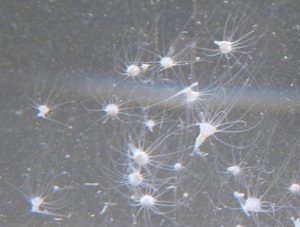 A Moon jellyfish polyp looks a like tiny white anemone which attaches itself to almost anything. Most polyps seem to settle out in areas where the water flow is slow enough to allow the larvae simply to drop down onto the bottom of the container. It is these polyps that appear within the Ephyra Tanks during the juvenile jellyfishes grow out period, which is 60 to 90 days, and are the reproductive result of the jellies raised in that specific tank, hence sexually active at an early age.

As with most Cnidarians a jellyfish polyp is composed of a central column that has a foot for attachment and an oral disc for the intake of food and exit for waste products. The oral disc has a number of tentacles surrounding it, which provide protection through stinging and capture of food items. It is this oral disc that produces, or segments and separates from the polyp in what is commonly called asexual division, budding, or also referred to as strobilation. 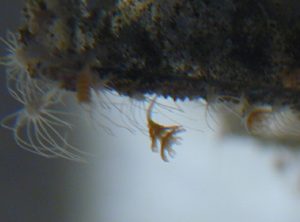 As a result of strobilation the oral disc portion of the polyp detaches from the main body of the polyp and pulses away. This pulsing disc, which resembles a small snowflake, is now a free swimming juvenile jellyfish called an Ephyra.

Ephyra actually begin pulsing before they detach from the polyp. It is this pulsing that is the main method of separation from the polyp. The pulsing is not just a means of propulsion but is also how the jellyfish moves its food items to its mouth. Moon jellies do not pursue food items, more so they simply bump into it. As the bell portion of the jellyfish comes in 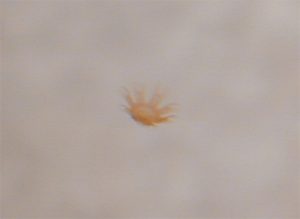 Up to this point a simple square cornered tank or even a glass jar with a slow flow of water running through it, can hold your polyps but from this point onwards these small jellies need a flow of water that keeps them moving and suspended. This is achieved through the use of slight aeration or a tank designed for this need, such as an Ephyra Tank. Ephyra need to be kept in suspension at all times. If allowed to settle they will quickly become consumed by rouge polyps, deformed or perish as a result of starvation. 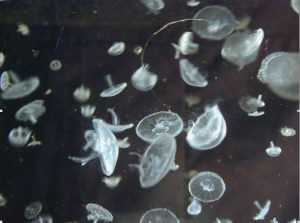 Within the next two weeks the Ephyra go through a slight metamorphosis. First is the development of the four oral arms that trail below the disc. These oral arms are what will pull the food up into the jellyfishes body cavity. Next to change are the eight radial arms that begin to fill in between with a solid tissue and develop into the more commonly seen bell shape.

From day one both the polyps and Ephyra are fed freshly hatched, and enriched in some manner, baby brine shrimp. Feedings are two to three times a day depending on how fast you want them to grow. Growth rates are anywhere between 60 and 120 days to become a 2 inch diameter Moon jellyfish. 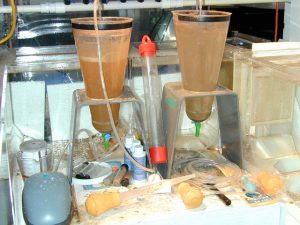 As the jellyfish grows beyond the 2 inch size they should be fed food items that are larger in size. There are a number of planktonic foods available. All are eagerly drawn up by the jellies and noticeably fill their digestive guts with the food items. I suspect that it is the nutritional value of the food items, along with variety, that will sustain or improve the quality of life of these juvenile jellies. The advantage to live brine shrimp is that it will stay suspended within the water column, whereas the prepared ‘planktonic’ foods will settle out and ultimately need to be siphoned out from the bottom of the tank. The disadvantage to brine shrimp is its low nutritional value, and that’s where the benefit, along with convenience, is in favor of the “planktonic” foods.

Maintenance consists of wiping algae growth and siphoning out waste and uneaten food debris. Algae growth is based on the amount of light and the length of time that the light source is on. Wiping algae from the interior is like any other aquarium. One uses a hand pad or a pad on the end of some long handle. Free floating and heavier debris will settle at the bottom of the tank and will need to be siphoned out. This becomes a surgical process as one can easily suck up jellyfish if they get too close to a siphon intake.

Moon jellyfish do not acclimate very quickly to different salinities so the amount of water used in a water change, or the result of siphoning out debris, is relatively minimal. The replacement water should be of the same salinity, pH and temperature, the later being a bit more difficult, and only enough to replace the siphoned out water. Taking into consideration that jellyfish are 95% plus water they will react negatively if their aquatic environment is radically altered. Moon jellyfish that are attempting to adjust to big changes will respond by bloating and decreasing the amount of pulsing.

It is not a good idea to mix species, and never collect or capture jellyfish with a net. Always use a container that the entire animal can fit into and simply scoop the jellyfish from its tank or shipping container, supporting them by a container full of water. I have found that by placing a finger size hole in the bottom of a plastic container allows me to drain some of the water from this transfer container. This finger hole allows me to move the container through the water easier when it is submersed.

When raising Moon jellyfish they need to be fed a minimum of twice daily. At first this seems like a daunting task but once you get into the routine it is not that time consuming. Freshly hatched brine shrimp can be easily raised if you have the right equipment. Decapsulation and enrichment are additional chores that you may decide to get involved with. Once the jellies reach 2 inches other larger food choices, such as frozen Cyclopeeze, should be fed. These thawed or liquefied foods are dispensed easily with a turkey baster directly into the tank.

Lighting is dependent on the species being kept. Some jellyfish, like corals, are photosynthetic. Moon jellyfish are non photosynthetic and do not require light. A brightly illuminated tank shows off its inhabitants well but also requires more effort with algae growth.

Overall the entire process is fairly easy, once it’s understood, and the amount of daily time is minimal, once routine and the proper equipment are used. The end result is a spectacular display of fluid sculpture the aquarium hobby now has to offer. Something like a living lava lamp.