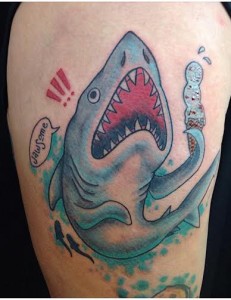 Early in the 20th century, New London, Ct was a thriving port city, with a raucous nightlife fueled bu sailors and alcohol. In fact, my band practiced in an old speakeasy with a beautifully tiled indoor pool, dating from the from the prohibition era.

It is said that the town wanted to discourage unruly Navy seamen from invading downtown New London (In Eugene O’Neil’s iconic works, it is known as “uptown”, as the city’s more well-to-do upper class lived 1 mile south of the city center). To achieve this, the town’s council enacted many new ordinances, including outlawing tattoo shops in the city of New London.  Just a few years ago, that ordinance was lifted, and there has been a sort of tattoo parlor renaissance in my old hometown. 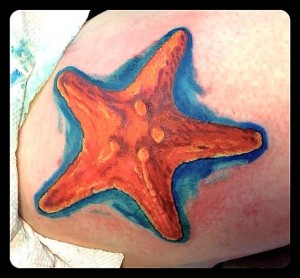 Over the years, I have been a particular fan of the work of Elisha Schauer. I saw her art at friends’ houses, at local art shows, and online. These days, she is a tattoo artist at New London Ink, and I really dig the skin art that she has been sharing.

The tentacles of all things fishy and reefy runs deep in popular culture. I’m proud to be a part of such a creative, thriving tattoo culture that can bring people into closer contact with our beautiful (and sometimes funny) ocean  world.