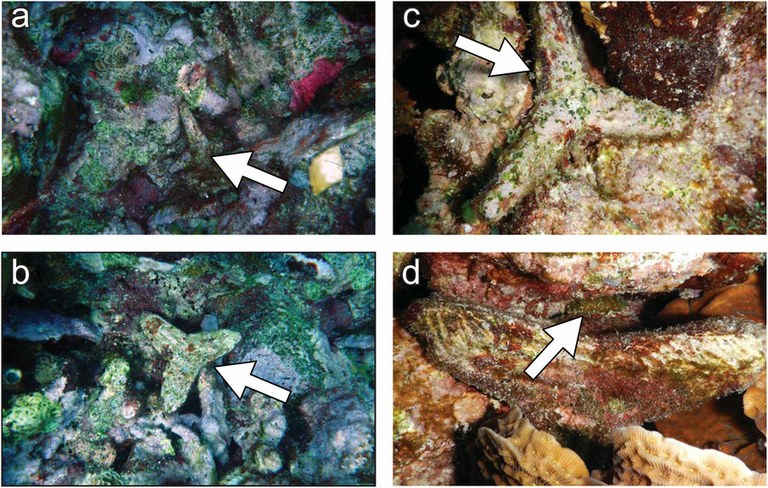 One of the biggest problems with coral frag transplantation is that outplanted corals are easily dislodged by animals or waves resulting in low survival rates.  This type of restoration is also a very labor-intensive process that requires transporting large fragments (what many reefkeepers would consider “colonies”) with drilling equipment and epoxy in tow to affix the frags to the reef.

The researchers settled on plugs designed in the shape of tetrapods. Massive concrete tetrapod structures (seen right) are already widely used to build wavebreaking walls along shorelines because they’re known for stability due to their interlocking shape.  Their multi-faceted projections are great at stabilizing the tetrapods on uneven surfaces, which should make them a suitable shape for coral plugs.

Researchers planted seeded tetrapods across a variety of reef sites to measure how well they would hold up under real reef conditions.  It turns out tetrapods work exceptionally well:

After the first two weeks and during the subsequent 5.5 months, 50% of the tetrapods never moved. After one year 76% of the tetrapods could be recovered of which 84% were either firmly lodged in crevices or cemented to the reef framework by encrusting benthic organisms

Furthermore, about 10% of the corals on the tetrapods survived and grew.  While this number may seem low, conventional outplanting techniques (e.g. drill and epoxy) has less than a 5% survival rate after one year according to the study.  In other words, the paper claims that coral survival rates on tetrapods were double that of frag outplanting.

The biggest advantage to tetrapods is that they can significantly reduce costs of reef restoration by an estimated 5 to 18x!  Divers not only did not have to bring along drilling equipment and epoxy, but tetrapods saved a lot of time since all you had to do was wedge them into rock crevices.

The findings are published in Nature.

Inspiration for a better frag plug?

As for how this research may be applicable to aquarists, reefkeepers may want to revisit how we design our frag plugs.  The conventional “mushroom” frag plugs we’re all accustomed to does its job, but I think I can safely say we’ve all had our fair share of problems with affixing them securely in our tanks.  A new shape – say, tetrapod frag plugs? – might prove to be a much better solution.