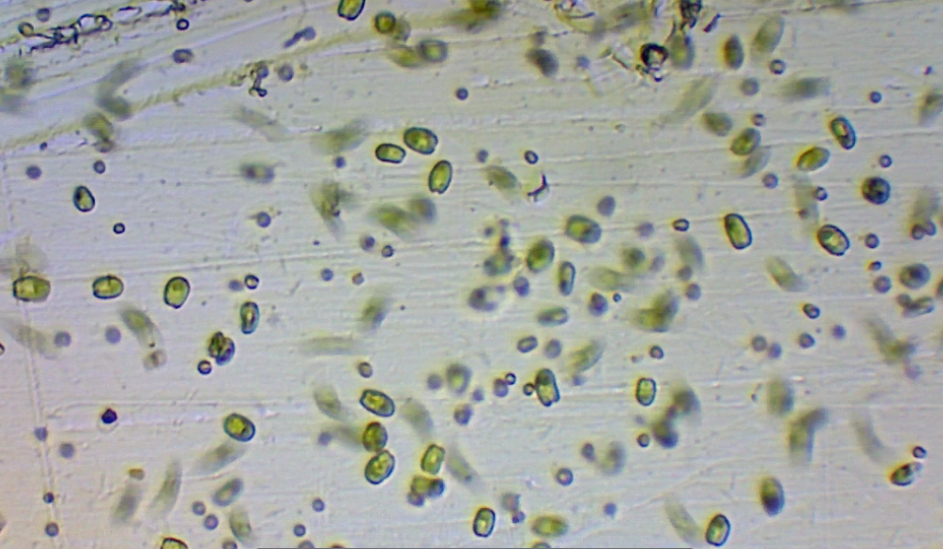 Phytoplankton has infinite applications in the reef aquarium hobby and greater industry. All of the world’s nutrition is largely derived from marine phytoplankton. Marine autotrophs alone are capable of producing the massive amounts of precious fats, proteins, and pigments necessary to support the long-term health and coloration of all other marine life. Live phytoplankton allows for the captive rearing of aphotosynthetic corals, oysters, clams, scallops, porcelain crabs, and other filter feeders. Live phytoplankton enhances the nutritional profile of rotifers, artemia, and copepods so as to allow for the sustainable aquaculture of reef fish and invertebrates. Microalgae can even consume toxins in wastewater, so as to allow its reuse. It is the necessary ambition of the advanced aquarist to seek out the power of phytoplankton. Once harnessed, it can allow for the creation of a great many things…

Phytoplankton’s most profound power is the ability to rapidly assimilate inorganic waste such as ammonia, nitrate, phosphate, and carbon dioxide through the magic of photosynthesis. Microalgal cells are indescribably complex nanofactories capable of creating a seemingly infinite array of proteins, lipids, carbohydrates, pigments, enzymes and other metabolic compounds. Each algae species has its own distinct nutritional profile, which can vary greatly with environmental conditions and specific genetic composition. The aquarist seeking to benefit from phytoplankton will find a lipid-producing species that will also survive in the conditions of the aquarium. As with corn, soybeans, chickens, and pigs, humans have selectively bred various microalgal strains to improve their production capacity and nutritional profile. What is a good nutritional profile? For the reef aquarist and marine aquaculturist alike, fats are king. Polyunsaturated fatty acids (PUFAs), specifically arachidonic acid (ARA), eicosenoic acid (EPA), and docosahexaenoic acid (DHA), are the essential cellular fuel of all marine organisms. Also important are sterols, which allow for the composition of hormones and other nuanced molecules. Ideal microalgal species also produce valuable pigments which act as potent antioxidants, accelerate oxygen absorption, and enhance the coloration of the organisms which consume them. An ideal phytoplankton for the reef aquarium hobby and the aquaculture industry is one that produces these valuable nutritional compounds, but can be cultivated at high densities and remain alive in the fridge. 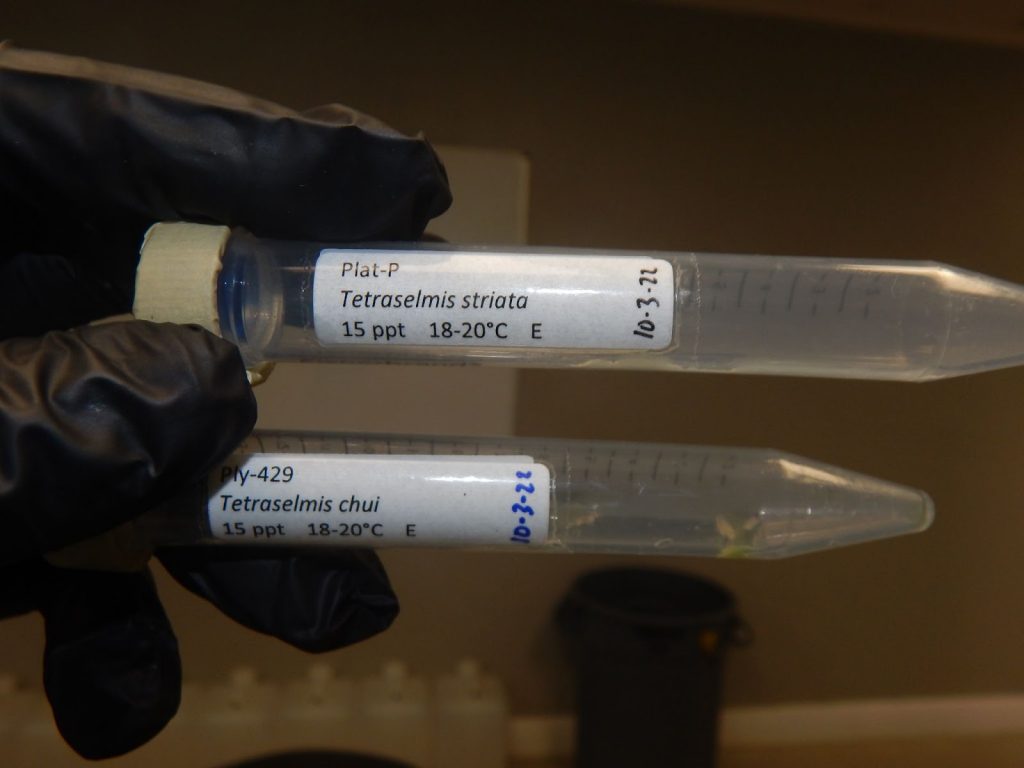 Microalgae strains are researched, organized, maintained and distributed by government laboratories such as the NOAA Lab in Milford, CT.

Tetraselmis chuii is such an algae.

Tetraselmis chui is a marine chlorophyte. This means that it is a member of ‘Green Algae’ and is  VERY distantly related to contemporary land plants. In reality, Tetraselmis has evolved into its own beautiful uniqueness. Each cell is roughly (12-14um) in size. Tetraselmis chui is biflagellate, meaning it has two cellular ‘whips’ that it can and does use to rapidly whirl around. This species can also anchor itself to a substrate (often in response to low flow or high light), forming a biofilm which in and of itself has unique properties/behaviors. As a whole, Tetraselmis chuii has a relatively elastic range of both temperature and salinity. Overall it should be noted that the species survives and thrives at reef aquarium salinity (1.0263) and temperature (78-80F). In fact, Milione et al 2008 demonstrated that such water quality conditions coupled with high light intensity was associated with elevated lipid production in Tetraselmis chui. Furthermore, it has been demonstrated that nitrogen/phosphorus starvation stimulates cellular storage of PUFAs. This suggests that when live Tetraselmis cells are dosed into an oligotrophic reef tank…they immediately begin to swell with fatty goodness…becoming perfect packaged pillows of cellular nutrition. 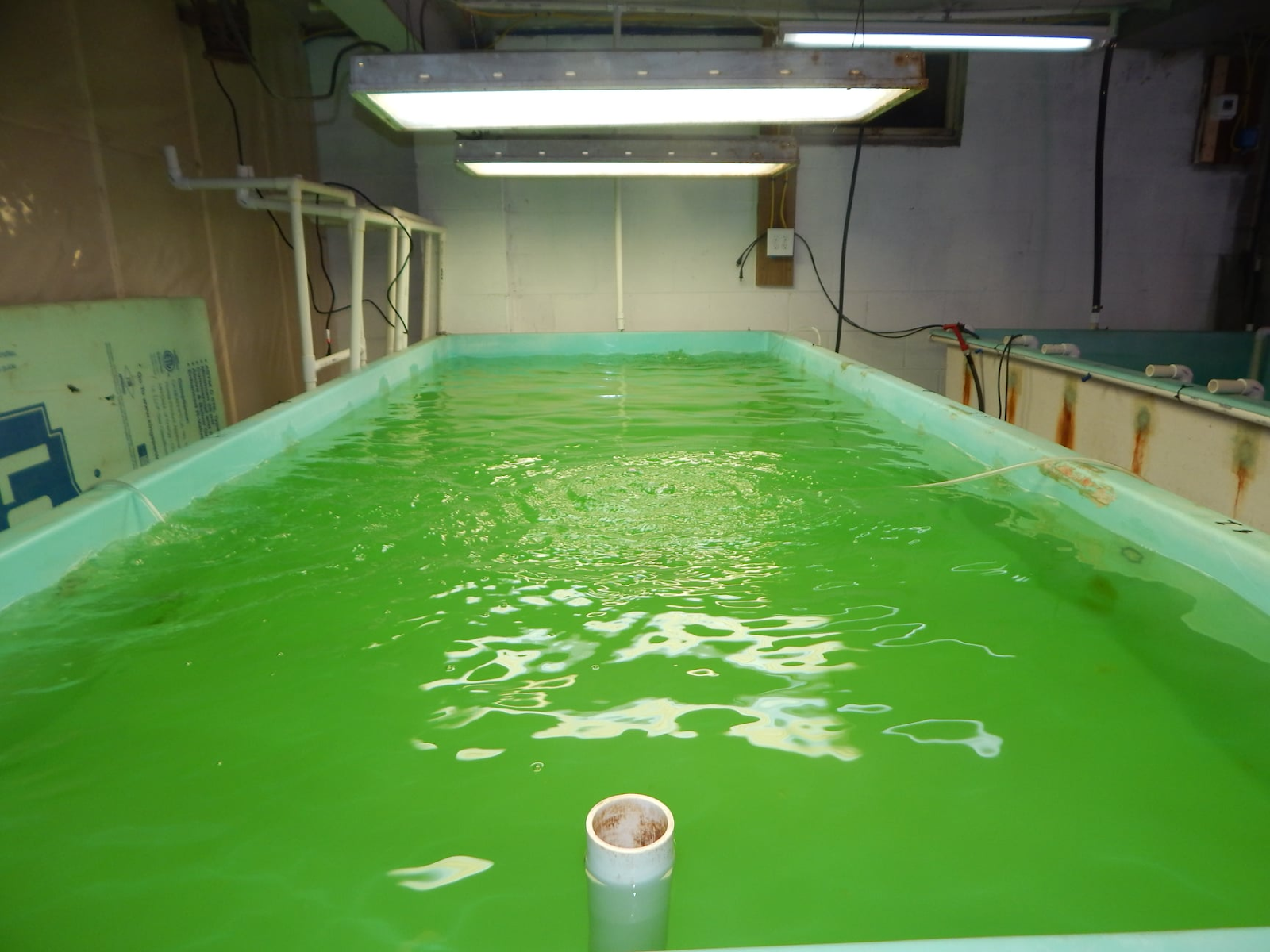 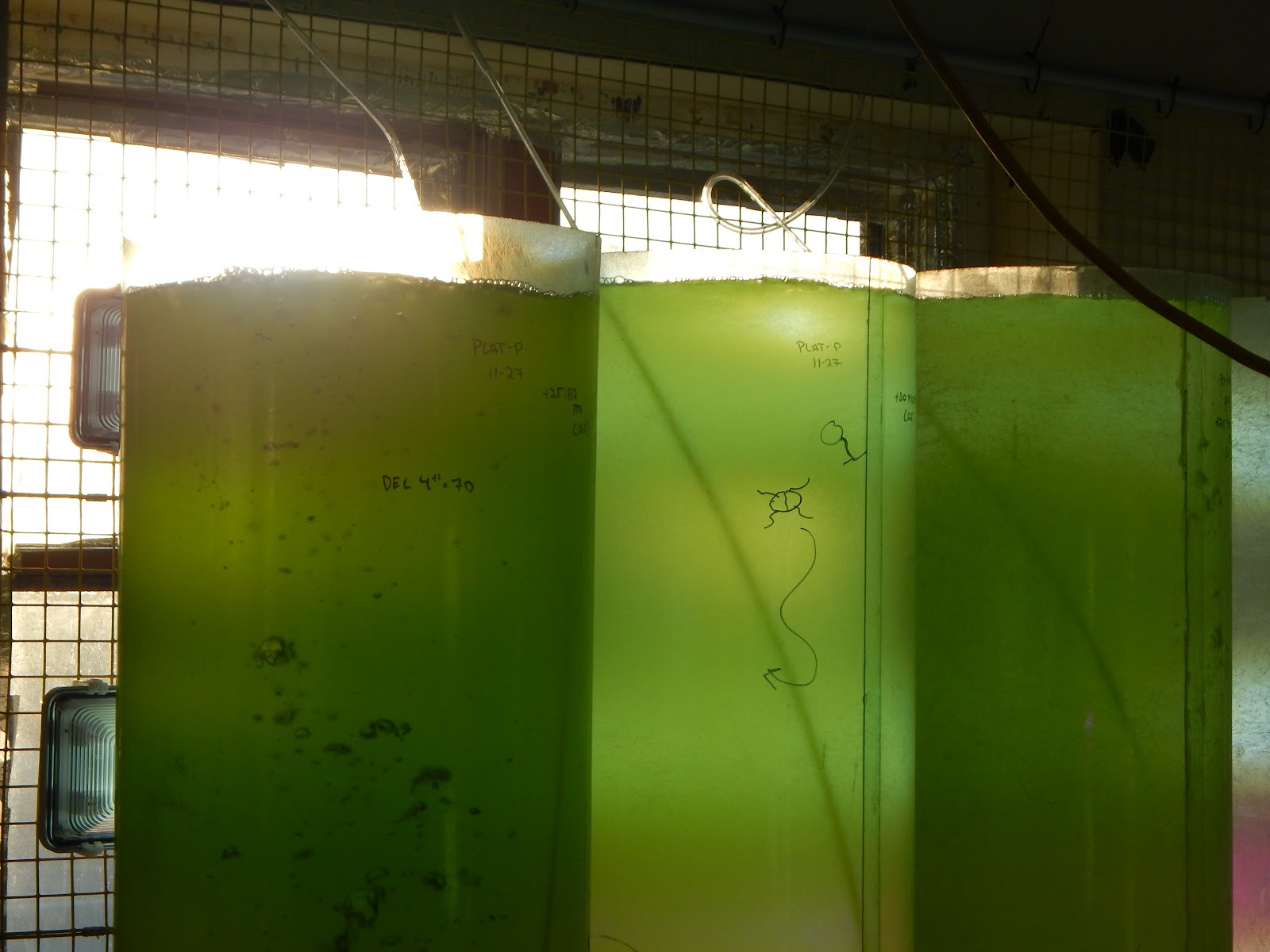 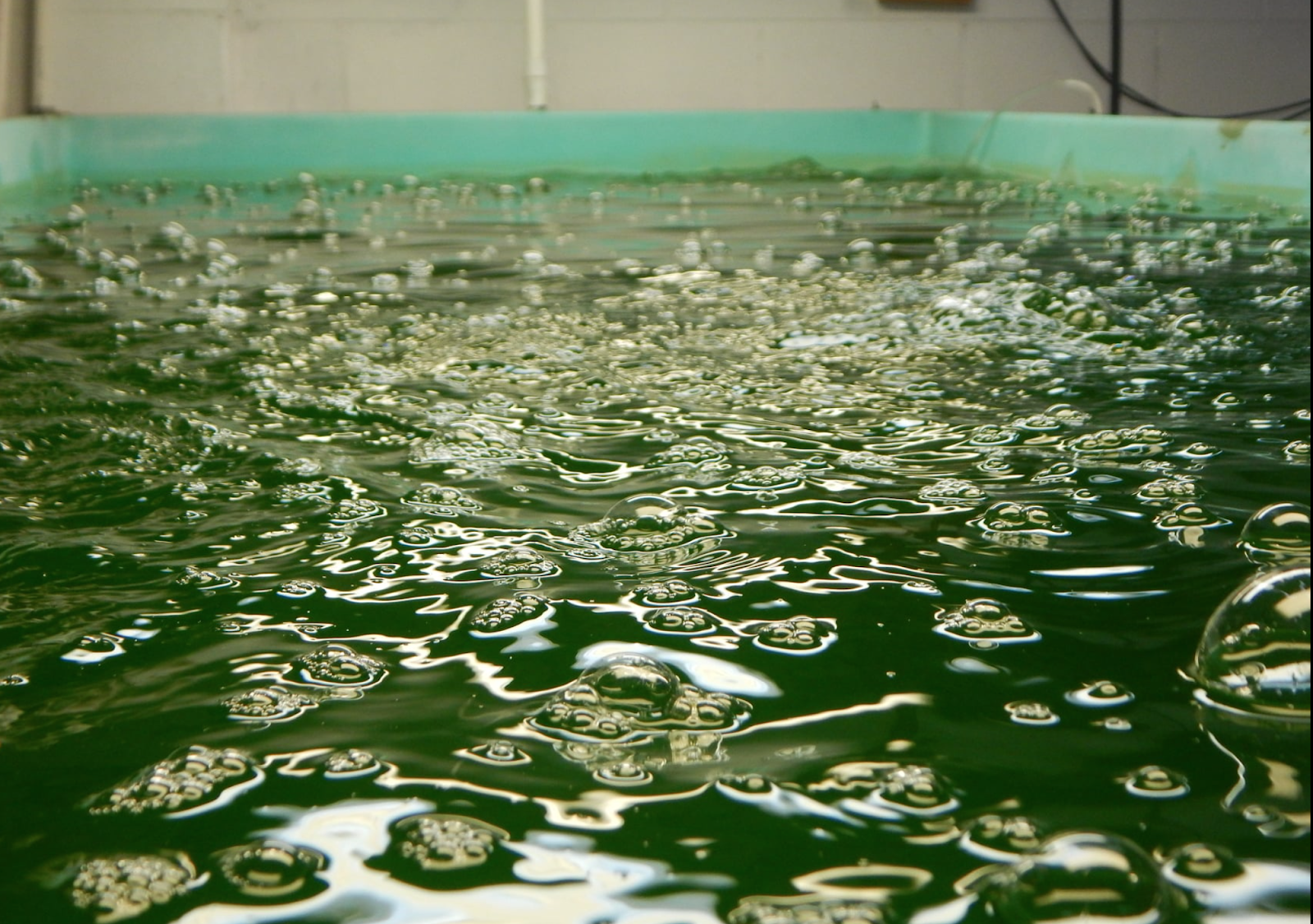 Tetraselmis can be cultivated in production systems crude to complex. Some examples ranging from big tank culture to kalwall tubes to continuous bioreactor systems. 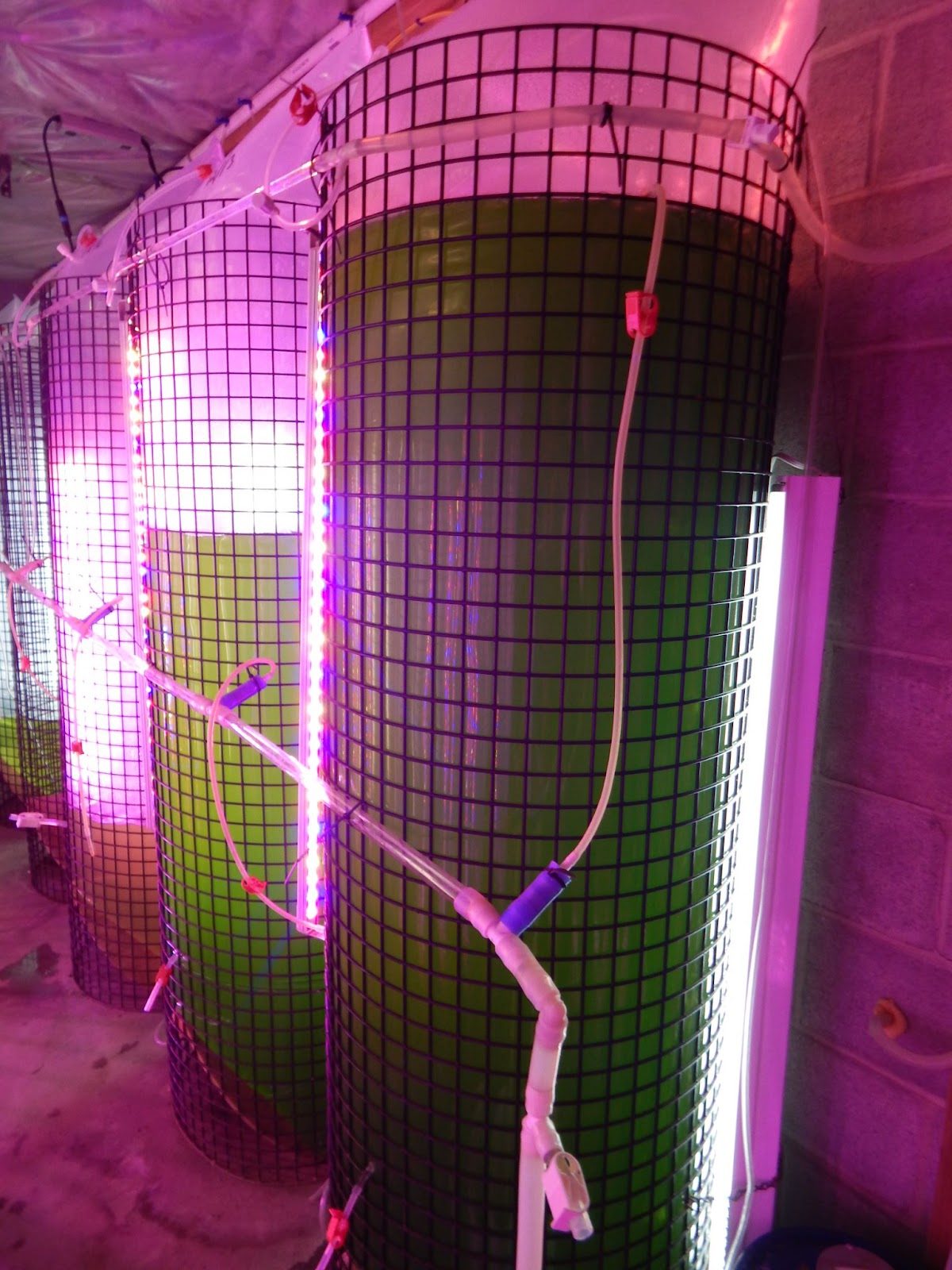 Tetraselmis chui has classically been used as a live feed for the larviculture of commercial shellfish species such as the eastern oyster, (Crassostrea virginica), hardshell clam (Mercenaria mercenaria), eastern bay scallop (Argopectin irradians) and European flat oyster (Ostrea edulis). It has also been used to rear the larvae of various tropical mollusc species such as giant clams (Tridacna sp.), gold-lipped pearl oyster (Pinctada maxima), Sydney rock oyster (Saccostrea commercialis) and the milk conch (Strombus costatus), as well as several marine tube worms in the Serpulidae and Spirorbidae. Abdelaty et al. 2021 used live Tetraselmis cells to rear the larvae of the tropical sea cucumber Holothuria scabra. Tetraselmis is especially helpful with these species when fed in the weeks/days prior to larval settlement as it provides sterols such as  24-methylenecholesterol and 24-methylcholesterol. These are made to construct hormones. It is becoming growingly known that such specific dietary cues derived from microalgae are crucial for successful metamorphosis.

“…high-lipid Tetraselmis strains supported significantly faster oyster growth than an equivalent ration of T-ISO. Doubling times for oyster weight, volume, and shell height were in the range of 1.5–3 weeks on single daily feedings of the best diets. Tetraselmis strains yielding the most rapid oyster growth contained higher contents of the essential fatty acid 20:5n − 3 and of the sterols 24-methylcholesterol and/or 24-methylenecholesterol. These data are consistent with our earlier findings that these compounds appear to be deficient in most phytoplankton for optimal growth of Crassostrea virginica spat.” (Wikfors et al 1996)

Tetraselmis’ most profound service to aquaculture allowed for breeding of seemingly impossible reef fish species to cultivate. It does this by enhancing the nutritional profile of zooplankton live feeds such as rotifers (Brachionus sp.), brine shrimp (Artemia sp.), ciliates (Fabrea salina), sea fleas (Moina sp.), harpacticoid copepods (Tisbe sp. Tigriopus sp.), cyclopoid copepods (Apocyclops sp.) and calanoid copepods (Acartia sp., Parvocalanus sp., Pseudodiaptomus sp.). If these zooplankton are fed to marine fish larvae while surrounded by live Tetraselmis cells, then they are constantly gut-loaded with lipids, sterols and other algae goodness. Living algae cells are also photosynthesizing algae cells–meaning they are actively absorbing ammonia, nitrates, phosphates and carbon dioxide.  Moreso, the living algae cells provide shade from light and reduce occurrences of larval gression/cannibalism. Using live microalgae cells for this nutritional/chemical/ behavioral modulation is a technique referred to as Greenwater Larviculture. And because of the immaculate abilities of chlorophytes, such as Tetraselmis chui, hundreds of marine species can now be reared completely in captivity. This practice has led to the successful aquaculture of fish species such as the mediterranean sea bream (Sparus aurata),  melanurus wrasse (Halichoeres melanurus) and leopard grouper (Plectropomus leopardus) to name but a few. Perhaps most notably was the contribution of Tetraselmis chui as a live feed in the aquaculture of the pacific blue tang (Paracanthrus hepatus) by Dimaggio et al in 2017 at the University of Florida. Such frontier cultivation efforts have ushered in a new age of sustainable aquaculture and sustainable reef keeping. 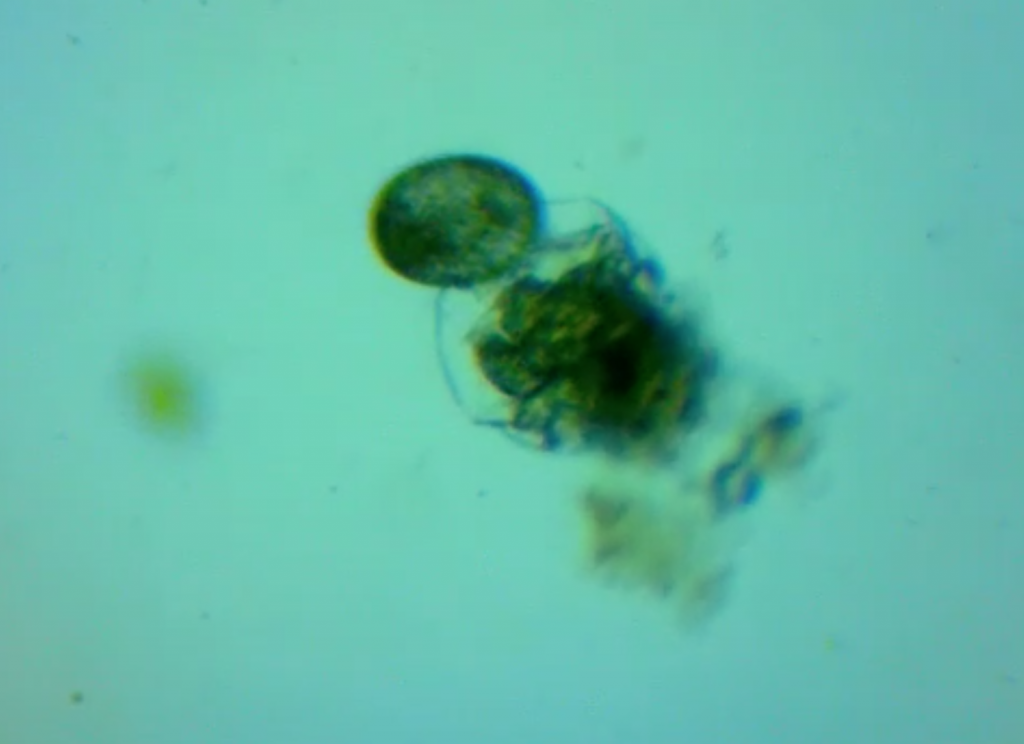 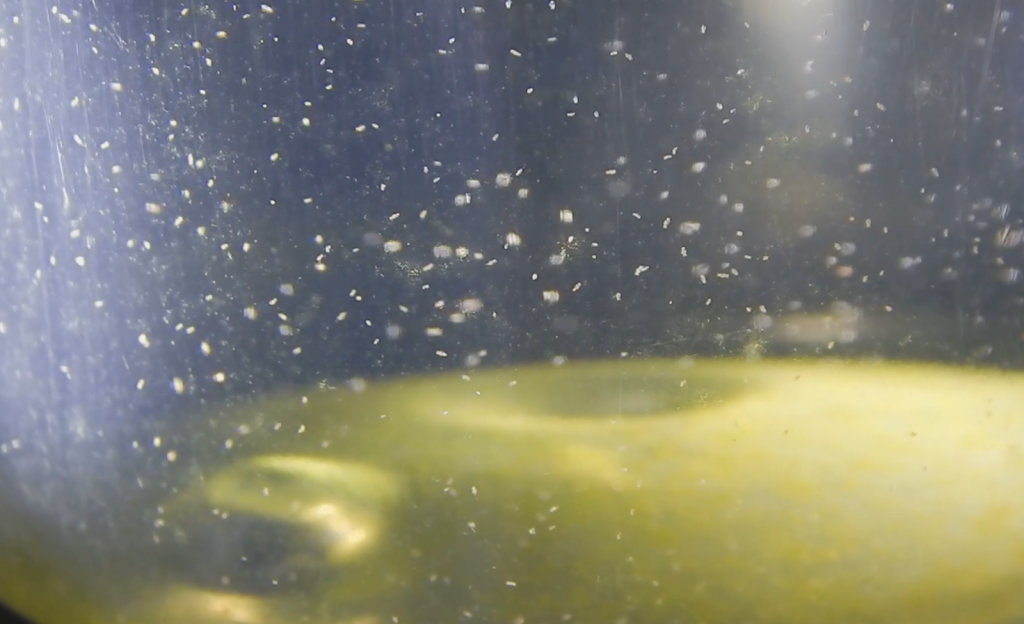 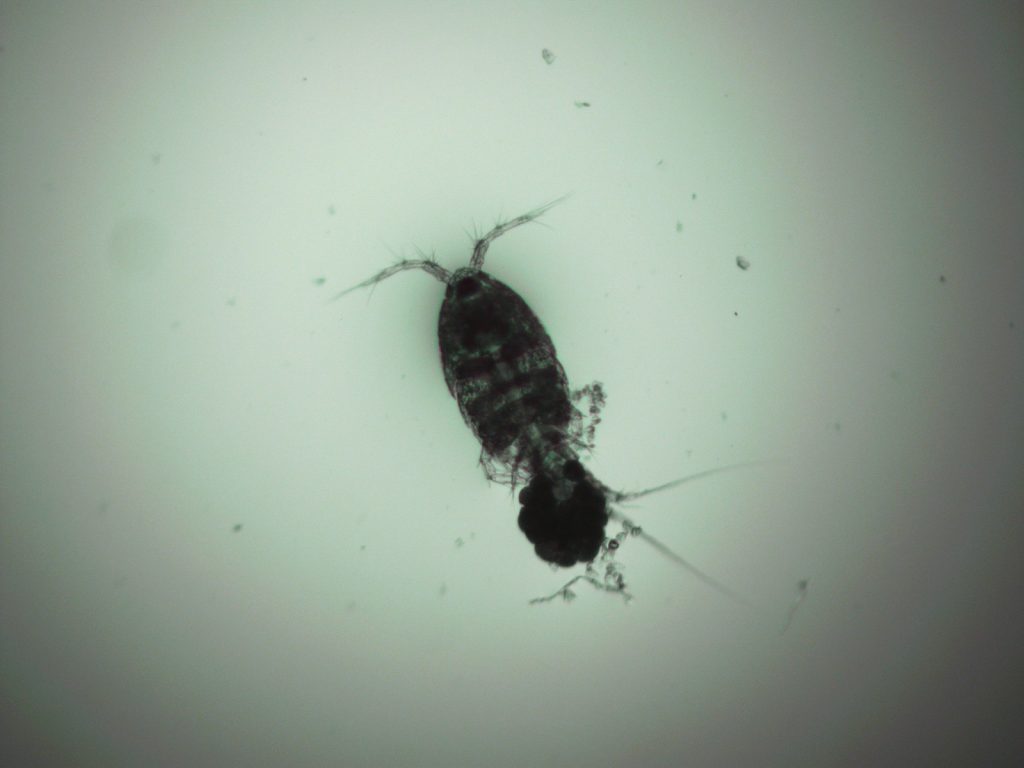 Tetraselmis can be used to rear a wide variety of zooplankton live feeds. 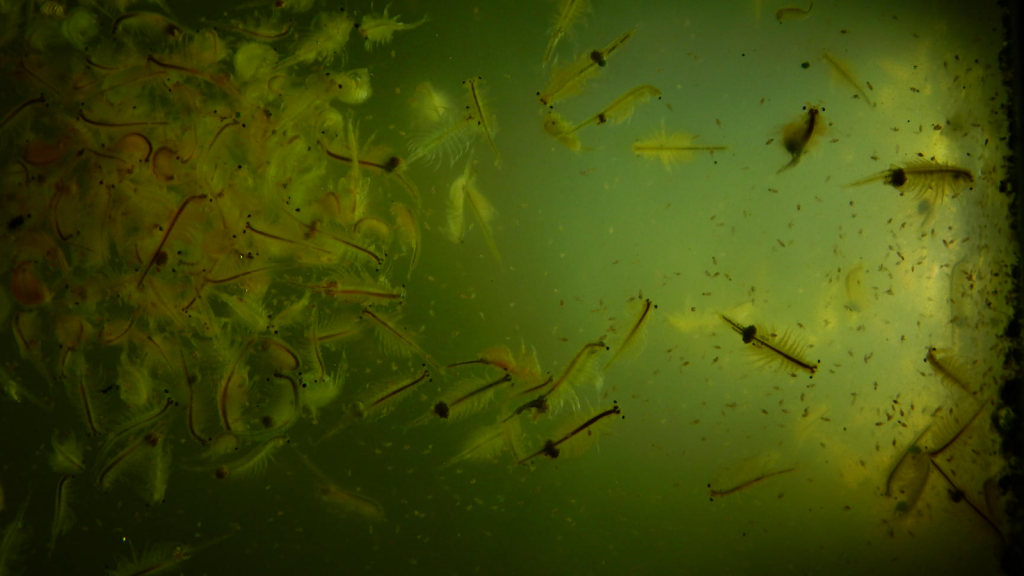 Tetraselmis chui in the Reef Aquarium

Live Tetraselmis chui cells are a truly ‘functional’ food in the reef aquarium. Not only do they enhance nutrition to any copepods, rotifers or artemia fed to the aquarium, but microalgae cells can and will be directly consumed by a wide variety of corals and invertebrates. In suspension, microalgae cells can be grazed on sponges, porcelain crabs, sabellid worms, clams and corals. What few cells that may form a biofilm act as an incredible nutrition source for clean up crew snails, conchs and urchins. Just like in greenwater larviculture, every second a living Tetraselmis cell goes uneaten, it eats. Only it feasted upon dissolved phosphates, nitrates, ammonia, carbon dioxide. The general environmental conditions of a reef aquarium (high light, high salinity, low nutrients) encourage living cells to grow and develop large reserves of golden PUFA fats.

It is well documented but rarely celebrated that microalgae can grow heterotrophically and act to directly consume waste organic carbon. This combined with its aggressive photosynthetic potential, makes Tetraselmis a great wastewater processing species. Many successful trials have demonstrated the ability of both suspended and stationary Tetraselmis cells to strip nutrients and even heavy metals from aquacultural/agricultural, municipal and industrial wastewater. In the aquarium, this thought process can be translated into the recycling of water change wastewater. Rather than releasing it into local sewer systems or dumping it outside, this expensive waste can be sterilized and added to a phytoreactor–reclaiming at least some of the lost resource. El-Sayid et al 2020 identified Tetraselmis chui as a ‘promising marine algal candidate for the dual use of petroleum wastewater treatment and biodiesel production’. Who knows…perhaps the reef aquariums of the future will be powered by algae-generated electricity! 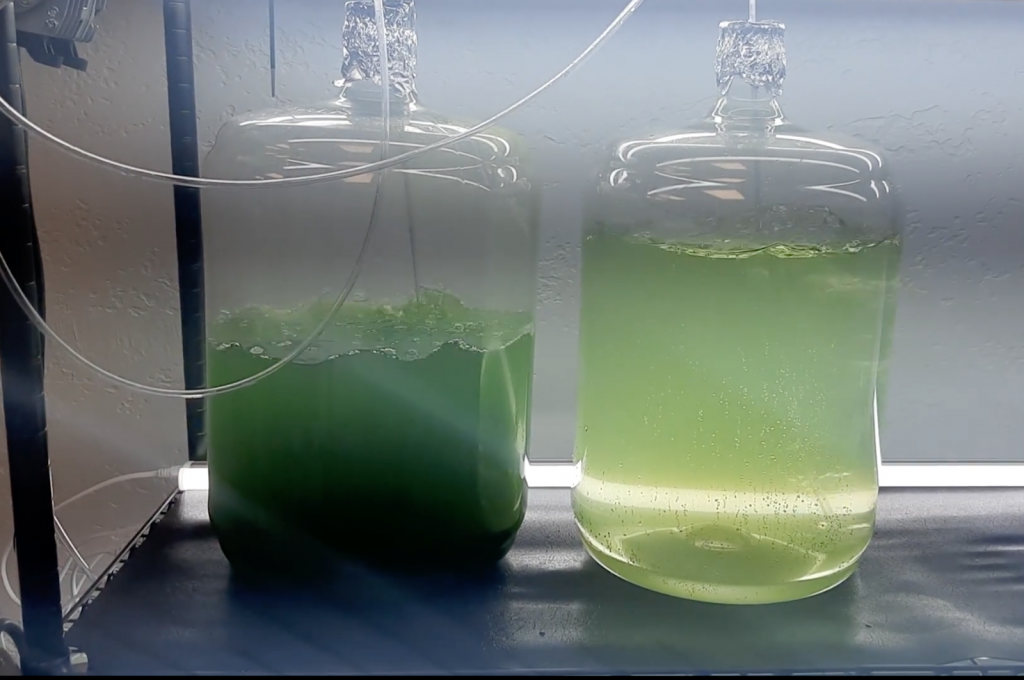 Can Tetraselmis play a role in resolving coral disease? 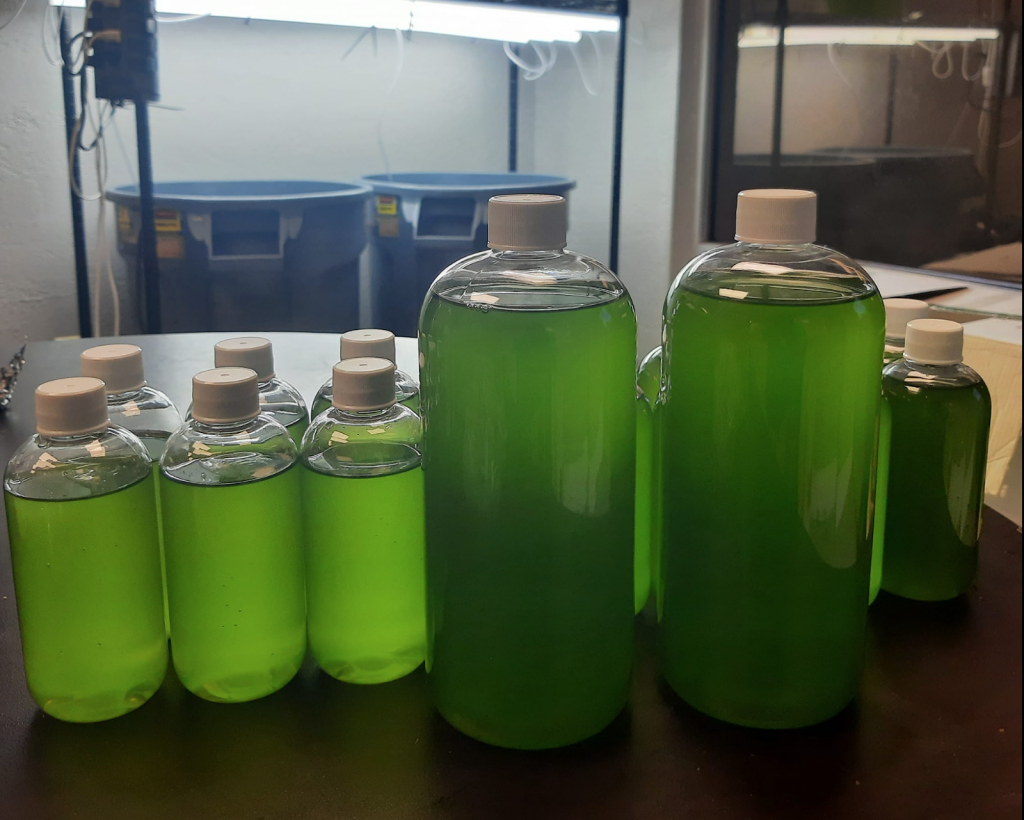 Live Tetraselmis cultures are becoming growingly available as consumers are realizing the value of bioactive aquarium additives and more producers are entering the market. 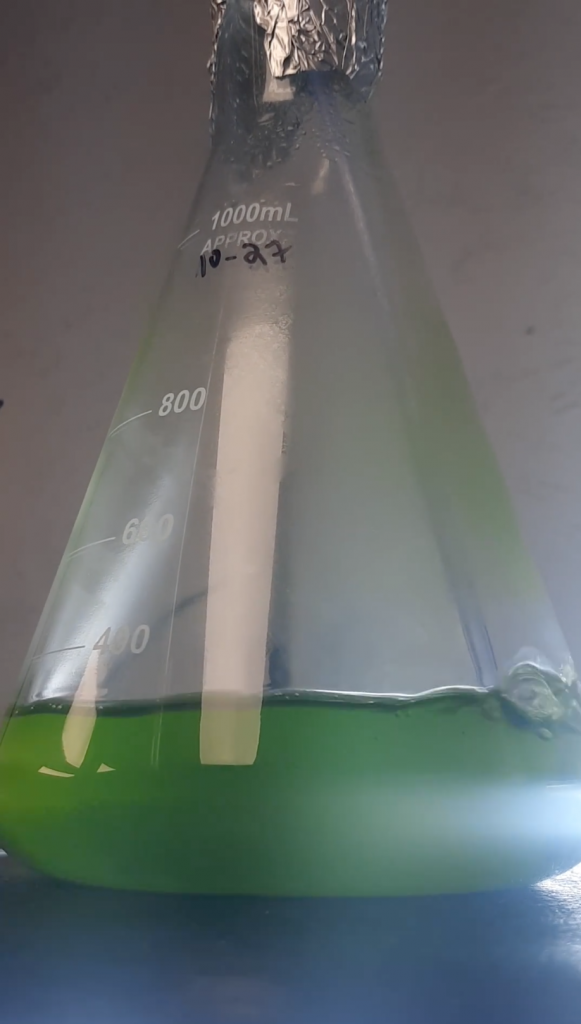 Tetraselmis chui is a Green Phyto of unbelievable promise to both the reef aquarium industry as well as global commercial aquaculture. Few of the millions of algae species have that sweet combination of rapid growth, elastic environmental tolerances and lipid-rich nutritional profile. This microalgae species will allow for the cultivation of many more species…not only reef fish which desperately need to be aquacultured, but all sorts of filter feeding organisms previously unavailable to the hobby altogether. Grown on a small scale, it can be used to deliver a bioactive feeding to even the smallest-mouthed reef inhabitant. On a large scale, it has the potential to cleanse wastewater and push the hobby…and industry into a Greener Age.

Suchar, V. A., & Chigbu, P. (2006). The effects of algae species and densities on the population growth of the marine rotifer, Colurella dicentra. Journal of experimental marine biology and ecology, 337(1), 96-102.