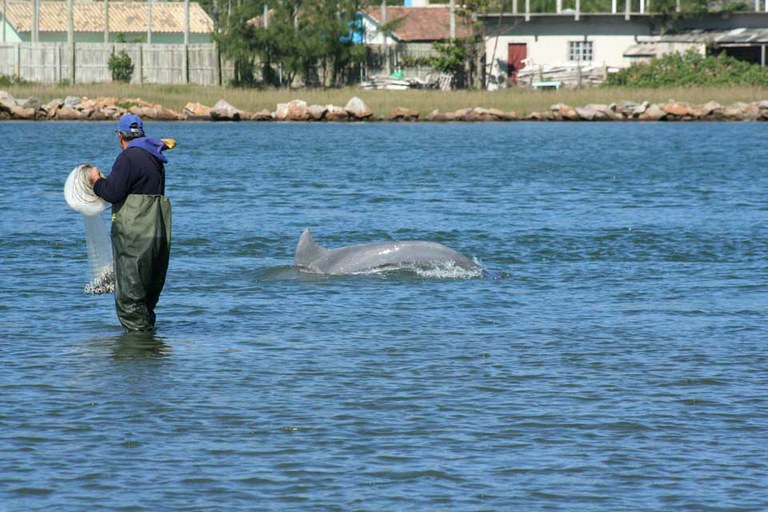 A dolphin herds mullets toward a fisherman in Laguna, Brazil. Photo by Fábio Daura-Jorge.


Every fall the fishers of Laguna, Brazil cast their nets in the local lagoon hoping to capture small silver fish called mullets.  Normally net fishing is a hit or miss endeavor. However these fishermen have an aquatic ally: a group of local bottlenose dolphins (Tursiops truncatus). What happens is the dolphins in this lagoon herd mullets toward local fishermen and with a characteristic head or tail slap indicate when the fishermen should cast their nets. When the nets are pulled up, they are writhing with mullets. Capturing fish in this way is apparently a sight to behold and without these helpful dolphins, the fishermen would have a much harder time catching the same amount of fish. This coordinated fishing activity has happened for generations and begs the question: why would a group of dolphins help humans with fishing and what benefit are the dolphins receiving from this behavior?

A group of researchers led by Fábian Daura-Jorge wondered these exact questions and detailed their findings yesterday in in the journal Biology Letters.

The scientists learned that not all of the lagoon’s dolphin population take part in the coordinated fishing activities. Only one-third of the local dolphin population of 50 actively help. The other two-thirds hang back and do not participate in the herding behavior. Daura-Jorge’s group learned that the dolphins that exhibited this coordinated behavior also tended to have more close associations together leading the researchers to speculate that the helpful fishing behavior is, in fact, a learned behavior.

Dolphins with tighter bonds, [Fábian Daura-Jorge] explains, might be more inclined to pick up each other’s unique behavior. Dolphins and their close relatives certainly can swap unique behaviors from animal to animal, scientists say. Young dolphins living in Australia’s Shark Bay, for instance, learn from their mothers how to cover their noses with dead sponges—a nifty trick that keeps them from getting scraped.

During the course of the study, mother dolphins in this group were also observed to nudge their young toward mullet suggesting that the mothers were trying to teach their young how to coordinate fishing tactics.

Nevertheless, the coordinated fishing tactics between the bottlenose dolphins and fishermen are vitally important as without this helpful relationship, the fishermen could not make a living from fishing.